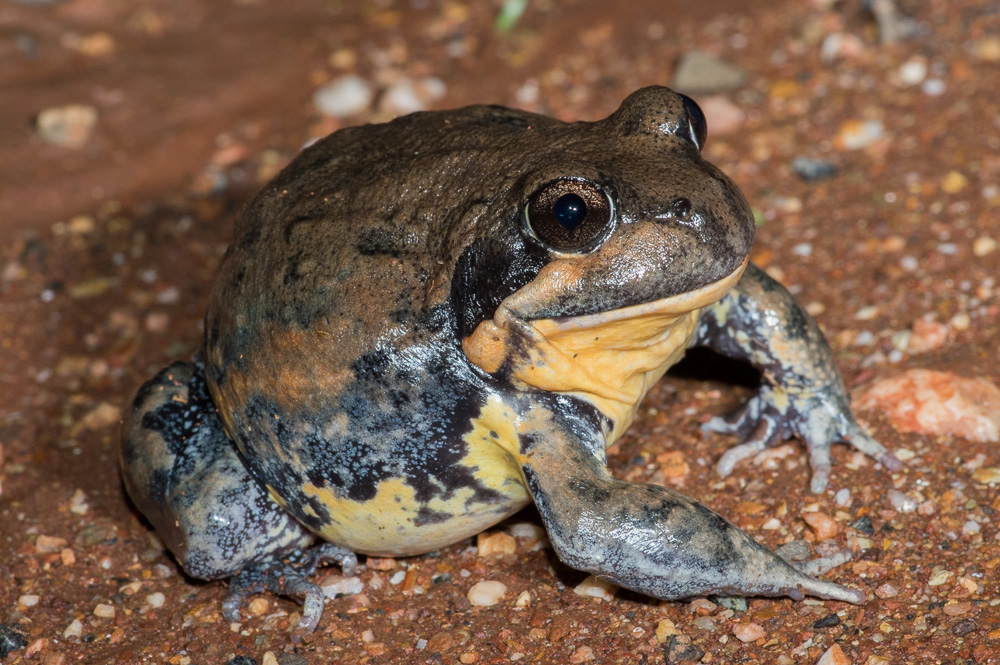 In what proved to be an auspicious start to the February 2014 trip, the rain began to pour down as we reached the foothills of the Blue Mountains. It kept raining as we passed the western slopes of the mountains and out onto the plains. By Nyngan, where we stopped for dinner, we were out of the worst of it, but there had been just enough to fill some puddles beside the road. This provided the opportunity for the first of many opportunistic frog observations of the trip, with several species calling from the roadside about 50 km towards Bourke (Litoria rubella, L. caerulea, L. peronii, L. latopalmata, Uperoleia rugosa, Limnodynastes dumerilii).

The skies on the following day, as butcherbirds sung us awake, proved clear – but we were to pass through some pretty wet areas as we traveled into Queensland and out to the west of the state. The back-road stretch between Cunnamulla and Quilpie via Eulo turned out to be a bit ‘interesting’, with significant water flowing slowly across the road in several places. The Hilux forded the waters with no problems, and we made it through to Windorah in the early evening. 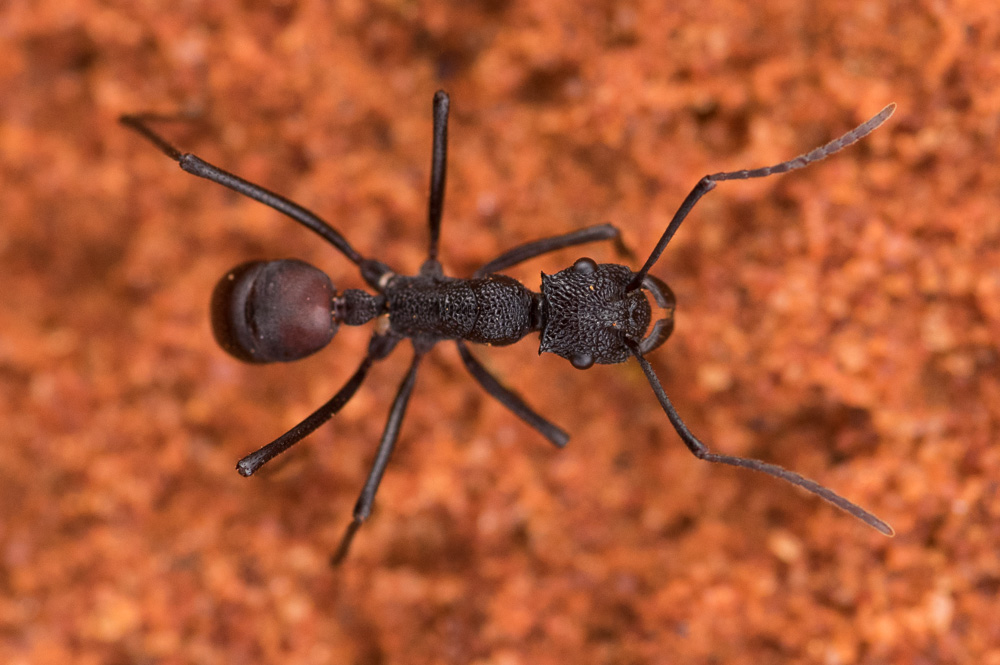 We were not the only ones who had been enjoying the frogs the night before – a road-killed Mulga Snake (Pseudechis australis) had two Knife-Footed Water Holding Frogs, Cyclorana cultripes, lined up in its gut.

The third day of driving took us from the Cooper’s Creek at Windorah through the long stretch of channel country to Bedourie then onwards to Ethabuka. The properties along this last leg had been blessed with a little rain, but as seems like the usual state of affairs, Ethabuka was dry.

We arrived at camp, set ourselves up, and began the work of the trip. This consisted of two trapping sessions of three days each, trapping five long term grids at Main camp. In addition, Eveline conducted an experiment looking at predation on two species of dragon using plasticine models.

The weather was variable over the course of the trip. In contrast to the baking heat of the November trip, we had relatively cool weather with only a couple of warm days early on, 39° C being the highest we recorded. The sunny days soon gave way to overcast skies and showers, and in the second half of the trip we had a steady drizzle for a couple of days. The flies were pretty terrible for the duration of the trip.

Compared with recent trips, pitfall trap captures showed a familiar pattern in most regards. Rodents are almost non-existent at the moment: only a single Sandy Inland Mouse (Pseudomys hermannsbergensis) was captured. Marsupials are present in moderate numbers (eight individuals from three species; the highlight being a tiny but tenacious Ningaui ridei.

Reptiles formed the bulk of the captures – 73 animals including skinks, dragons, geckos and a couple of legless lizards.

The stars of the trip were surely the desert frogs. We were lucky enough to capture or spot the two most common species in the study area, namely the Desert Spadefoot frog (Notaden nichollsi; 17 captures) and the Trilling frog (Neobatrachus sudellae). The latter species was spotted in small numbers along the shot-line road in the swale, while the former was present up on the sandy dune tops. We even saw a few individuals in the process of emerging from the sand. One interesting observation was coming across three (possibly more) frogs burrowing out of the sand within centimetres of each other – had they been huddled together subterraneously?

With only a thin film of water sitting on the clay pans, there weren’t any breeding sites around for these frogs, so instead they settled on the next best activities – eating and hydrating. The large number of termites on the surface provided an easy meal, and the wet sand allowed the frogs to soak up an extraordinary amount of water, leaving them thoroughly bloated. After burrowing back into the sand, this stored water might be all the frogs have access to for a very long time.

The models survived the long transit to Ethabuka well in their pizza boxes and were set out the day after arrival. The experimental set-up hadn’t changed from November 2013. A total of 300 models consisting of 150 military dragons (Ctenophorus isolepis) and 150 central netted dragons (C. nuchalis) found their way to two macro habitats (burned and unburned), five micro habitats (open, under spinifex, near spinifex, on wood and in leaf litter) on a 20 km stretch of the shot-line road. Predation was immediate and from a diverse assemblage of culprits: rodents, dasyurids, reptiles, birds and one cat tried their luck. A total of 45 models (15%) were attacked, over half of those in the first two days of the experiment.

The most striking attacks were performed by a very enthusiastic bird, very possibly one individual. Over a stretch of 1.5 km it attacked eight of the ten models and disappeared with half of those. We found one body under a large tree 80 m from the original site, very mangled indeed. Of the others, only a tail was left as evidence.

Another of the tasks of the trip was to attempt the retrieval of some GPS collars that were placed on cats in April 2013. These devices record location data for several months then automatically detach, after which they can be located and retrieved from an emitted VHF signal. We’ve had some trouble getting any signals from collars placed on cats, but were able to pick a signal up while doing an aerial search from a fixed wing aircraft in September. In November we relocated the signal, and the device detached from the cat in December.

This trip, we spent most evenings listening for signals from dune tops in the area around Main Camp. Despite some initial misgivings, the collar heard in November was relocated a number of kilometres away, and the collar was tracked down and collected. No signals from the other two collars were heard. 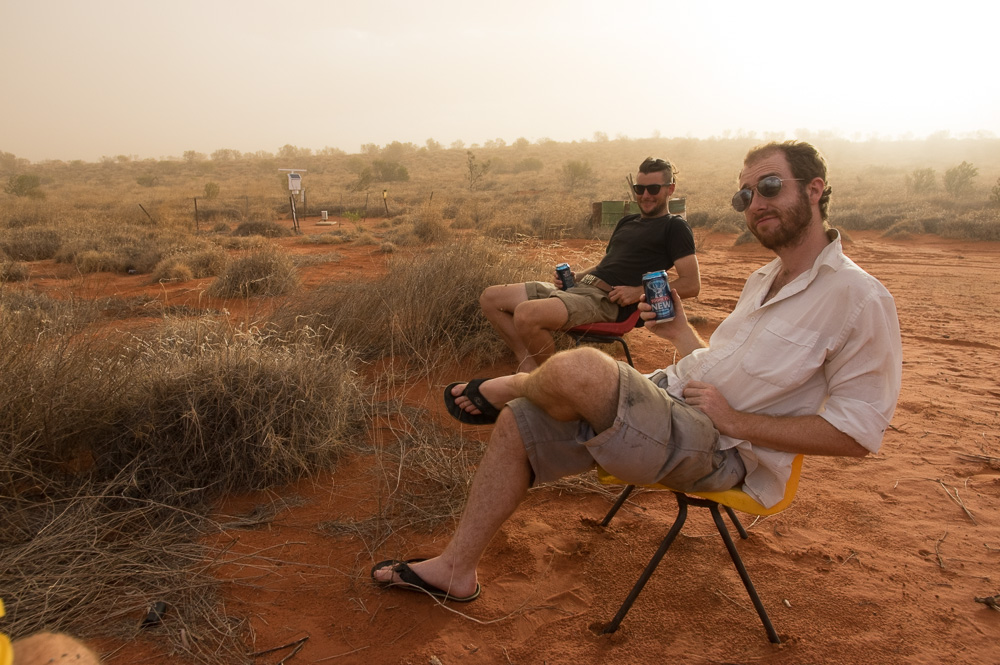 With the models collected, the traps closed and swags rolled, it was time to leave the Simpson behind us and head back to Sydney. However, we weren’t sure how easy the journey would be. Every morning we’d listened to a long list of road closures, flood warnings and river heights on the local radio, and it seemed like we’d have to pass through some pretty sodden country to get home. We made some enquiries by phone, and formulated a plan. The road from Bedourie to Windorah was closed, with a metre of water over the road at Farrar’s creek channels, so that was going to be out for some time (indeed, at the time of writing on 14/3 this road is still closed). To the north, the Plenty-Donahue was closed and the Georgina flowing. However, if we could get out to Bedourie, we should be able to get up to Boulia. From there, the road was all sealed, so would hopefully be open through to Winton and we’d be fine from there.

The first part of the plan worked well. The road out to Bedourie had obviously seen a fair bit of rain, to judge by the deep wheel ruts left by other vehicles, but a couple of days of sun had dried it out considerably and we got out with no problem. We passed through Bedourie and headed to Boulia – also an area that had seen a fair bit of moisture but was passable.

We reached Boulia and hit a snag. The road to Winton was closed. We asked around and learned that water was flowing fast and about 70cm deep over the road at the Hamilton channels about 70km out of town. This was enough to halt our progress so we considered our options over a meal at the pub, deciding to wait and see if the water fell overnight. We woke to pouring rain (to the jubilation of the locals) and no suggestions of the water receding. Nobody wanted to get stuck in Boulia, so we took the only road open to us and headed north towards Mt Isa. More than just a little out of our way. 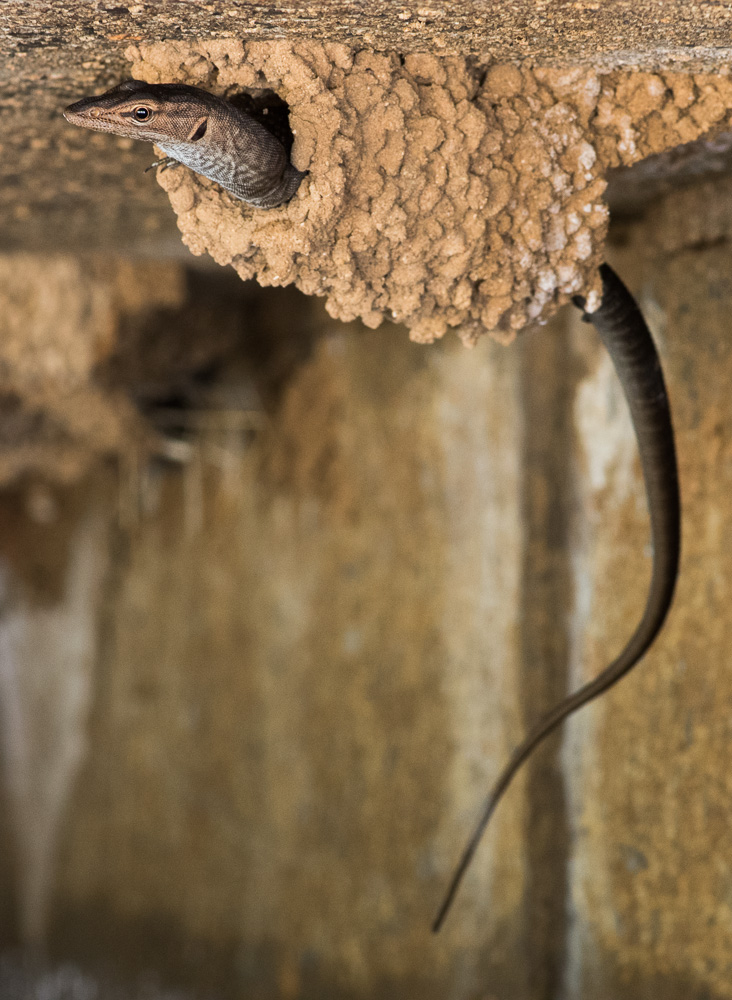 As the vibrant green blacksoil plains changed to rocky spinifex hills and tropical savannah, we couldn’t help thinking the sobering thought that every kilometre we travelled was taking us further from Sydney. There were perks along the way, however. At a bridge near Boulia we stopped to look at Spinifex Pigeons when a slender black shape ran off the edge of the bridge and splashed into the water below. It was a Black-Headed Goanna, Varanus tristis, and it climbed out of the water under the bridge and into the abandoned mud nest of a Fairy Martin. This goanna is very agile and reportedly often climbs into nests to prey on the eggs or chicks of this bird. A little further down the road, a large shape sauntering across the road turned out to be a beautiful Yellow-Spotted Goanna (Varanus panoptes), powerful and impressive. 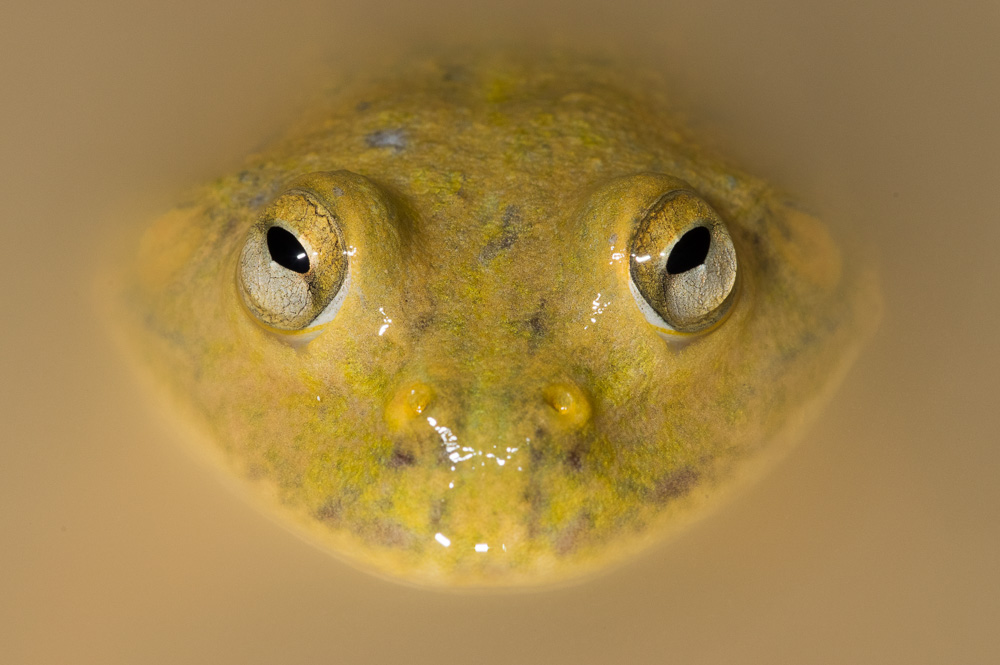 And of course, there was more frogging. At the flooded channels near Boulia, we came across more arid-zone species attempting to reproduce. The calling frogs included Cyclorana cultripes, the Knife-footed water-holding frog, the Desert Treefrog (Litoria rubella), Torrid froglet (Crinia deserticola), and to top it off, the iconic Water Holding Frog (Cyclorana platycephala), a species adapted to survival in arid conditions but also an adept aquatic predator, possessing dorsally-oriented eyes, webbed feet and the ability to feed underwater.

As we gradually drove south and east across the continent towards Sydney, we were able to reflect on the moments that made the trip (and all DERG trips like it) so enjoyable. Not only were we able to participate in research looking at important ecological questions, but we were exposed to many fascinating animals, beautiful and diverse habitats, and natural history moments.