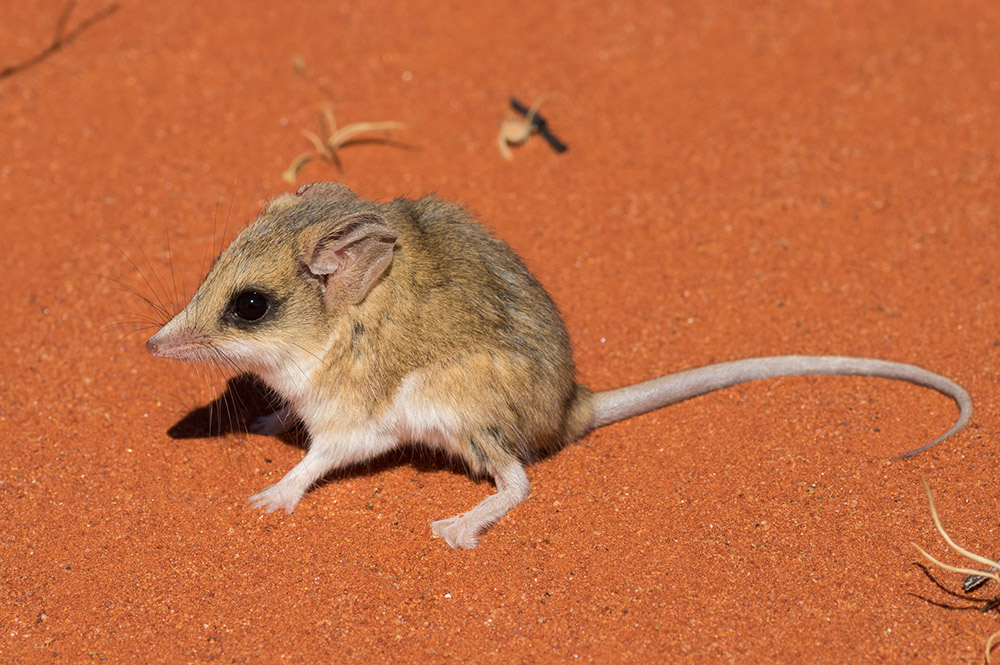 Driving through western Queensland on the way to the Simpson, it was clear that the late summer rain we’d experienced on the February trip had been patchy throughout the region, with some areas looking green and lush, and others still firmly in the grip of the dry period. One surprise was learning of the flow in the Mulligan River on Ethabuka, apparently occurring only a matter of days after we departed the property. This timing was a stroke of luck, as with both the Mulligan and the Georgina rivers flowing, we wouldn’t have been able to get out of the desert for some time. Learning from the crew of trip 1 about Pulchera waterhole being full, we resolved to visit this beautiful spot.

We rolled into the sandhill country on Ethabuka station and headed to Main Camp, our base for the first trapping session. We opened eight trapping grids – at Shitty Site (SH 4,5), Carlo (CS 2,5), Way site (WS 1,2) and South Site (SS 3,4). Trapping was to occupy us for the morning, followed by Veg plot surveying, camera and weather station downloading. When the traps were closed, it was time to survey and re-apply nutrients to the Nutnet sites that were set up a year ago at Main Camp and South Site. 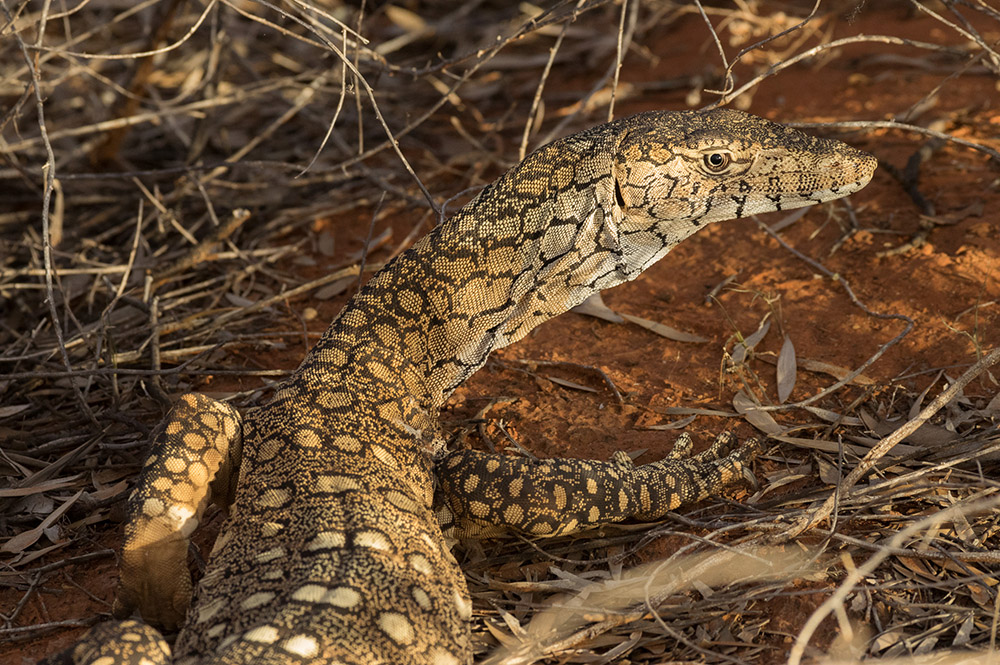 Over the course of the trip, 15 sites were set up in a variety of vegetation types, including mulga, gidgee, lignum swamp and of course, hummock grassland. 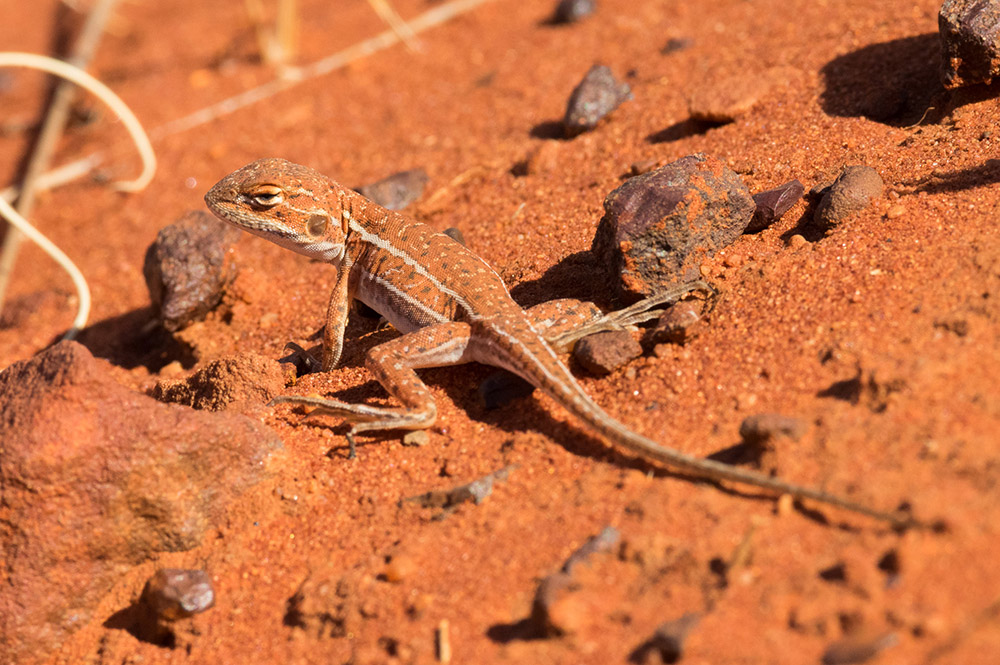 On the night of the 30th, a dust storm enveloped us from the south, bringing with it cold weather. The daytime maximum temperature dropped from 38° C to 25° C, with a commensurate overnight chill. The only notable upside to this cool weather was that the flies found it too chilly to be active first thing in the morning, giving us a welcome, if temporary, respite.

On the 2nd of May, a team led by Dave drove out to Tobermorey station, while the rest of the crew, sans Ausplots and Glenda (who were to follow the day after), headed out to the Field River. Thus began the second trapping session of the trip (TBE 1,2, TBW 3,4, FRS 2,3, FRN 1,2).

At Tobermorey West, a number of traps still needed re-fencing following the recent fire, so this was completed prior to opening. At camp, the team was treated to a rare sighting – a Perentie (Varanus giganteus) strolling through the area. This species of goanna gets up to two and a half metres long – so this one was still relatively small at about a metre and a half.

After this trapping session, the Tobermorey crew relocated to Kunnamuka swamp on Cravens Peak’s southern border (trapping KSE 2,3 and KSW 1,2), and the rest of the group drove from Field River to camp at Ocean Bore (trapping PP 0,1 and CP 1,2). 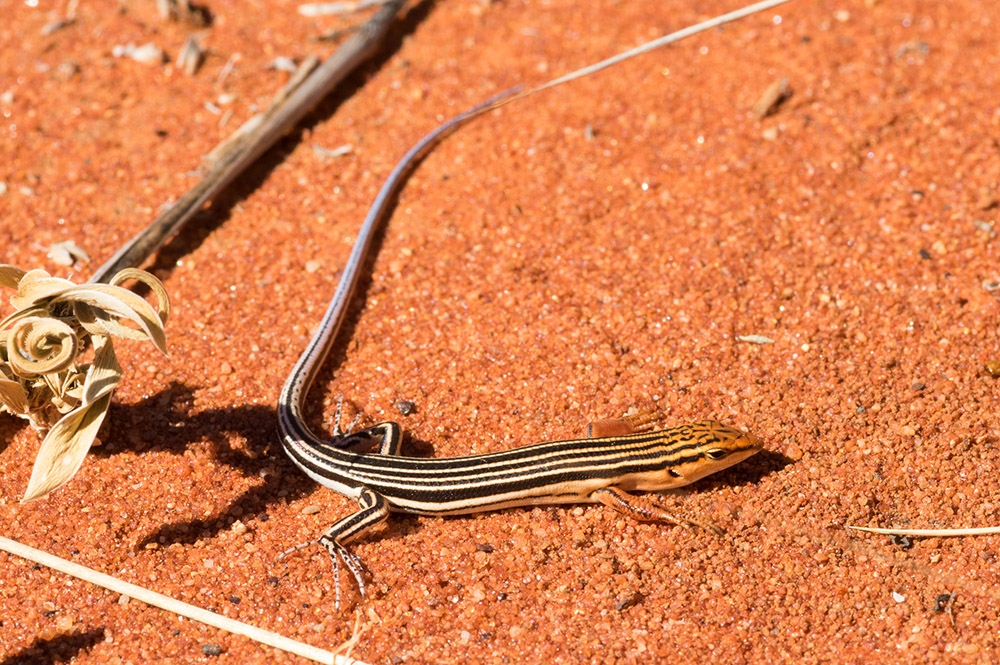 In the Kunnamuka swamp area, Dave’s group was lucky enough to see one of the natural history highlights of the region. The Blue-tailed skink is captured occasionally in pitfalls, but to see its trick, one needs to come across the animal in situ – as we did one afternoon, and again a couple of days later in the late morning. The small skink was travelling around on the open sand, flailing, lashing and wriggling its light blue tail. Sometimes it seemed to be using it as a visual lure, directing it towards the edges of spinifex clumps; sometimes it also tapped its feet on the sand. One explanation often reported is that the vibrations can lure termites to the surface. On one occasion the skink was also seen squeezing itself down into a burrow in the sand – possibly into a termite gallery. For a video of the skink’s behaviour, see http://youtu.be/BR-GR_dsABQ

The summer rainfall has only been about 100 mm – not enough for a big burst of plant growth, flowering and seeding. The February-March rainfall had, however, been just enough to bring a few things up. Spinifex tussocks had seed heads here and there, though most seed cases were empty, so very little seed had actually set. Some other grasses had done well and were seeding successfully, such as Paractaenum refractum (on the dune tops) and Aristida contorta. The most recently burnt area at Main Camp North had a significant number of recently germinated small forbs and grasses. Generally though, there was little flowering or seeding from perennial vegetation.

Tony and Michael investigated the bees visiting what was flowering, managing to fill some gaps in their collections of new species, get records of what species were present and make behavioural observations. In addition to this, ‘bee nests’ in the form of pre-drilled hardwood blocks and bamboo were placed at Field River and Main Camp. 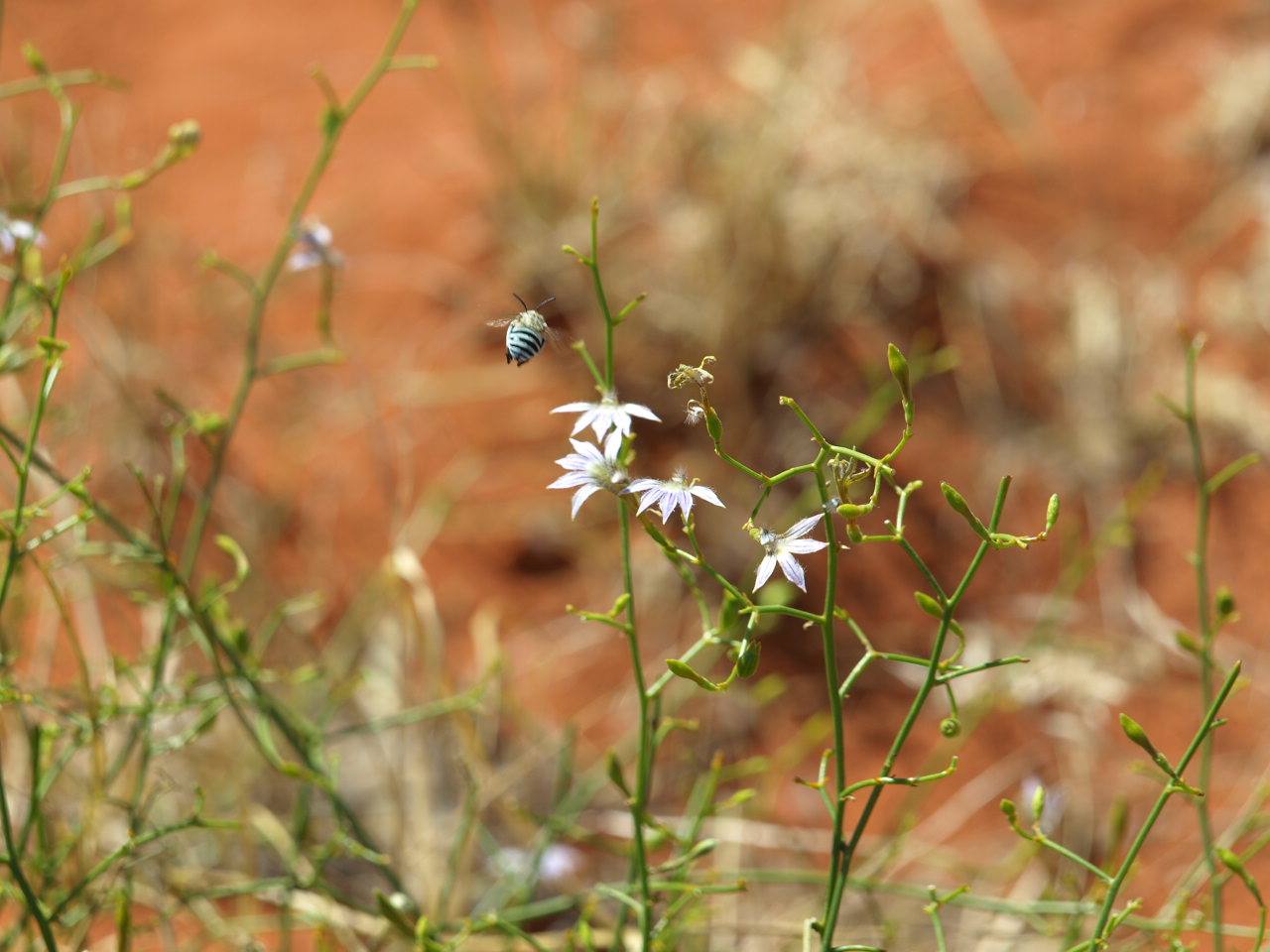 Reptile captures were dominated by small skinks and neonate dragons. There was a definite drop-off in reptile numbers after the first trapping session, no doubt reflecting the fall in temperatures experienced at this time. 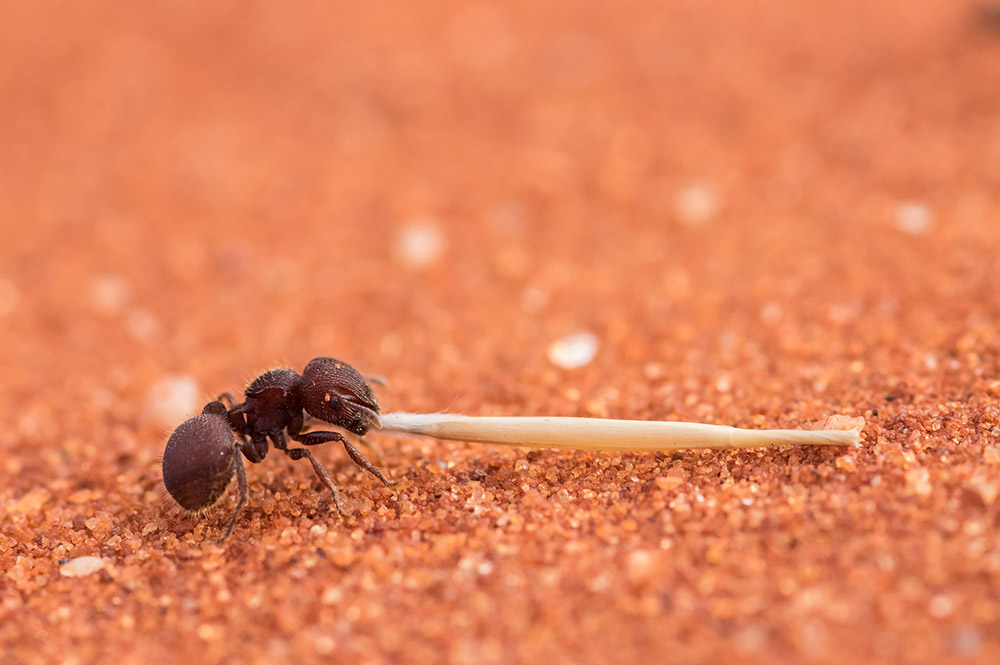 Aaron wanted to try and beat Ayesha’s bird count from trip 1 of 52 species. He saw or heard a total of 61 species for the trip, but could not beat Ayesha in the rare bird stakes – grey falcon and yellow chat!

Mammal numbers, particularly the rodents, are still down, and showing no real sign of recovery. Notably, a couple of Mulgaras (Dasycercus blythi) were captured at Way Site and Field River South – always a highlight. Feral cats and foxes also appear to be scarce, with no observations made during spotlighting runs, and only occasional tracks seen.

After the third and final trapping session and the departure of the Ausplots crew, the teams reconvened back at Main Camp to swap stories, finish up remaining bits of pieces of work, and prepare for the journey back to Sydney.

Before leaving Ethabuka to begin our drive home, we called in at Pulchera for the afternoon. The largest waterhole on the Mulligan River, Pulchera had been bone dry for at least a year. With the rain in March and the flow in the river, the waterhole was once again an oasis. We spotted thirteen species of waterbirds – stilts, avocets, waders, ducks, swans and a group of Brolgas. The cool water offered the opportunity for a refreshing dip – welcomed by those brave enough to enter. 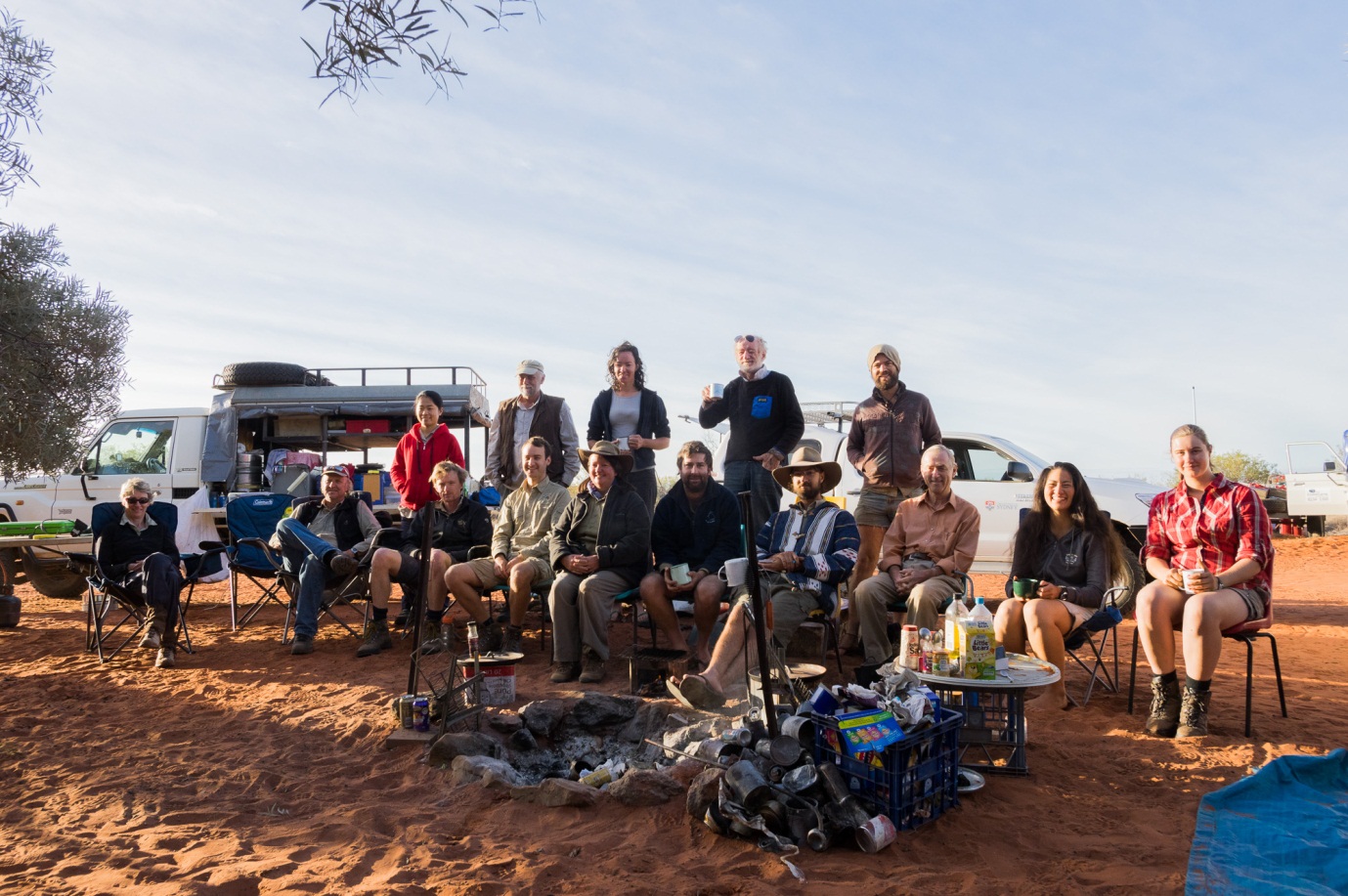