As winter 2013 approaches, another team of Desert Ecology Research Group (DERG) staff and volunteers has returned from the Simpson to wash the red dust, diesel and olive oil stains from their clothing and pluck stubborn spinifex spines from their skin. It was a bumper trip, both in terms of the number of vehicles and attendees present and the work completed, though it’s definitely a ‘bust’ season out there. 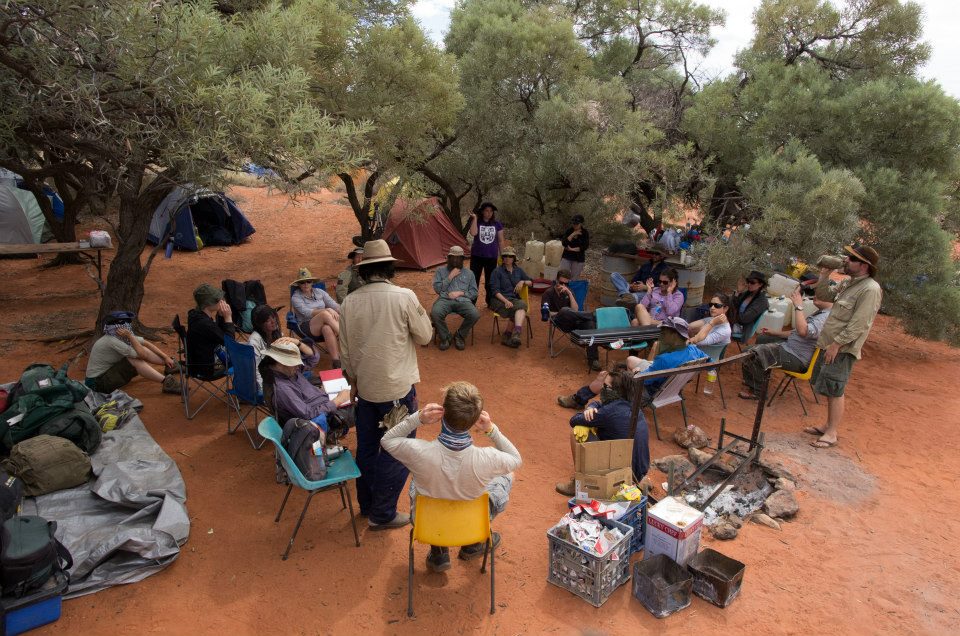 Five vehicles (four DERG Hiluxes and Tom’s Landcruiser ute) carrying 22 passengers made their way through the gate onto Ethabuka on the 5th April, after an uneventful drive from Sydney. The amount of gear was considerable, including several large rolls of wire netting, wire and star pickets of various lengths, on top of the usual equipment.

The whole team was only at Main camp for one night before one crew left for the North – Aaron Greenville took Sam Travers, Miguel Bedoya, Flo Tapias and Nacera Hamour to camp at Coolibah Creek and trap CS 2 and 5. Next, they would stay at Ocean Bore and trap Cravens Peak (CP 1 and 2) and Plum Pudding (PP 0 and 1), then Norrie’s bore (NB 1 and 2). Number 3 bore would be their final camp (trapping grids 1 and 2) before joining the rest of the group back at Main camp on the 19th.

Many of these grids had been burnt – some of them while the traps were open during the November 2011 trip. Thus the team had their work cut out for them and were required to dig out and flip many melted pitfalls as well as repair drift netting. Those grids at No. 3 bore still require about 1/3 of the netting to be completed. 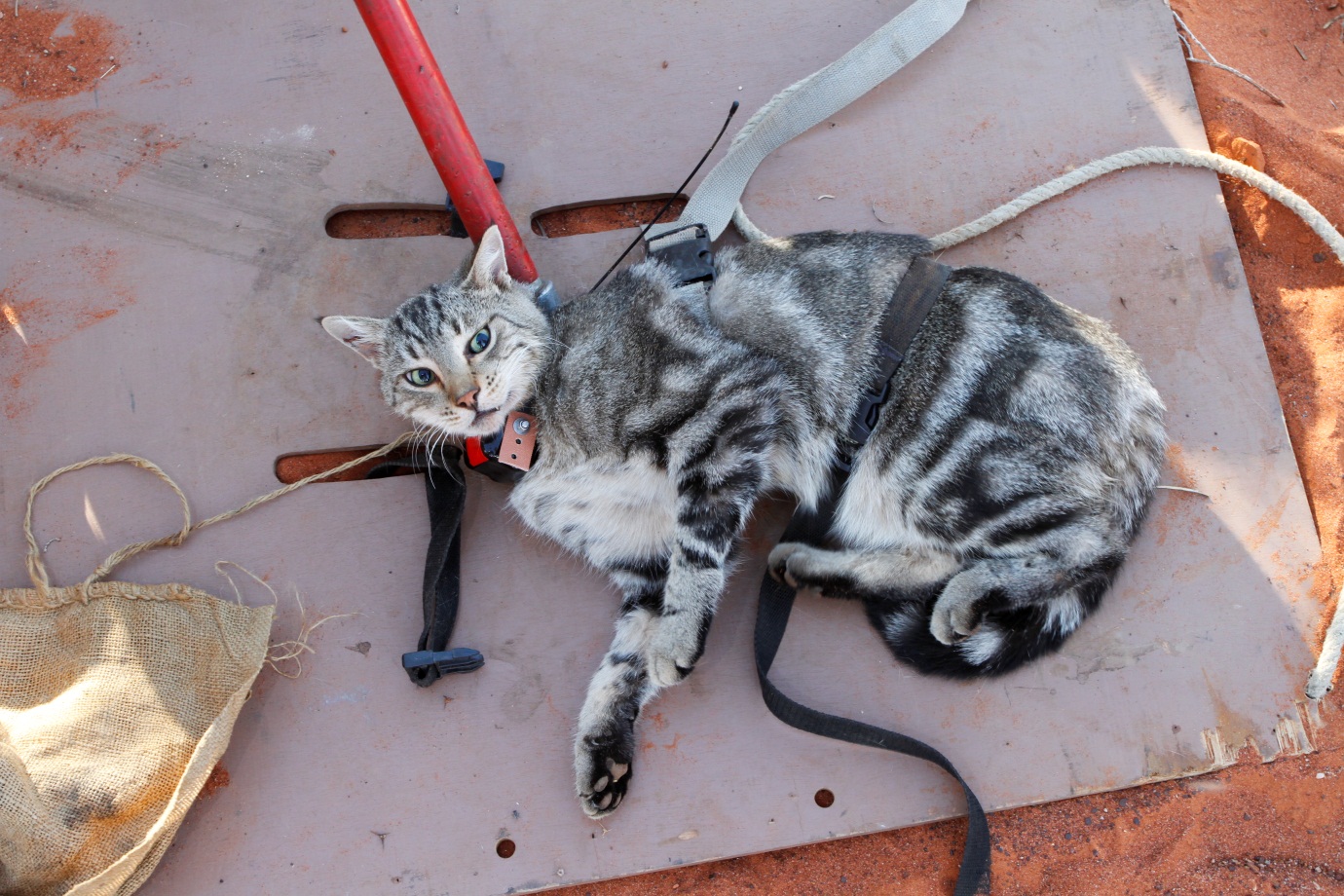 Meanwhile, back in the area around Main Camp, Tom had been setting soft-jaw traps for cats and foxes. Cats were in particularly high numbers, with several being trapped, observed during the day and on spotlighting runs, and many prints being spotted on roads and grids. With something like 18 traps set every night, and a variety of scents and lures, it was not long before enough animals were captured for the four GPS collars to be deployed. Two small collars were put on cats, while one of the larger collars was deployed on a large cat and the other on the single fox captured on the trip. Tom also attempted to pick up radio signals from the collars already deployed on previous trips, but it was all silent on the airwaves despite the large distances covered. Testing the collars indicated that they sent out reasonably good signals, even ‘through’ a few dunes. One of the cats collared on this trip was tracked and sighted, looking fine with its collar still in place.

The first session of trapping from main camp consisted of grids 1, 2, 4, 10 and 11, as well as the South Site and Way site grids (SS 3 and 4 and WS 1 and 2). A clear picture was already emerging that would prove to be consistent across all the areas trapped: animal numbers were extremely low, particularly rodents. A few dasyurids and a smattering of reptiles were more or less all that was being trapped. Birds showed a similar pattern – very few individuals of even the usually common species were around and about, and after the last few ‘good years’ it was quite strange not to hear crested bellbirds and chiming wedgebills in the early morning. 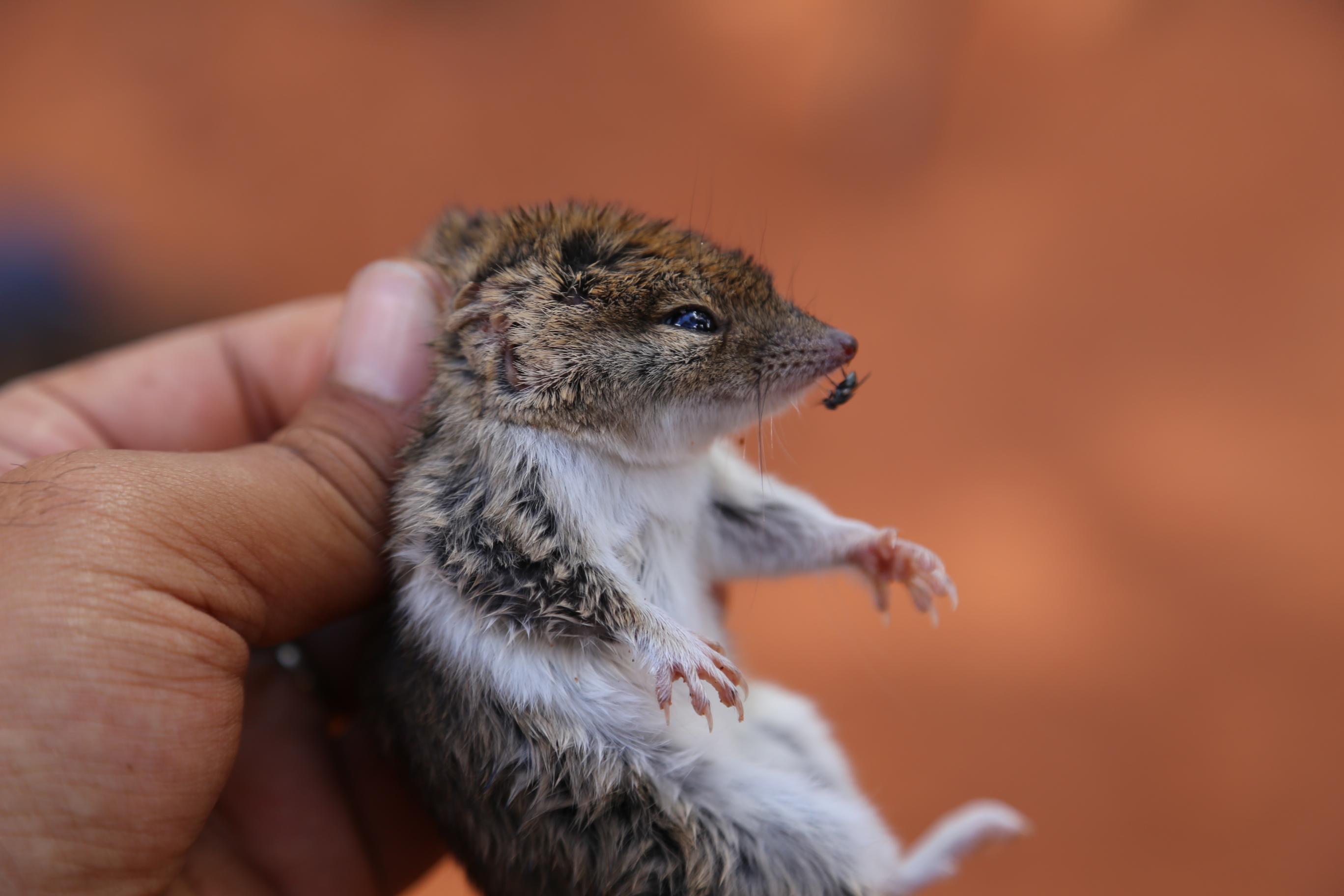 The next departure from Main Camp was Dave Nelson’s crew on the ninth: Steph, Jim, Christina and Valentina. This team headed to Kunnamuka swamp and trapped the east and west grids here (KSE 2 and 3 and KSW 1 and 2), then drove out into the Northern Territory property of Tobermorey, and trapped the east and west grids (TBE 1 and 2, TBW 3 and 4) whilst camping amongst the beautiful gidgees.

These grids on Tobermorey had been burned about a year ago and were showing a little recovery in the form of plenty of small spinifex, Aristida and regenerating Nutbushes (Stylobasium spathulatum). The two eastern grids were fully repaired, whilst the western grids remain unfenced. Luckily, three species of goanna were trapped – the tiny Short-tailed goanna (Varanus brevicauda), the slender Desert goanna (Varanus eremius), and a young Sand Goanna (Varanus gouldii).

While this was going on, the remainder of the team at Main camp (Glenda, Bobby, Roberto, Tristan, James, Jessica, Francine, Gal, Martin and the “Bobsy Twins” Deb and Elyce) were trapping the grids at Shitty Site (SH 4 and 5). Glenda supervised plant plot surveys (the “Boom and Bust” long term vegetation surveys) around the area while also scouting for spots suitable for the establishment of two NutNet sites. In the end, one area at South Site (unburnt) and one north of Main camp (burnt in the summer 2012-13) were chosen, and the marking-out began. A site is specified as consisting of 30 individual 5x5m plots, with six of these plots being fenced to exclude large herbivores with star pickets, three strands of wire, and wire netting. Though one fence was built early on as a test run, the bulk of the NutNet fence building, nutrient dispensing and data gathering was to be completed in the last three days of the trip. For more information on the Nutnet project aims, status and protocols, see http://www.nutnet.umn.edu/. 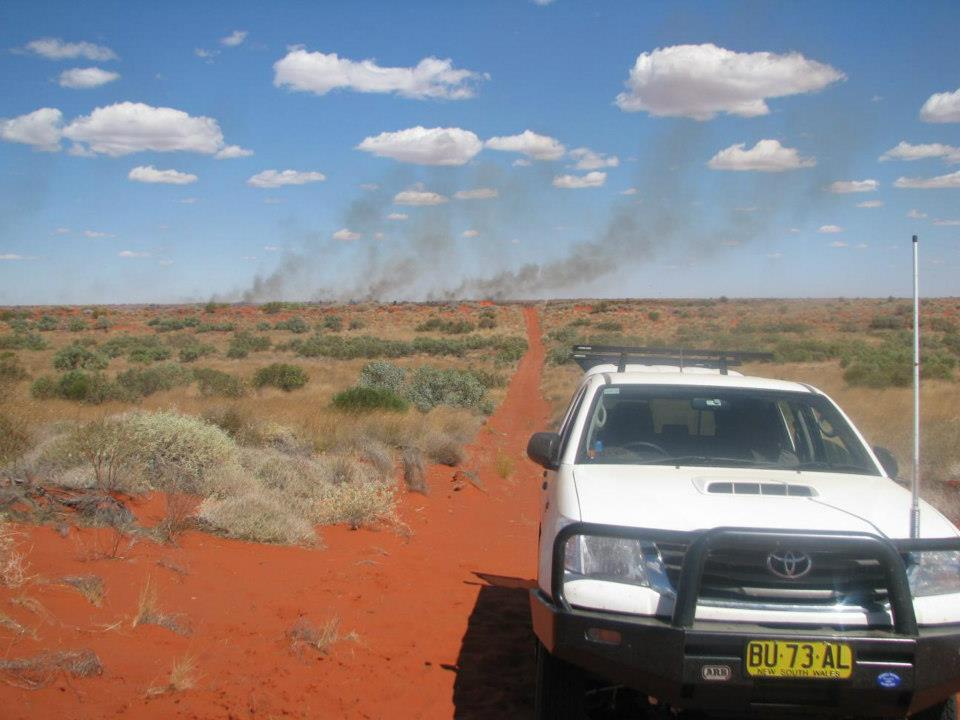 A dramatic sequence of events began at Shitty Site when a piece of burning toilet paper was blown out of a hole and into a large clump of Aristida. This ‘kerosene grass’ burns with surprising ferocity and, stoked by the gusty wind, the fire was soon out of control. In about two hours from its inception at grid 5, the fire burned north to grid 4, crossing the road then burning itself out before reaching Middle road and Oil bore. The fire seemed easily stopped when there was no wind, but impossible to fight when the wind whipped it up and carried it across substantial distances. The final area burnt was about 2km long and mainly contained within one swale, although it did jump a dune crest at one point. 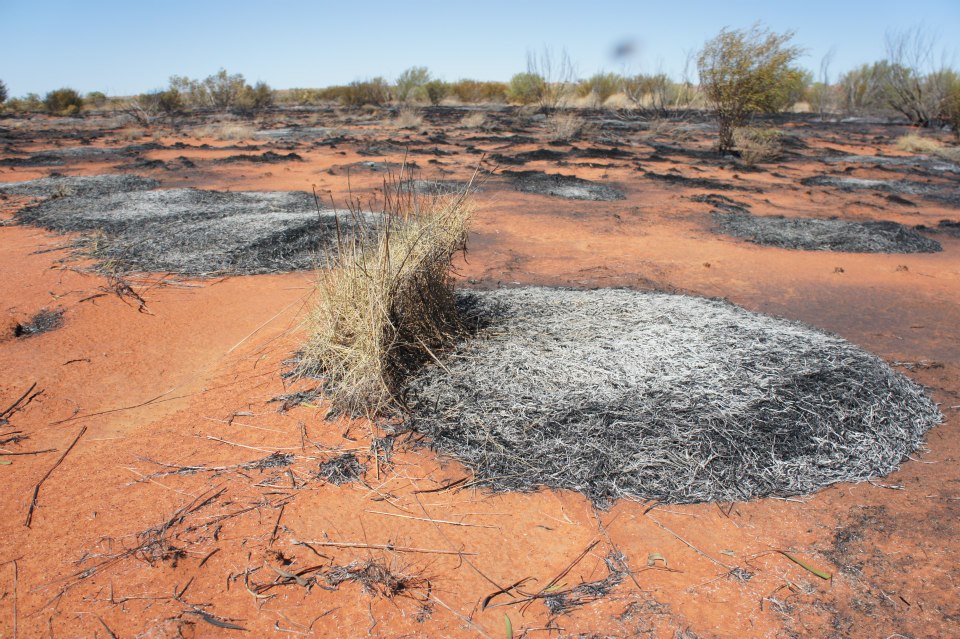 The other surprise regarding fire happened after Glenda, Bobby, Tom and their crews pulled up stakes from Main Camp and relocated to Field River. the crew remaining at Main Camp to Field River. The country to the north of the camp was discovered to be recently and fiercely burnt, including the normally leafy main channel of the river. In order to ascertain the extent of this burn, the crew drove north in convoy along the river, meeting up for a picnic and catch-up with Dave and co. who had driven south from Tobermorey. It was a striking landscape to see, torched and blackened, with many fallen limbs and dead trees, and just a few splashes of green where trees were beginning to regenerate from their bases. We measured this burnt section at about 20 km long, and it crossed at least a couple of dunes to the east, and extended a variable distance to the west: sometimes as far as the eye could see, at other times not crossing the road.

The road to Field River was generally good but softer than before the fires. Trapping and Boom and Bust surveys were completed at Field River South and North (FRS and FRN). The highlights around camp were the renovation of the humpy shelter led by Tom and the installation of a spa led by Martin. Tom enjoyed some bumpy rides listening for signals from the predator collars but all was quiet on the western front. Bobby headed out for the usual moonlighting work of driving the spotlight surveys. All seemed to have enjoyed the experience and more cats and foxes were spotted than usual. 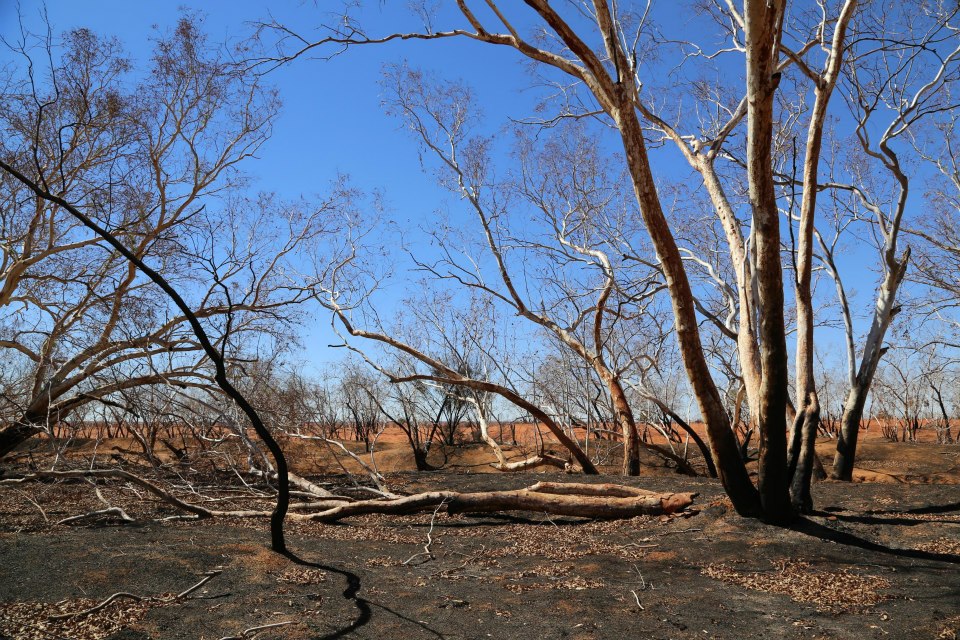 Other work carried out at the Field River included taking samples from several mallees – including digging up the below-ground lignotubers led by Rob (see section B). Ongoing Codonocarpus work was also completed; some of the latter had survived fires and were regenerating from the base of the plant. The grids trapped at Field River were FRS 2 and 3, and FRN 1 and 2.

With everything completed at Tobermorey, Dave’s crew was the first to travel back to Main Camp. While the other groups had enjoyed delicious water gushing forth freely from bores, scrubbing in showers and soaking in baths, this team had been on strictly limited water for their time away. On occasion, the reward for such grimy workers is a trip to swim at Pulchera waterhole, one of the jewels in the crown of Ethabuka. This was not to be; the team arrived to discover the waterhole was bone dry, cracked mud lining the spot where hundreds, thousands of waterbirds were flocking only months before. It was still a pleasant spot for afternoon tea, though the group had to make do with a quick wash from the tanks at Ethabuka homestead. 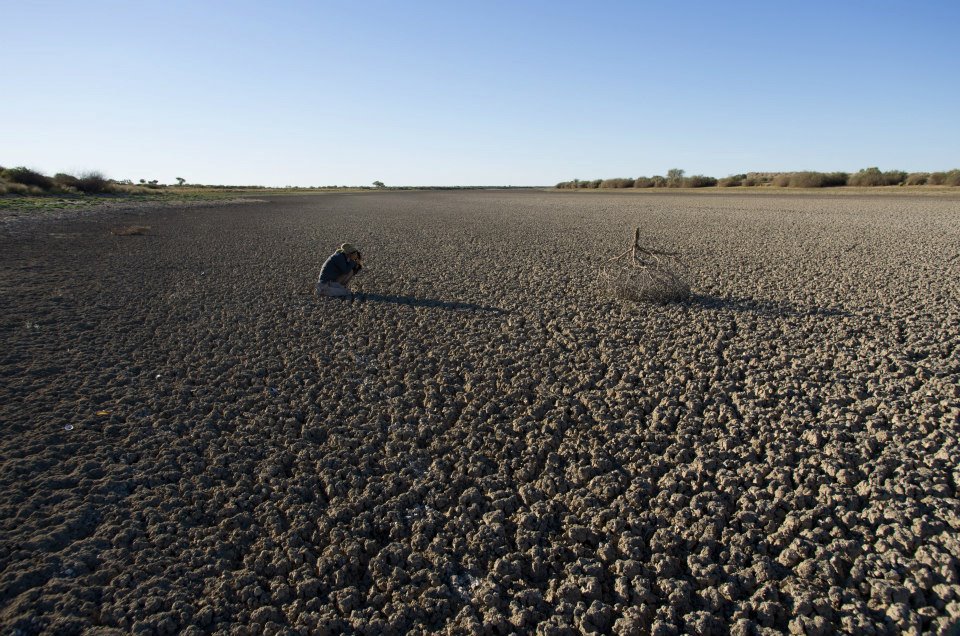 With the Field River contingent back at Main Camp, the bulk of the work that remained was the NutNet fencing, nutrient distribution and data collection. The fencing crew acted as a well-oiled machine with four teams acting in concert: the picket driving team putting in the structural components to be followed up by the wire team, expert in the use of the mystical gripple tool, the netting crew – gate guys and clipper girls – and finally the wiring team making sure everything would stay put. Specialisation and coordination paid off, and the two sets of fences were erected by lunch time on the second day. The end result was certainly a sight to see. Lastly, data had to be gathered, nutrients had to be dispensed in exact quantities, soil cores taken and vegetation collected, all according to the NutNet protocols. These sites will now be sampled annually.

Other work worth mentioning included the mapping of the recent fire at Main Camp North, the introduction of new Reconyx cameras to replace the older models, scat searches and collections, downloading and checking all the weather stations and the collecting of seeds for the reference collection.

As usual, the showers at Bedourie were well used and some fresh food enjoyed before the group left the red sand and the star-bejewelled sky behind to travel back to their normal lives. 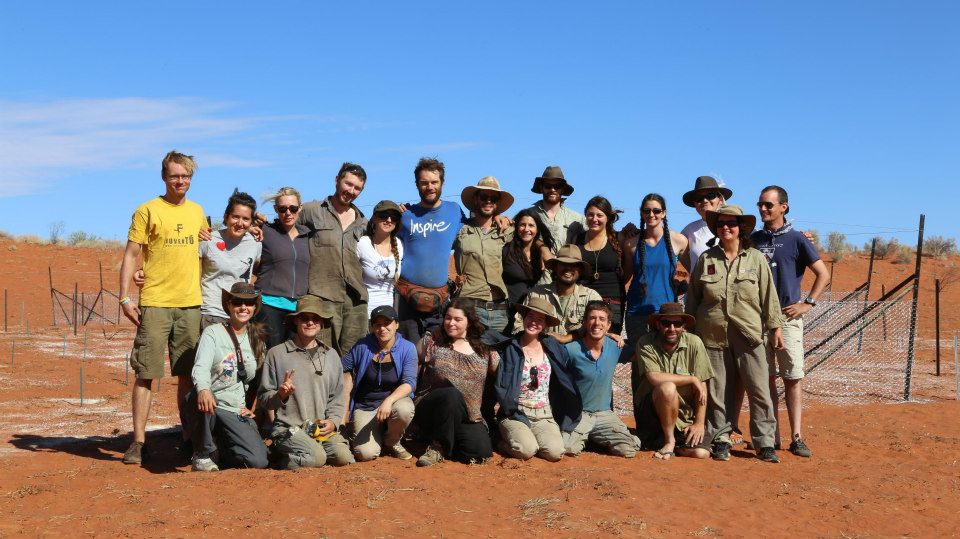