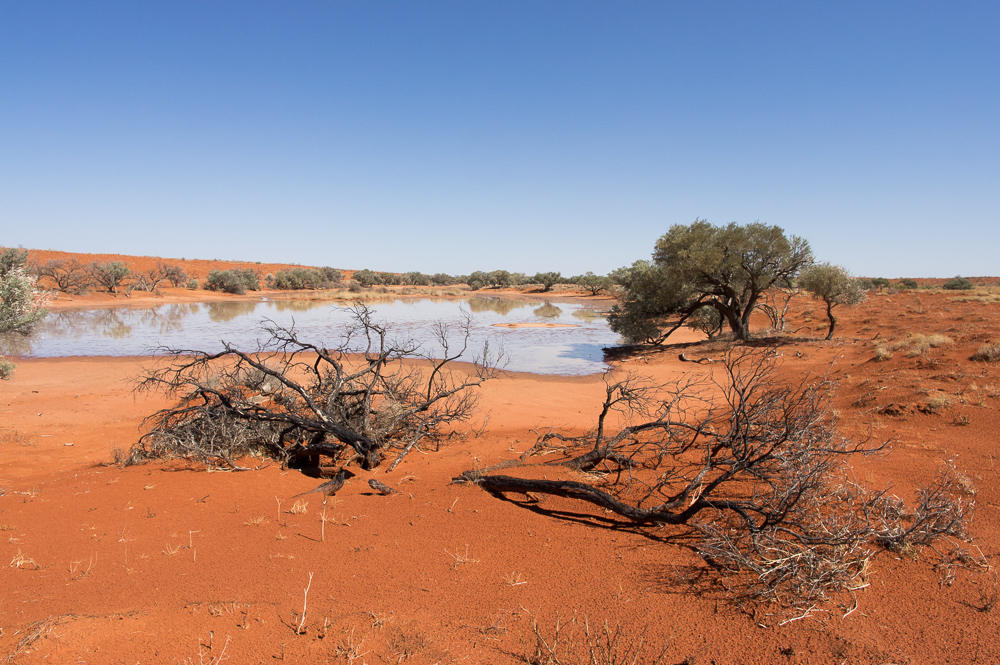 A claypan holds a film of water after rain. Photo: David Nelson

As we got out of the air-conditioned vehicles for a break on the drive through the channel country, we exchanged nervous glances as we felt just how incredibly hot the wind blowing into our faces felt. To either the first time volunteers or seasoned desert veterans, the heat was a shock. A record-breaking heat wave was punishing western Queensland at the time, with 11 straight days above 40°. What sort of trip had we committed ourselves to? 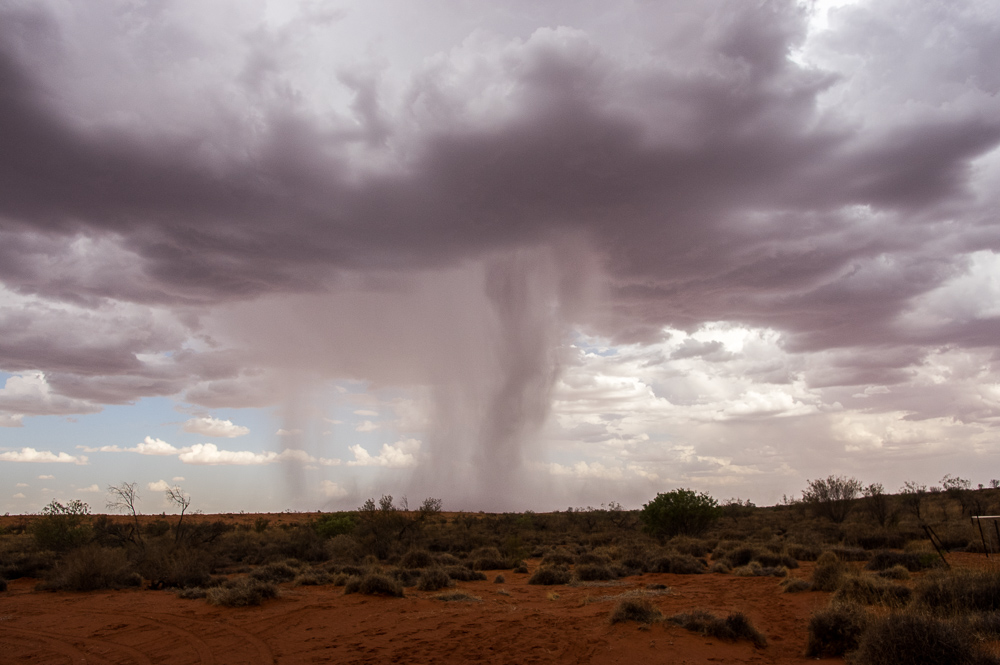 Small rain storms like this one were common in the afternoon. Photo: David Nelson

If you can stand the heat and other discomforts that might arise, summer trips to the Simpson can be particularly rewarding. Reptiles are very active and captures are generally high. Some species, such as certain geckos and large goannas, are only seen on hot trips. We had already seen a big beautiful Yellow-spotted Monitor (Varanus panoptes) just outside Windorah – a species that doesn’t quite make it out to our sites. On the last summer trip back in February however, rain cooled down the landscape and almost trapped us in the desert, forcing us to make a massive detour to Mt Isa in order to escape floodwaters. We couldn’t help but wonder what surprises the weather might have in store for us this time.

As it turned out, we were right to wonder. Soon after arriving at Main Camp on Ethabuka station, the landscape was beset by storms almost every day. Rather than enjoying the warm nights by sleeping under the stars unencumbered by covers, we more-often-than-not had to take shelter in sweaty tents which the wind did its best to dismantle. We even had to take shelter in the caravan a couple of times in the evening, as the rain fell, gusty wind blew and lightning struck around us. 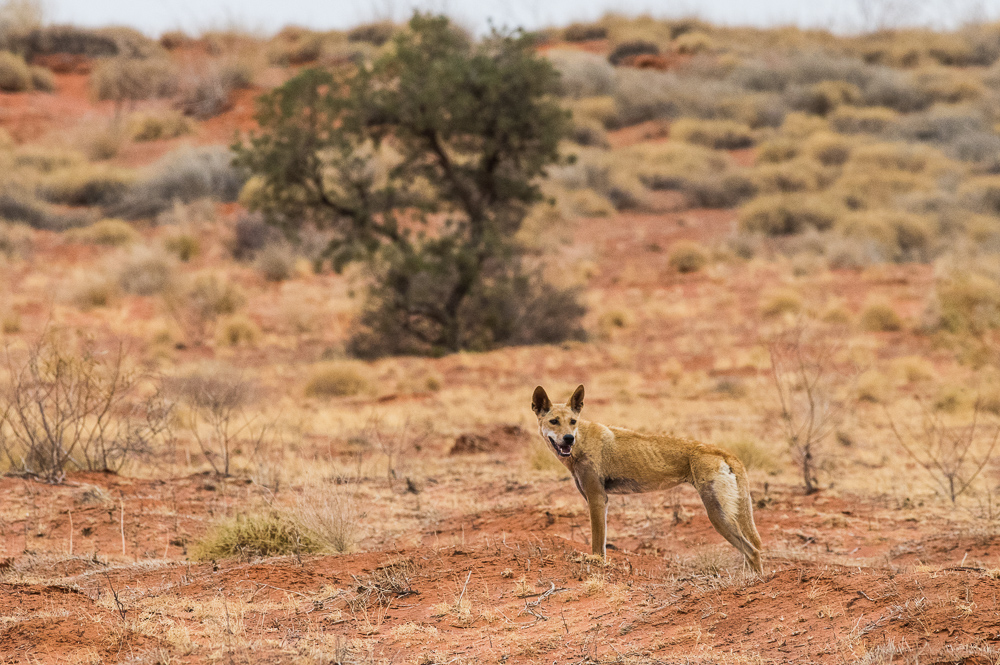 Mornings were hot and humid as the sun dried off the sand, the water vapour then rising to form bulging cumulus clouds which darkened progressively through the afternoon. In the evening, storms would surround us at all points of the compass, and it was anyone’s guess what we would actually get – rain, wind, sand, lightning or any combination of these. As far as comfort was concerned, this trip was not going to win any contests.

As we approached camp, a dingo met us on the track. It was skinny from the lean times out in the desert recently, but seemed healthy. Dingos are around all the time out there (as their tracks and appearances on remote cameras indicate), but are seldom seen, so it was nice to get a good look at this top predator. 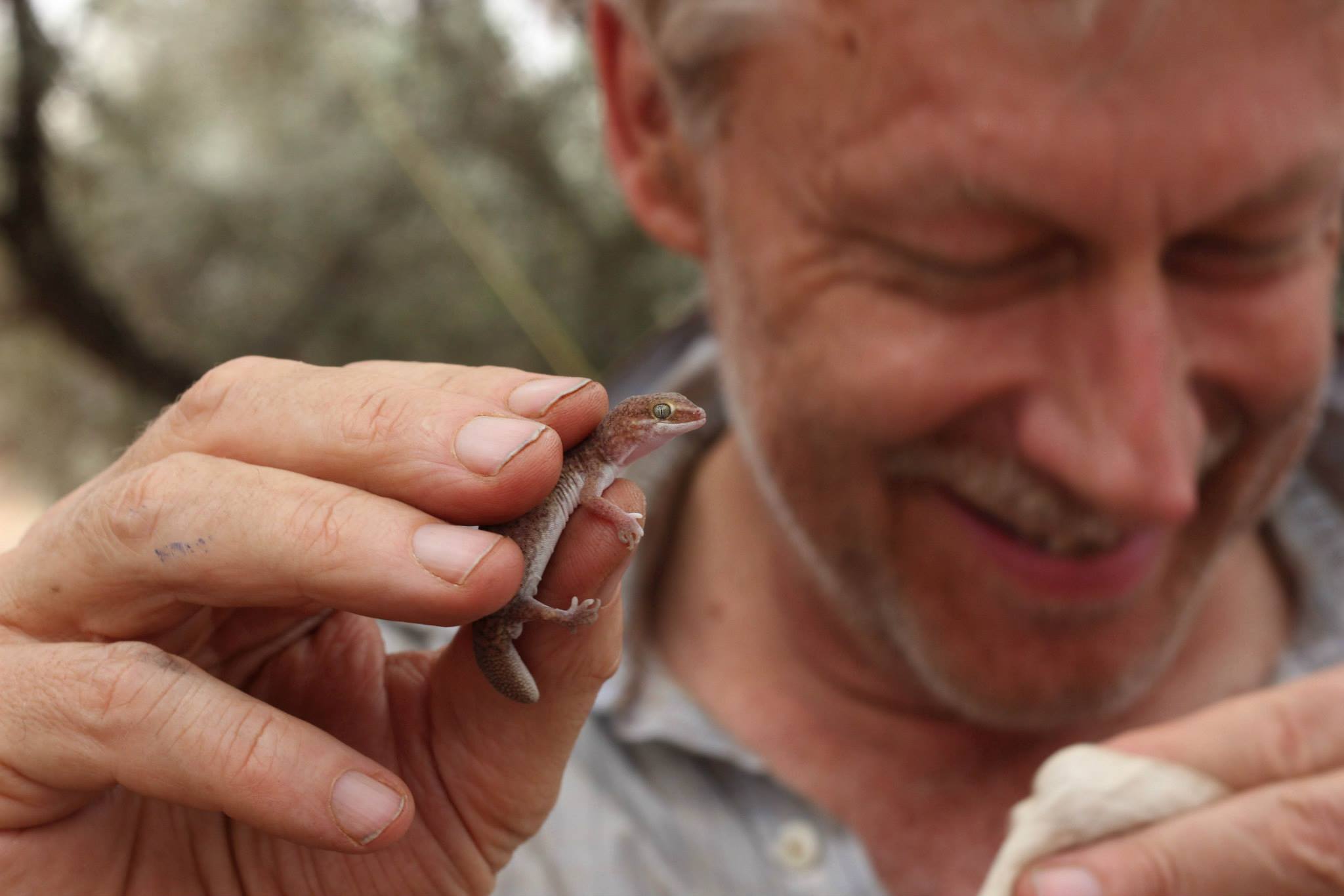 There were two main aspects to the work we had planned for the trip. We were continuing the shelter tunnel experiment with trapping and ‘giving up density’ trials on twelve grids around Main Camp, and Eveline was conducting behavioural and eco-physiological studies on the dragons in the area.

We began our trapping schedule by opening six grids then started the daily ritual of checking traps and processing then releasing the captures. After this initial three-night session we had another two trap sessions, each of three grids. The aim of the current experiment is to see if we can bolster animal populations by providing artificial shelter from predators to recently burnt grids in the form of above-ground tunnels.

On each of the twelve grids we were trapping, we set up ‘giving up density’ (GUD) trials. This type of experiment attempts to examine foraging decisions of animals in the wild. We are interested in how the shelter tunnels we have installed are influencing the safety perceived by small mammals. The basic method is simple – placing bowls of food pieces mixed in with sand in different areas (near tunnels or in the open in our instance) over-night then counting the remaining food pieces in the morning. The rationale is that a foraging animal that feels secure (e.g. due to nearby shelter) will continue to remove food pieces from the sand despite diminishing returns, whereas a fearful animal is likely to abandon the resource sooner. We used pieces of cashew nut as food for the rodents, and mealworms for the dasyurids (hopefully!), and found that the rate of takes was quite good. 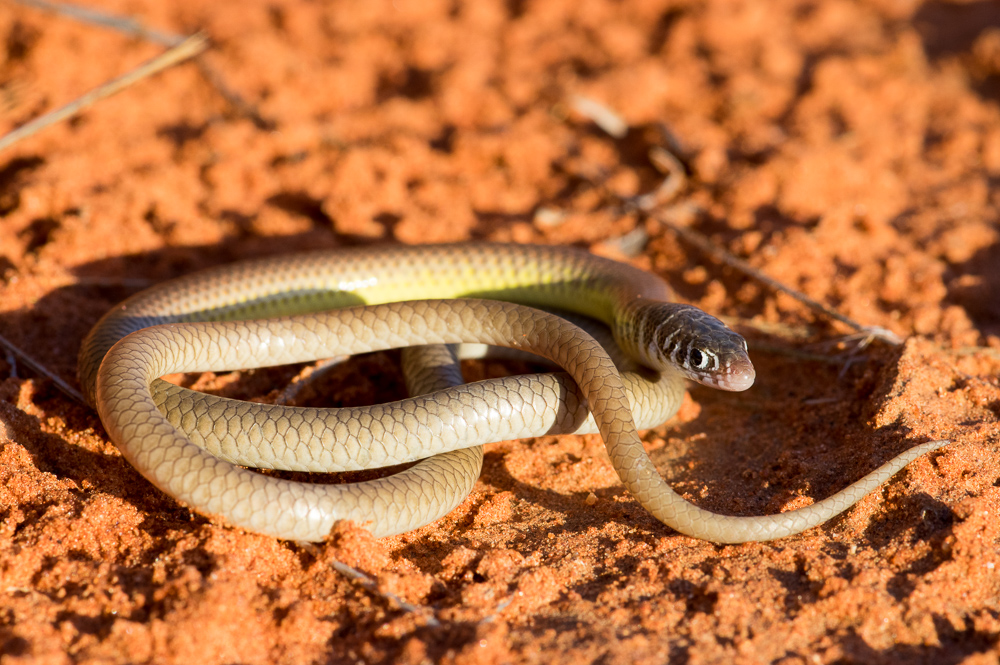 Trapping success also turned out to be quite good. We had plenty of geckos – largely Beaked Geckos (Rhynchoedura eyrensis) and Sandplain Geckos (Lucasium stenodactylum), also including the Knob-Tailed Gecko, Nephrurus levis. Fat-Tailed Geckos (Diplodactylus conspicillatus) were also common at certain grids – one of those species that only turns up on summer trips. We saw a couple of Legless Lizards (Delma nasuta, the Nosy Delma, and Lialis burtonis, Burton’s Legless Lizard). Another fairly rare capture turned up in traps several times, the Short-Tailed Goanna, Varanus brevicauda, the tiny relative of the Sand Goanna (Varanus gouldii; a couple of which also managed to get themselves stuck in the pitfalls). 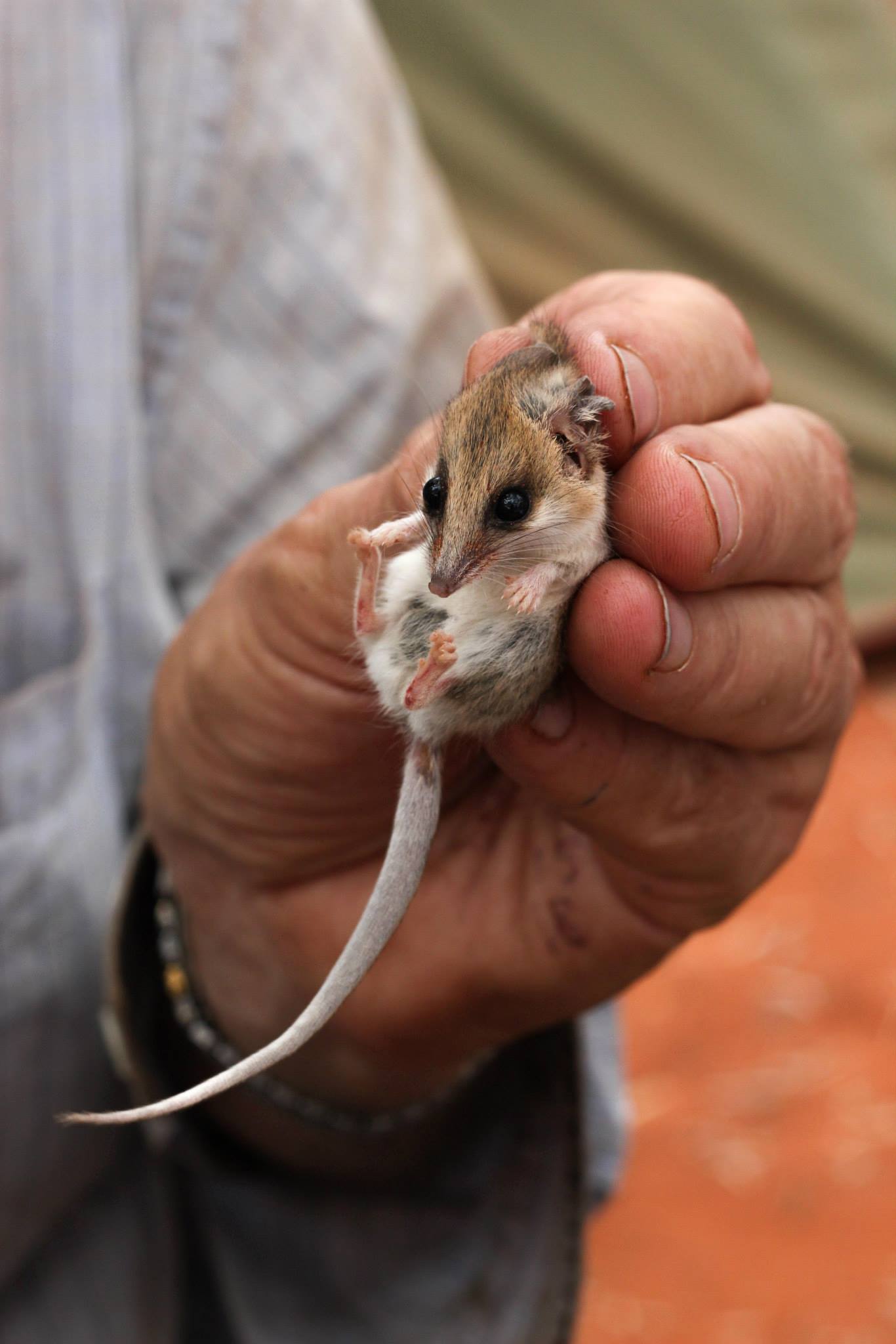 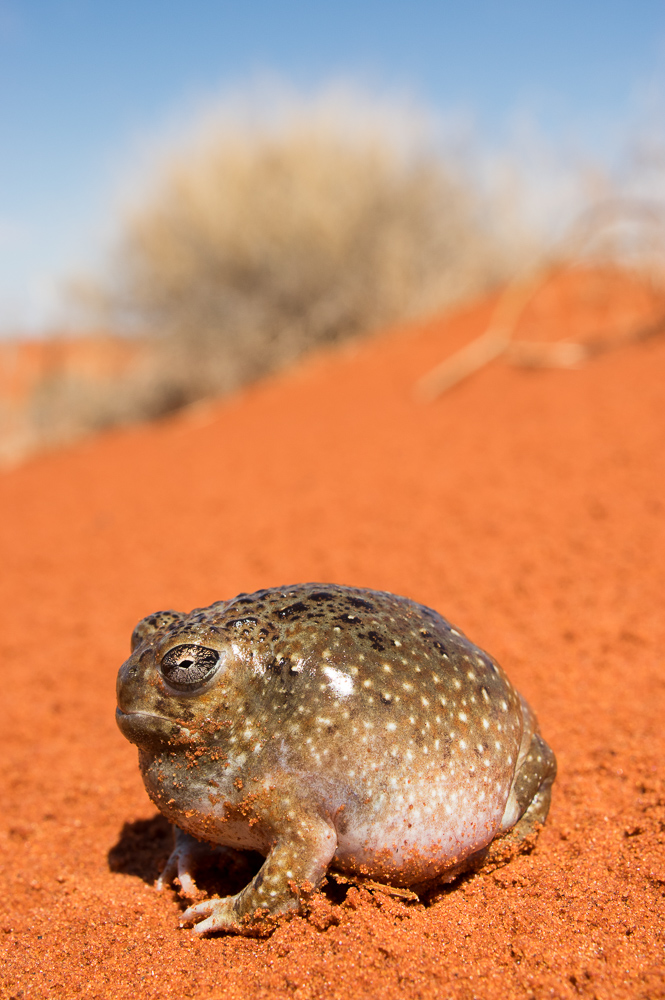 The most remarkable creatures to show up in the traps were undoubtedly the frogs. Emerging after rain soaks the desert sand, we had two species – the most common being the Desert Spadefoot, Notaden nichollsi. This species burrows in the soft dune-top sand but apparently makes significant excursions to forage – we saw its prints down at the base of the dunes in the morning. The other species, which we only got a couple of, is the Trilling Frog, Neobatrachus sudellae, which seems to burrow more in the swales or claypans. Both frogs are very round in shape, with short, ineffectual-looking legs. Both species also store a large quantity of water for the dry times. 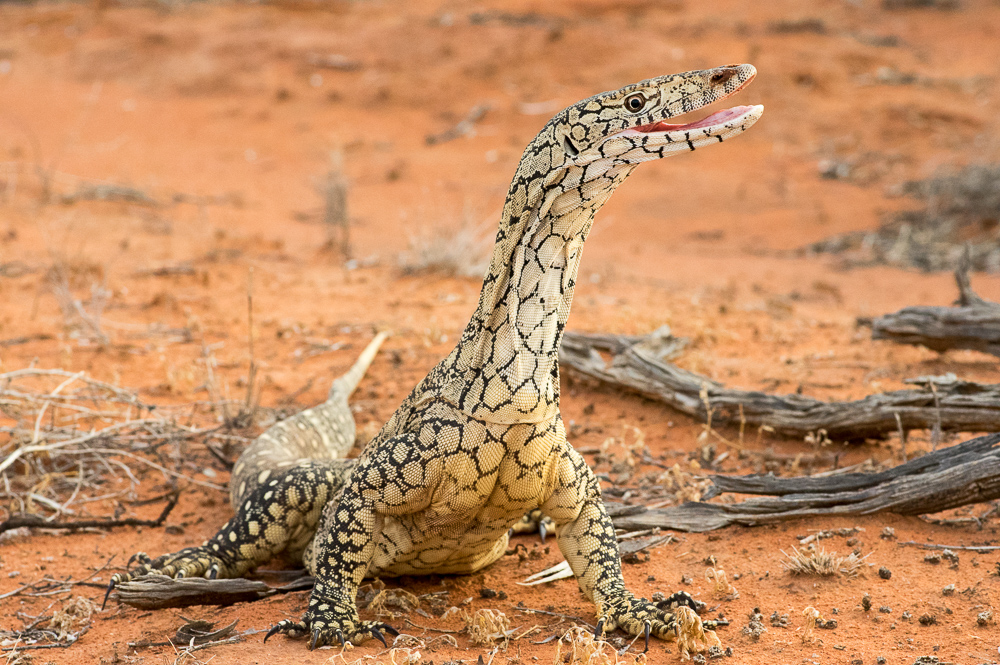 One of the trip highlights happened just south of camp when Jess spotted something on the road ahead. Something big. It was a Perentie (Varanus giganteus), Australia’s largest goanna. This one was a pretty good size at an estimated 1.6 m long. Approaching it cautiously so as not to startle it, we were able to get quite close for photos and observations. The big lizard alternated between continuing to roam around unconcerned, flattening itself to the ground and standing tall with its head up high. The dirt on its snout indicated it had been doing some digging – probably trying to unearth some prey from their burrows. This is the closest that a Perentie has been seen to Main Camp in the 25 years of the study! 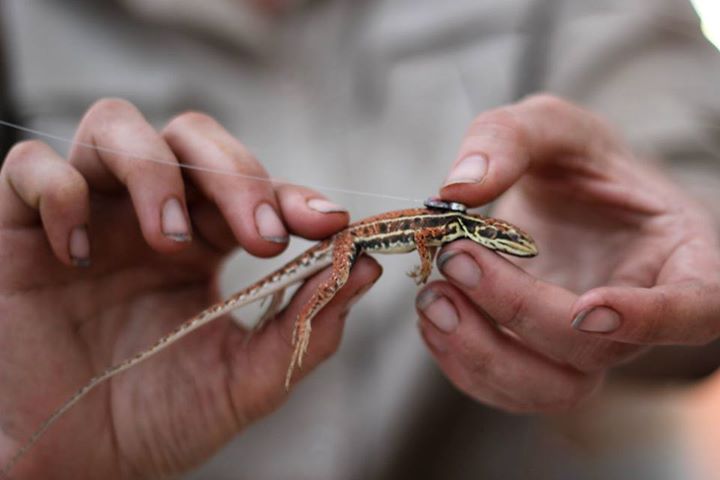 This trip we focused on the Military dragon, Ctenophorus isolepis, and deviated from the usual predation related work. Using temperature sensitive radio transmitters we set out to assess their thermoregulatory capacity and activity patterns. When the temperature rises, the transmitter beep frequency rises too, giving an indication of the temperature of the animal. Correlating this temperature to the temperatures being recorded by the 70 IButtons we spread around different microhabitats at the time of the experiment, we can work out where individuals are and whether they are active or not.

The experiment was modelled on current work that Dr Lisa Doucette from the University of Canberra is doing on earless dragons. She very kindly agreed to lend us her receivers to make this experiment possible. We set up two sites, captured 16 dragons, glued on the radio transmitters and after ironing out a few glitches in the system the data started rolling in. We threw in some visual observations for good measure, to verify the collected radio tag data. We ended up collecting close to 300,000 data points over 10 days, a record so far for this project. 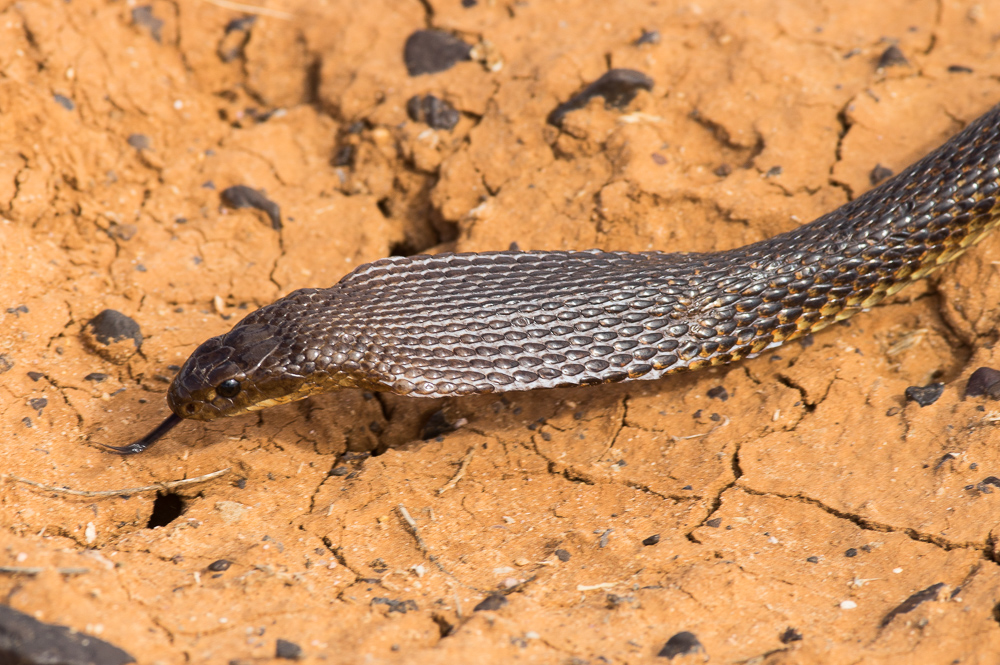 We left the desert with a little apprehension about the road conditions. We hadn’t heard of any relevant closures, and we were assured by the Bedourie policeman that the section from Bedourie to Windorah was a bit wet but passable, but we were worried about the 120 km stretch of dirt road before Bedourie. We’d seen some significant rain falls apparently in that direction, but there was no way of telling how much, if any, had actually fallen on the road. Chris had also told us that there were some wet areas when he’d driven out. 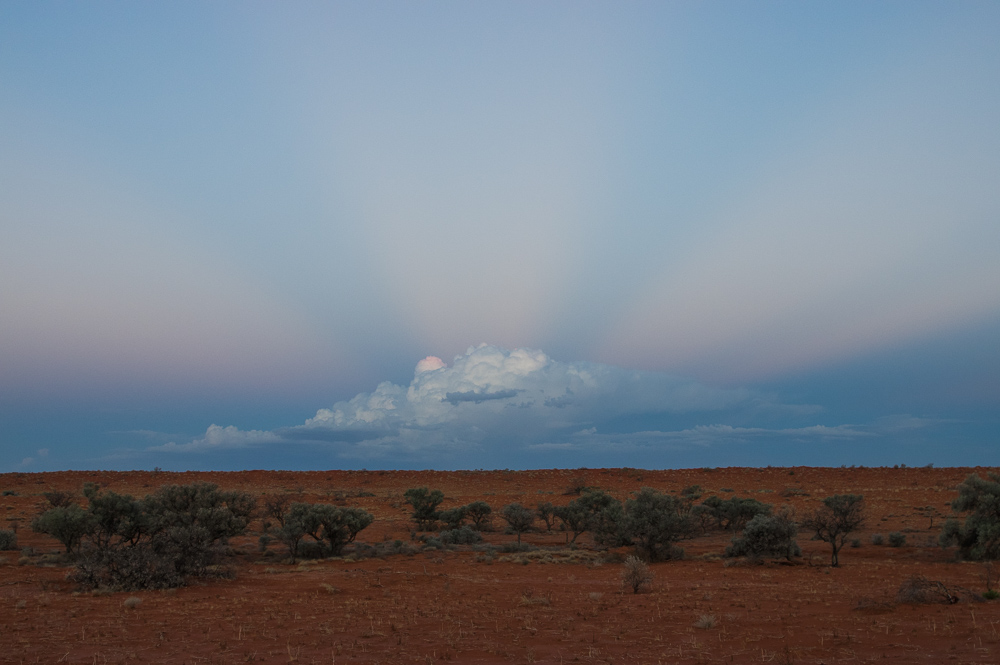 As it turned out, there was no need to worry. The rain must have mostly missed the track and all was fine, and coming in to Windorah on the evening of our departure we were treated to a beautiful western-Queensland sunset. Another highlight from the road was a snake spotted just outside Bedourie in the cracking-clay. While we couldn’t identify it at the time, the photos revealed it to be an Ingram’s Brown Snake (Pseudonaja ingrami).