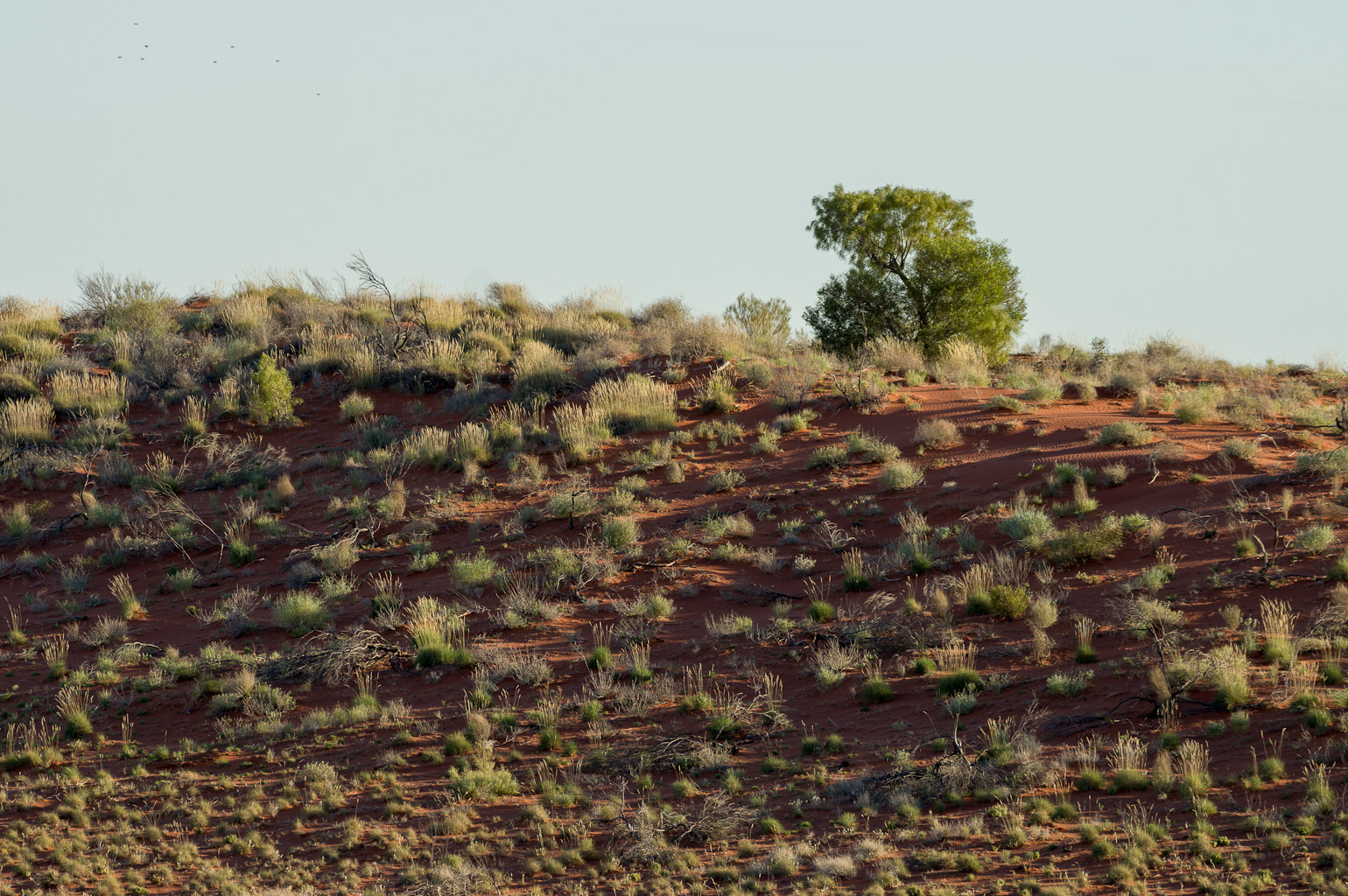 With a couple of good rainfall events in western Queensland over December and January, we headed out to the desert in mid-February with high hopes for the trip. Evidence of the rain was everywhere – some of the roads on our route had only opened up about a week before we departed, and some roads in the region were still closed due to flooding. The Cooper Creek at Windorah was flowing. We encountered grasshopper swarms here and there, and Australian Pratincoles dotted the roadsides in large numbers. We even saw a couple of frogs. But had our study sites received any rain?

As we drove on to Ethabuka and our Main Camp, it was immediately evident that they had. The most obvious sign was the spinifex seed heads– the first that had been produced in a couple of years. There was also a reasonable amount of annual grass growth, such as Kerosene grass (Aristida sp.) and Button grass (Dactyloctaenum radulans). Most of these annual grasses had done their dash already, having grown quickly with the abundant sunshine and warm temperatures, seeded, and browned off. 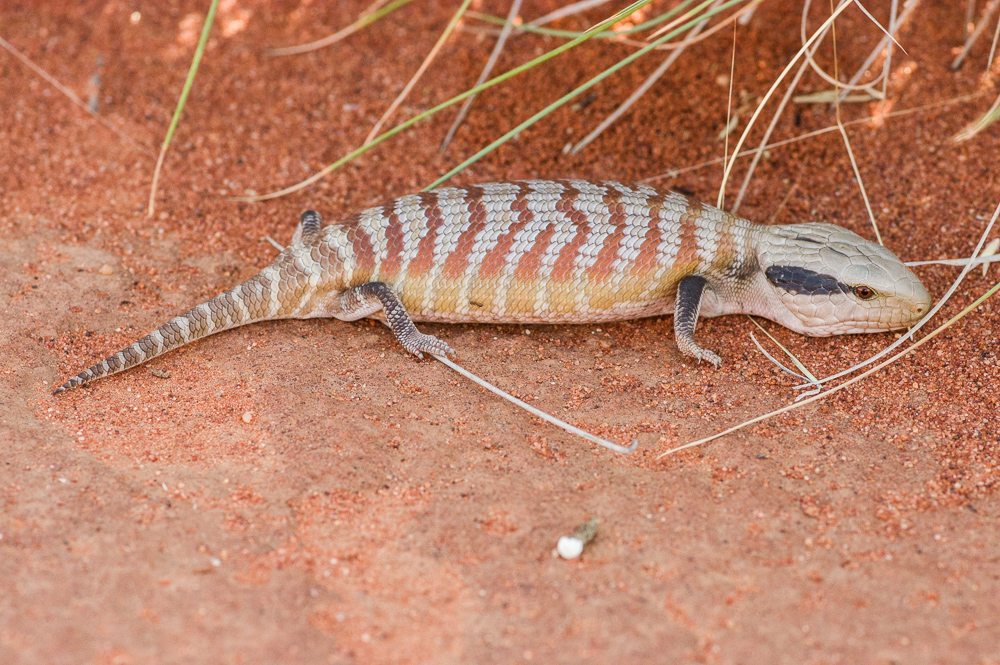 Spinifex can sometimes produce empty seed heads, but we found that on this occasion they actually contained a reasonable amount of seed. Even the young spinifex in the burnt areas – just three years old – produced some. Grass seed is an important food source for many animals in the desert, so this event may boost some populations.

Our weather stations showed that something like 65 mm of rain fell between late December and mid-January. This is by no means a huge amount, but it’s certainly something.

The other thing that the weather stations recorded was the temperature. We experienced a consistently very hot trip. The maximum temperature was over 40 every day. We had temperatures creeping over 44 on a couple of days. Night-time often didn’t give us much respite, as it was sometimes still 38 at bed time, and several nights didn’t even drop below 30 at all. And then there were the flies… 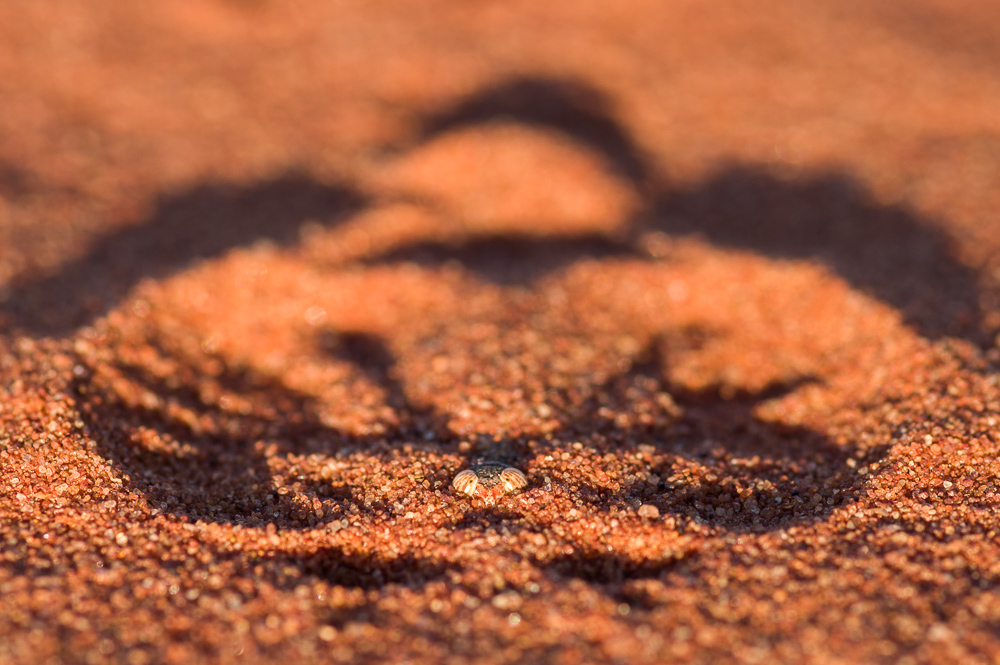 The first order of business of the trip was to catch some dragons from burnt areas for Eveline’s work, which we began by opening our pitfall trapping grids B, D, 0 and 1. We managed to catch a few of one of the target species, the Central Netted Dragon, Ctenophorus nuchalis, in traps, and a couple more by hand to meet our quota. The other species, the Military Dragon, Ctenophorus isolepis, is a bit craftier when it comes to traps, often running straight over the top of the pitfall. We broke out the fishing rods and noosed the necessary number in no time, barely breaking a sweat.

With radio tags attached to these animals, the study was set to begin. We got lots of other animals from the traps too, notably a few Pygmy Short-tailed Monitors (Varanus brevicauda), the Ghost Skink (Eremiascincus phantasmus), and a charming juvenile Centralian Blue-tongued lizard (Tiliqua multifasciata). There were also several hatchling Military and Central Netted Dragons, plus lots of geckos. 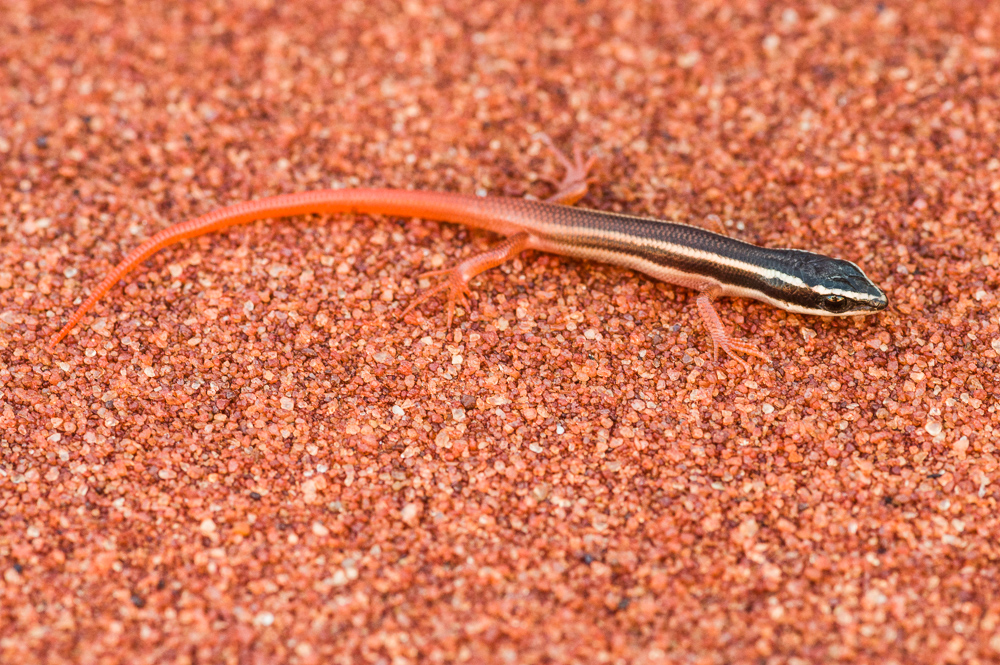 The radio tracking repeated the design that was used in earlier trips, tracking twenty individuals six times a day for eight days. Tracking was started at 6:00, 9:00, 12:00, 15:00, 18:00 and 21:00. The sessions earlier in the day, 6:00 and 9:00 were reasonably easy. Most animals would not have moved far from their last location and temperatures were still agreeable. Later sessions were more of a struggle. The 15:00 session became positively unbearable. The combination of very high temperatures, baking hot sand and highly mobile animals became a very understandable source of apprehension.

Most dragons did not stray far from their original capture location, suggesting individuals had an established territory. The boundaries of the female territories seem less distinct than those of the males. Males were sporting their distinctive yellow and black breeding colouration and it is likely they are defending their bit of red sand against other competitors more strongly.

On the morning of day 4 one of the central netted dragons started to move in very unexpected ways, going much further and into very different habitat than usual. It took a few hours of intense radio tracking until we found the cause: our radio transmitter was not on a dragon anymore but inside a Sand Goanna (Varanus gouldii). Besides the loss of this one and a couple of prematurely shed transmitters all other individuals produced fantastic data on habitat use, territory size, location and general activity. 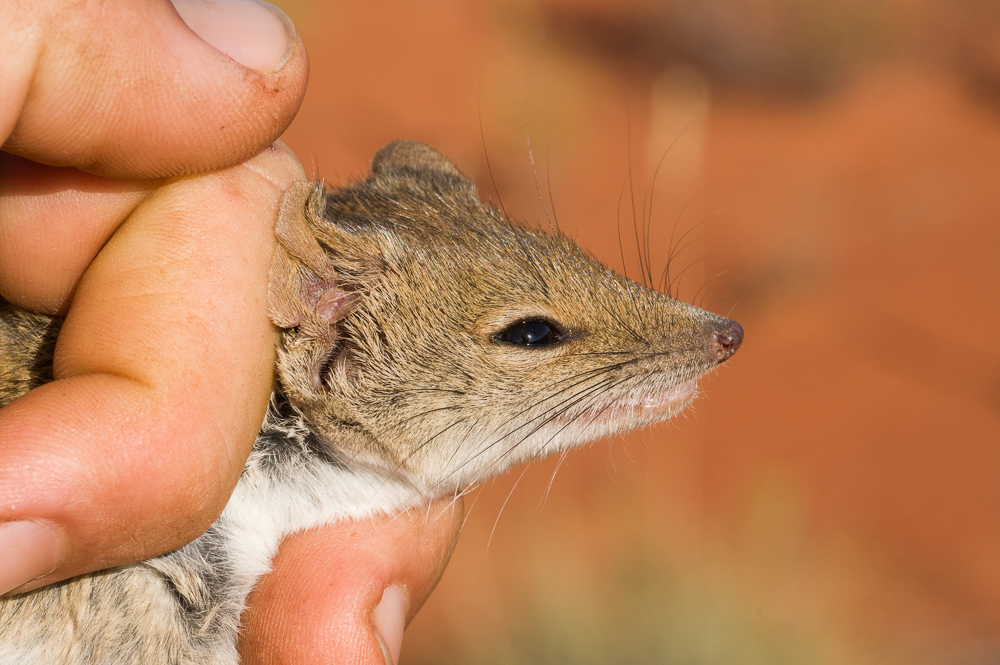 The only other pitfall trapping for the trip was carried out at the Mallee traps. These traps were emplaced in the winter of 2014 (see the June 2014 trip report for details) to look at how mallee might provide habitat for animals in contrast to the surrounding spinifex areas.

Reptile captures were high here too, with a few interesting things turning up. Ctenotus leonhardii is a species that we rarely see, yet we caught two on this trip. A couple of Mulgaras (Dasycercus blythii) were also captured, suggesting that the population is doing well in the area. We know that Mulgaras like areas with mature spinifex, so these captures suggest that the spinifex is finally reaching this stage after being burnt in 2001. Other mammals, however, were pretty low in number. 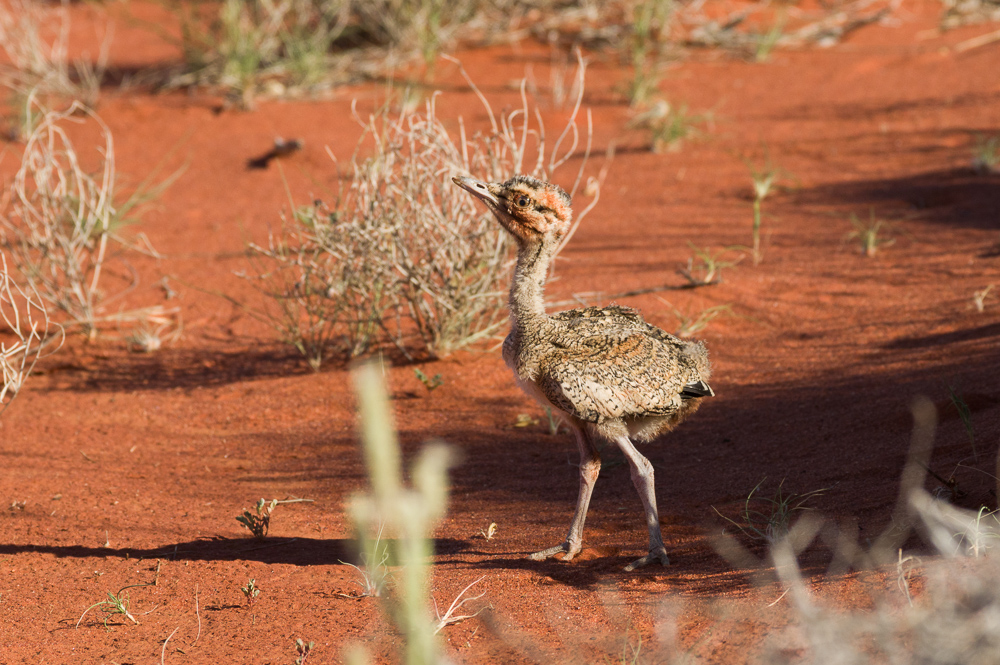 Another highlight was seeing a mother bustard with two chicks – very cute balls of feathery fluff that still tried to look as haughty as the adults of the species.

While we were sitting in the shade at camp one afternoon, the sound of wingbeats announced the arrival of a single female Flock Bronzewing. She walked around for a minute or two before finding some shade in which to sit and rest. Later in the afternoon she was looking a little weak, so we offered her water in a bowl. With little hesitation, she jumped in and started gulping down water. 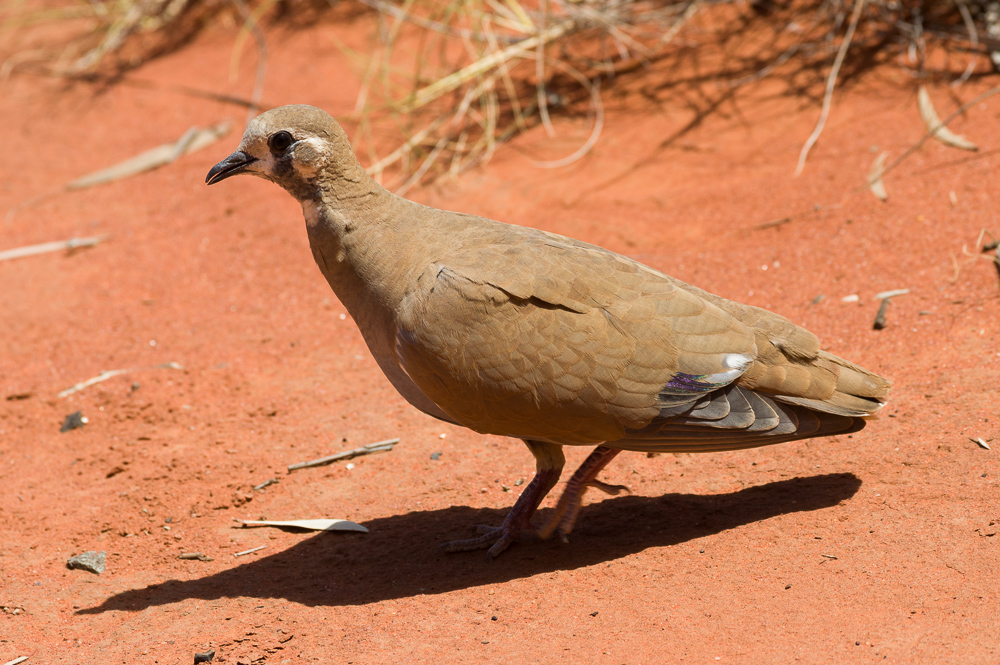 Several other birds were seen at camp visiting the water we provided – endless zebra finches, small flocks of budgies, the occasional cockatiel. Crimson chats, white-winged trillers, diamond doves. A brown goshawk came and had a look around too. A stubble quail hung around for a day. With the high temperatures and recently dry conditions, many animals were struggling. 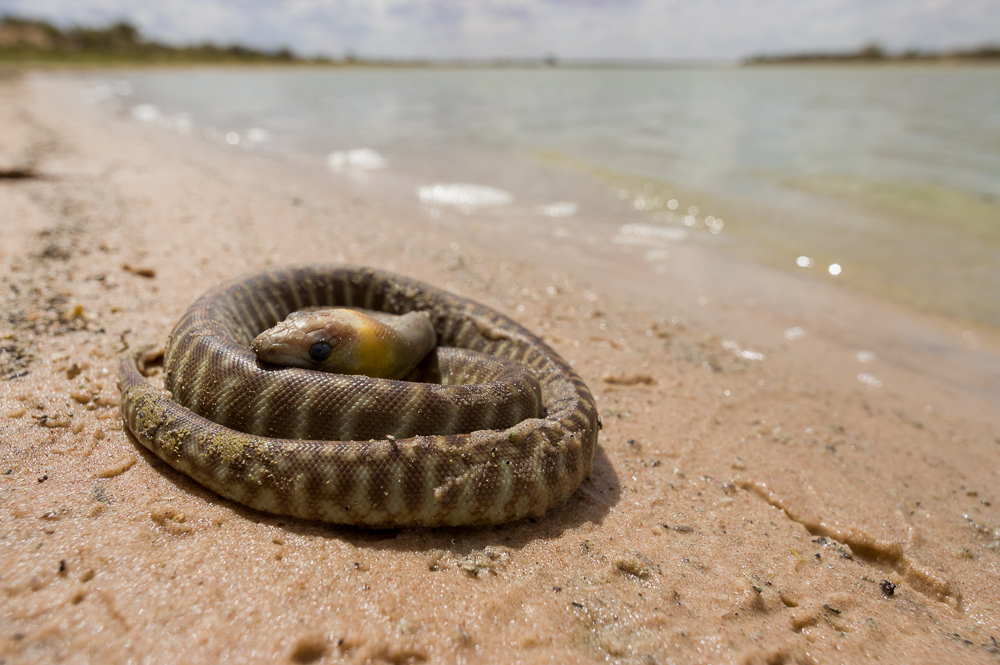 One of the strangest sightings we made was at Pulchera waterhole. We were standing on the shore trying to identify distant waterbirds when one of us happened to look down. At our feet was a small, dead Woma Python (Aspidites ramsayi). This is a very rare species in the area, and there haven’t been any records of the species for several years on Ethabuka. It’s great to know they’re still around – but it was disappointing to find a dead one! We couldn’t really work out what had happened to it – perhaps it had drowned somehow?