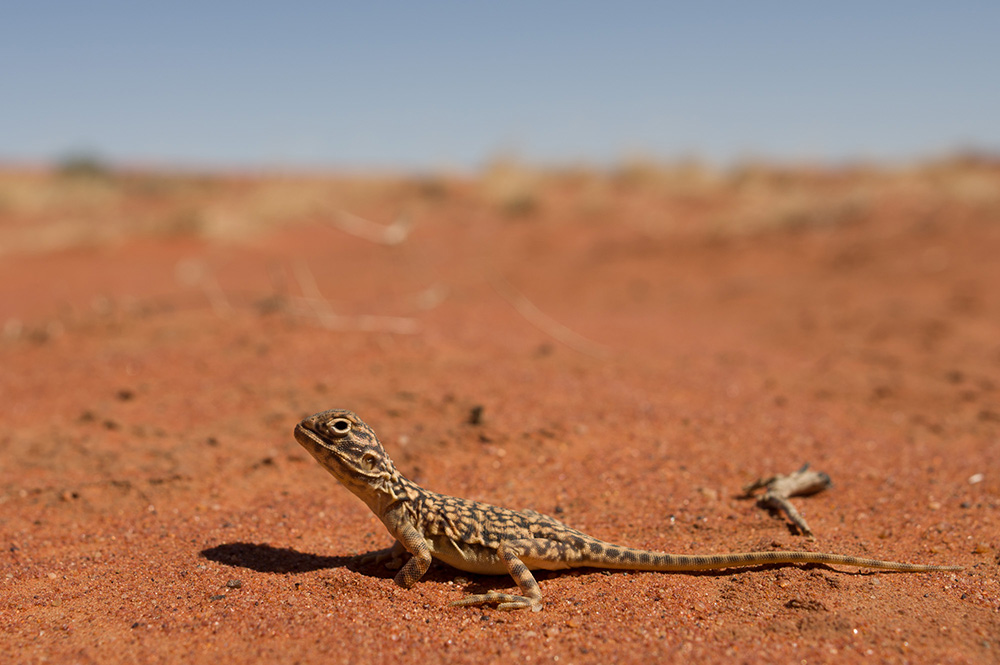 The fourth trip of 2015 began, as always, with a three day drive to Ethabuka Reserve. The drive, though familiar to those of us who make the journey regularly, never ceases to impress, as tall trees and green paddocks give way to the dry, brown outback. As well as our two DERG vehicles, we were accompanied by volunteers Jan and Irene in their own vehicle. The rest of the crew consisted of Chris, Aaron, Dave, PhD candidate Kyla, honours candidate Gab, and our volunteers Nancy, Steve, Claire and David.

September can be a pretty pleasant time in the desert – the edge has come off the sharp cold of the winter, but it hasn’t reached the scorching summer temperatures yet. That’s the theory anyway – we know that there is always the possibility of those ‘outlier’ conditions! The rainfall has been pretty dismal over the year, only about 10 mm falling since July, so for most plants and animals, life is in the low period of the multi-year boom-and-bust cycle.

The weather we experienced was pretty much as expected – though a couple of mornings felt pretty chilly at around 5° C, and a couple of days warmed up to 36° C. Most days were clear and sunny, with scarcely a cloud to be seen for the duration of the trip. We had a few days of strong winds; northerlies that brought the hot weather.

We conducted trapping on 15 grids at Main Camp. This included the ‘tunnel’ experimental grids and the ‘long-term’ monitoring grids. We also conducted our standard GUD experiment on the former 12 grids. 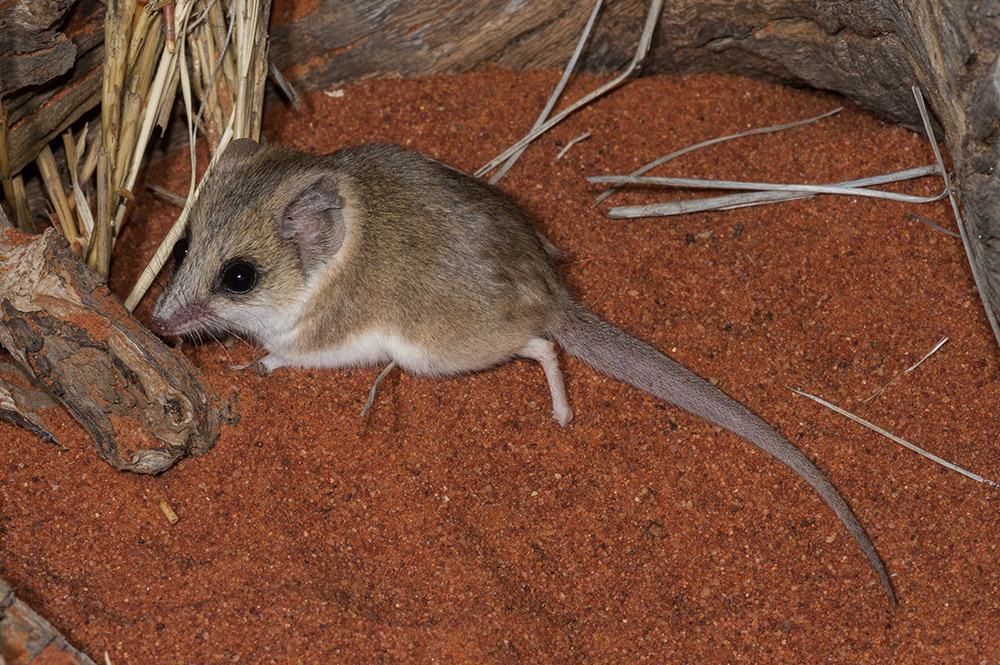 The mammal captures told a mixed story. On the one hand, rodent numbers are fairly low. Sandy Inland Mice (Pseudomys hermannsbergensis) and House Mice (Mus musculus) are present in low numbers, and the Spinifex Hopping Mouse (Notomys alexis) was not captured at all (though one was recorded in a remote camera image!).

On the other hand, the small dasyurids are doing pretty well. Both species of hairy-footed dunnart (Sminthopsis youngsoni and hirtipes) are present in good numbers, with plump tails full of stored fat. A couple even had pouch young. The larger of the two species (S. hirtipes) has made a real come-back around Main Camp – we caught 19 individuals! This is probably due to a preference for recently burnt, open areas.

The other remarkable capture was a mammal so rare it’s only been seen 12 times before in the 26 years of the study. When Chris looked in the calico bag containing the animal he exclaimed “It couldn’t be!” then took another look and added “It is!” The animal in question was a Planigale – a peculiar, tiny dasyurid, adapted for life in narrow soil cracks. This one was Planigale tenuirostris, a tiny little thing at only four grams. 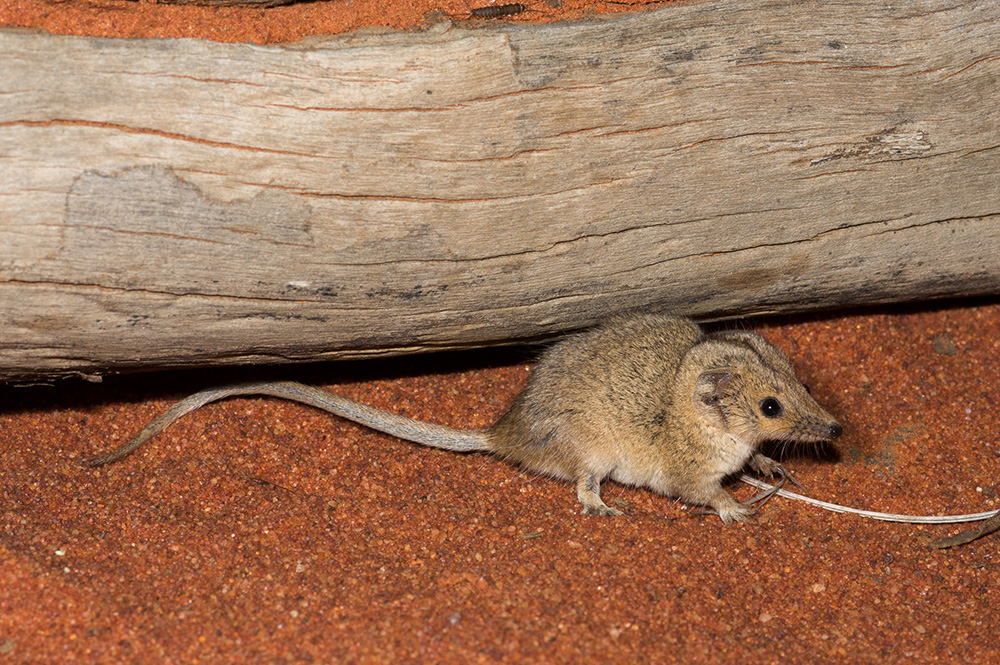 As on previous trips, we conducted ‘Giving Up Density’ (GUD) trials with peanuts and mealworms on the experimental grids. Results were mixed – mealworms were fairly popular but peanuts were barely touched. As usual, birds were sometimes a real problem, hopping from dish to dish to get to the mealworms in the early morning or late evening.

Reptile captures were pretty low, perhaps as a result of cool temperatures. There were still a few nice things turning up, like a big Knob-tailed Gecko (Nephrurus levis).

Aaron spent the best part of four days driving around the properties to download cards and change batteries in our remote cameras – those on roads, at our Ausplots sites, and at Ethabuka Spring. 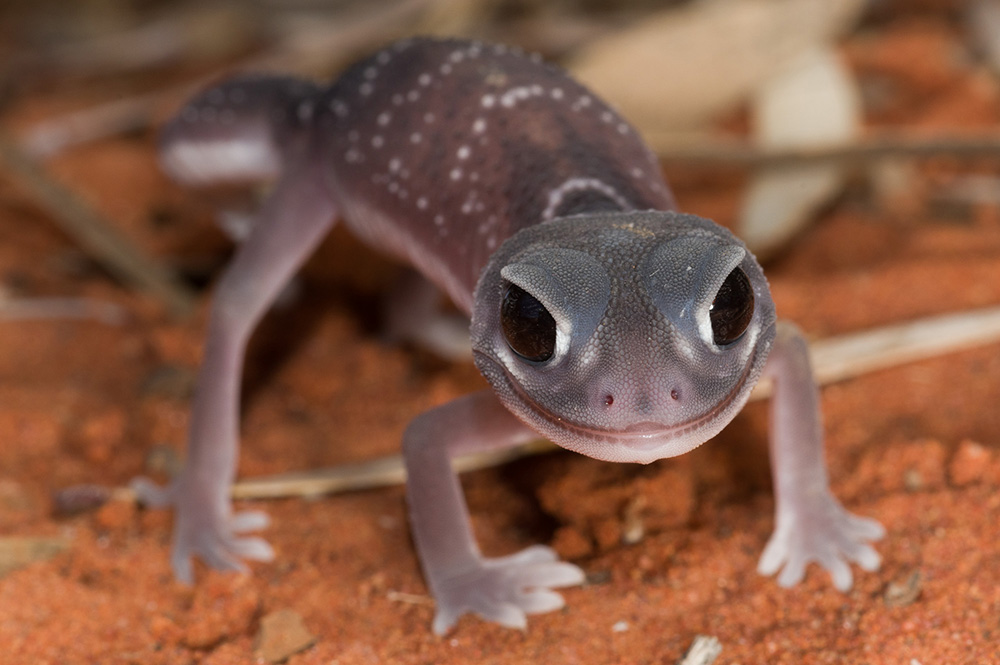 Gab’s ongoing honours project once again involved attaching spool lines to dunnarts and setting up Giving-up Density trials around artificial tunnel refuges (referred to as tunnels from now on) on Main Camp grids. Most of her afternoons were filled with vegetation surveys around pitfall traps that caught a dunnart in the previous three years.

Noosing and pitfall trapping for military dragons (Ctenophorus isolepis) was conducted across five grids at Main Camp with varied results. Our incredible noosing efforts gave us 25 individuals, while the pitfalls yielded 8 (33 dragons caught in total). All animals were given markings on their backs and numbers on their stomachs, enabling them to be identified after their release back to the grids.

‘Open-Field Tests’ (OFT) were conducted by placing individual dragons in 5 x 5 m enclosures with two spinifex clumps for cover, designed to measure exploration and boldness; two personality traits that are proven to be closely linked. The preparation of the yards and recording of lizard tracks after the allotted time period provided everyone with a good weights workout and tanning session (if you could ignore the highly abundant and persistent flies). Movement across the enclosures varied from dragon to dragon, with some individuals only moving two or three meters throughout the 2.5 hour allocated time period, while others did their best to explore every inch of the enclosure. 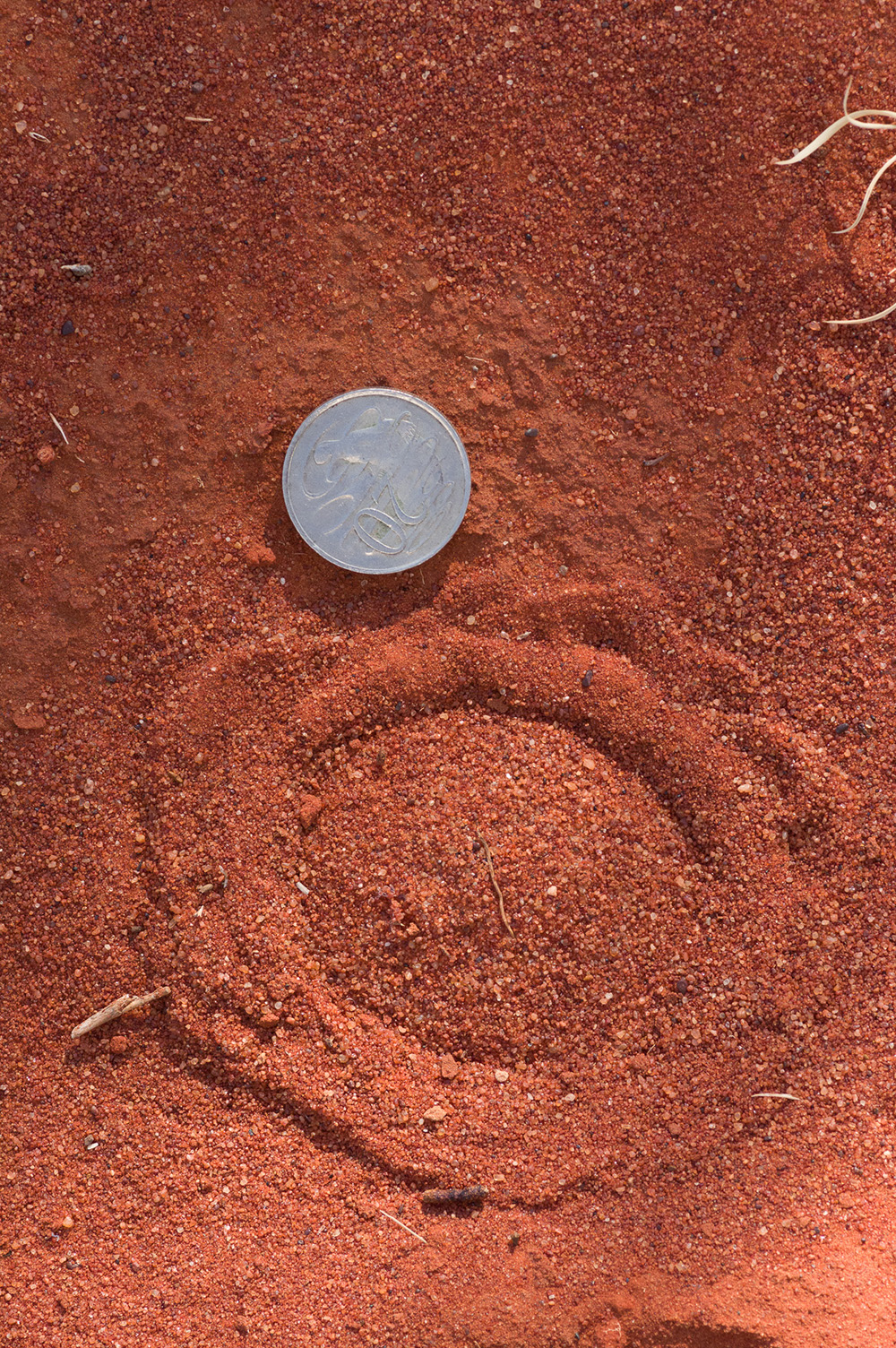 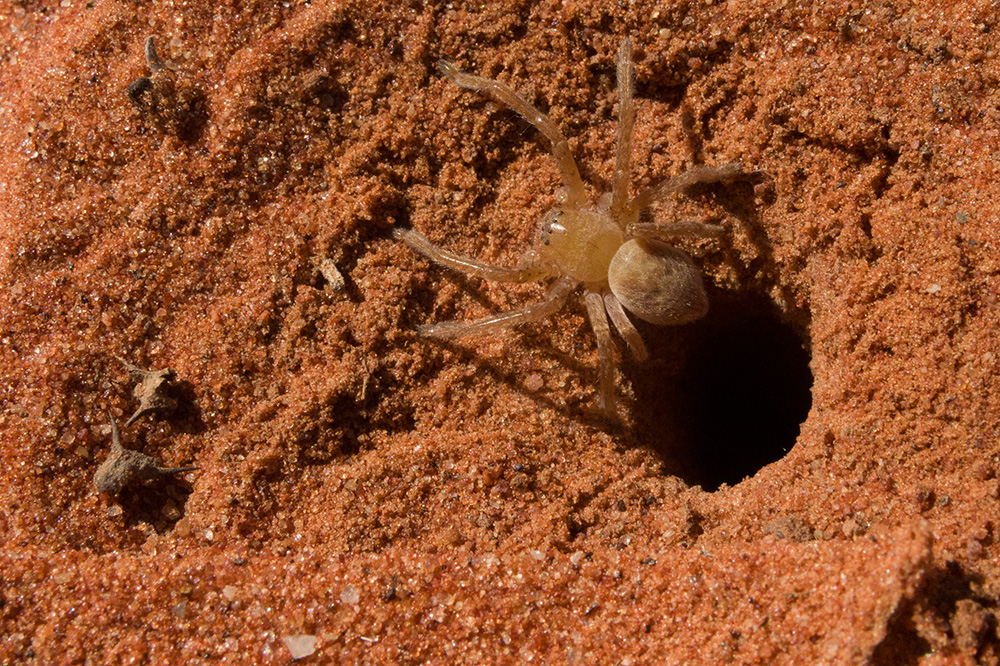 Cameras were set in each enclosure to monitor the time spent out of cover (spinifex) and at 30 pitfall traps from grids 2, 3 and 4 (pitfall selection was based using the overall quality of drift fence and potential ability of clear videos) to monitor the trap avoidance by military dragons. As cameras operate by sensing the movement of temperature differences, half of the pitfalls at each site had a 45x30cm black mat placed around the top of the pitfall to increase the temperate difference between animals and the substrate- hopefully improving the cameras ability to detect dragons.

Naturally, a few things went unexpectedly, most notably a few lizards escaped their enclosures, the majority of which were recaptured. Strong winds also posed a problem during track recording, obscuring a lot of the tracks in the afternoon sessions and making it difficult to record accurately. Interestingly, none of the dragons caught during pit-fall trapping were recaptures from the noosing period.

The final trapping session was conducted at our ‘Mallee traps’. It’s only a few kilometres as the crow flies from our Main Camp, but it looks very different. The area was burnt in 2001 and the spinifex has regenerated to a pretty good point in the 15 years since. Mallees dot the landscape, providing extra shelter. Despite this, our trapping success was fairly average, with just a single Sandy Inland Mouse, a blind snake and a few skinks and dragons captured.

On the June trip, we started paying a bit more attention to a certain type of spider burrow that we sometimes come across in open sand areas. It’s a vertical burrow covered with a loose lid of silk and sand – not a hinged trapdoor, but more like a rug concealing the entrance. On this trip we found the spider responsible and were surprised to find that it looked something like a huntsman. We’ve since had the identity tentatively confirmed as one of the badge huntsman spiders (Neosparassus sp.).