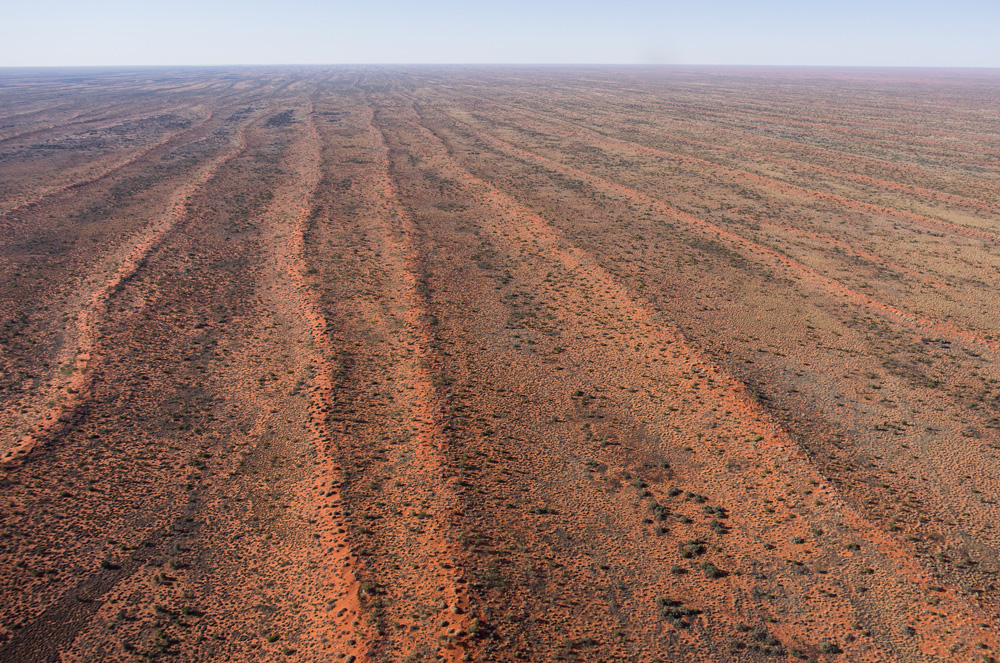 One of the great things about visiting and re-visiting the Simpson Desert is the variability of the region. Every trip is truly different. Some animals are just naturally present in small numbers or have a patchy distribution and are only occasionally seen on certain grids or localities; some plants only crop up once every few years, and the desert always has another surprise in store.

A heat-wave on top of a dry year set the scene for the trip. The small flush of greenery and flowering that was present on our July trip following May rain had dried and withered away to crisps that crunched underfoot. The lack of summer rain and the ensuing shortage of grass seed signified bad news for rodents and other seed eaters. Compared with trips conducted in winter, however, we were hoping for a good showing from the reptiles.

Chris and Aaron’s group (with Eveline, Jenna and Emma) left Sydney on September 17th and called in at Main Camp before travelling out west to the Field River for a few nights. In the meantime, Bobby and Dave left Sydney on the 20th and stayed at Main Camp for their first trapping session, opening grids at Shitty Site and Carlo. During this trapping session, the Field River crew returned to Main camp, and opened the long term grids there. 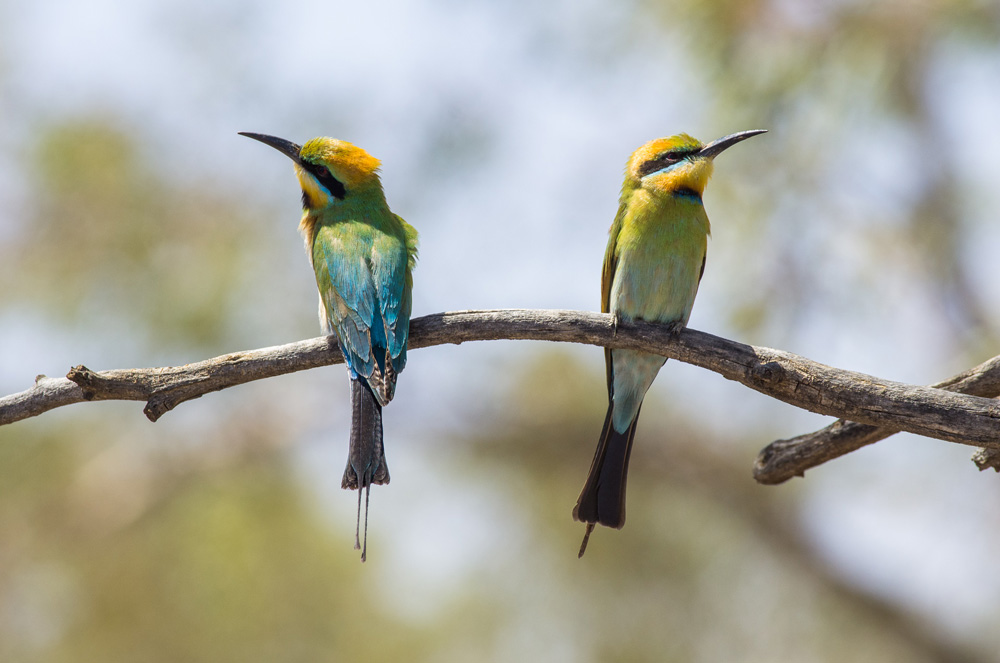 Dave then took a team (Kristina, Monica, Emily and Stacey) out to the far western part of our study area, over the border into the Northern Territory on Tobermorey station. After a three-night-long session here, this team relocated to Kunnamuka swamp for their final round of trapping. Bobby and his crew (Tal, Dave W, Sarah and Sahar) remained at Main Camp and trapped Way Site and South Site, then drove north and trapped Plum Pudding and Craven’s Peak grids. The first group was by then already home in Sydney, having left on the 28th. The two remaining teams reunited at Main Camp for a few short days before packing up and hitting the road.

The short story told by the trapping proved similar, and as predicted, across the region. Mammal captures were very low, particularly in the case of the rodents. ‘Nil mammals’ were recorded at several grids. Reptiles were enjoying the warm weather and were apparently doing quite well. 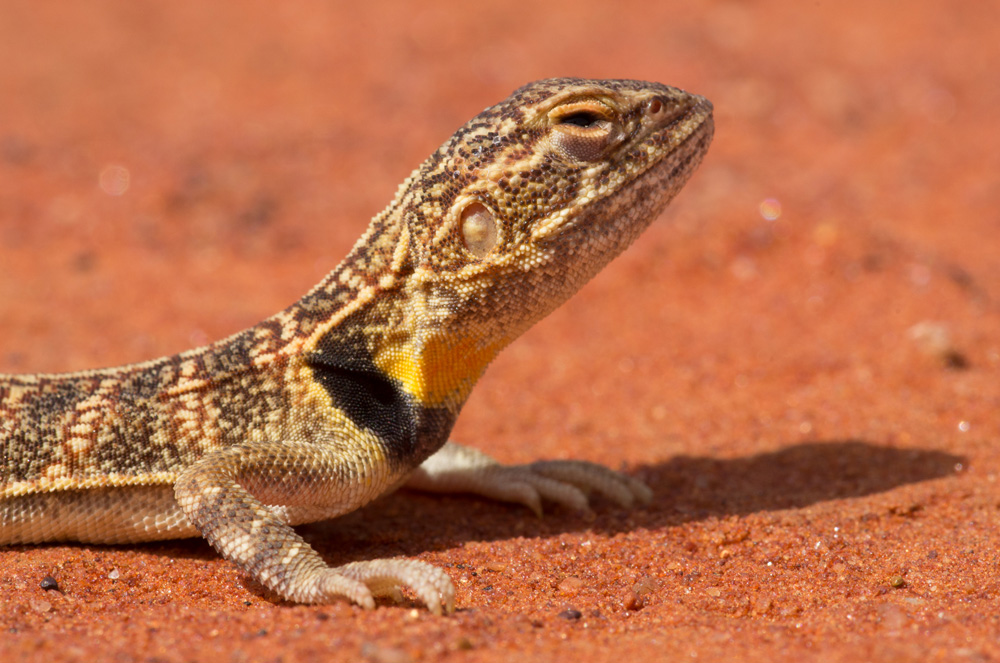 A few captures of note were made. At Shitty Site and Field River, the Collared Dragon (Ctenophorus clayi) showed up – a charming, rarely captured lizard that seems to occur only in restricted patches for an unknown reason. Shitty Site also turned up several nice skinks including the recently described Ghost Skink (Eremiascincus phantasmus) and another ‘occasional’ species, the Wedgesnout skink (Ctenotus brooksi). A beautiful Blue-Tailed Skink (Ctenotus calurus) was also captured on the fire-ravaged Tobermorey grids.

Though not found in our pitfall traps, a number of Thorny Devils (Moloch horridus) were seen on the roads out around Shitty Site and South Site. The first one we found was a big gravid female, so fat and full of eggs she even refused a drink of water. 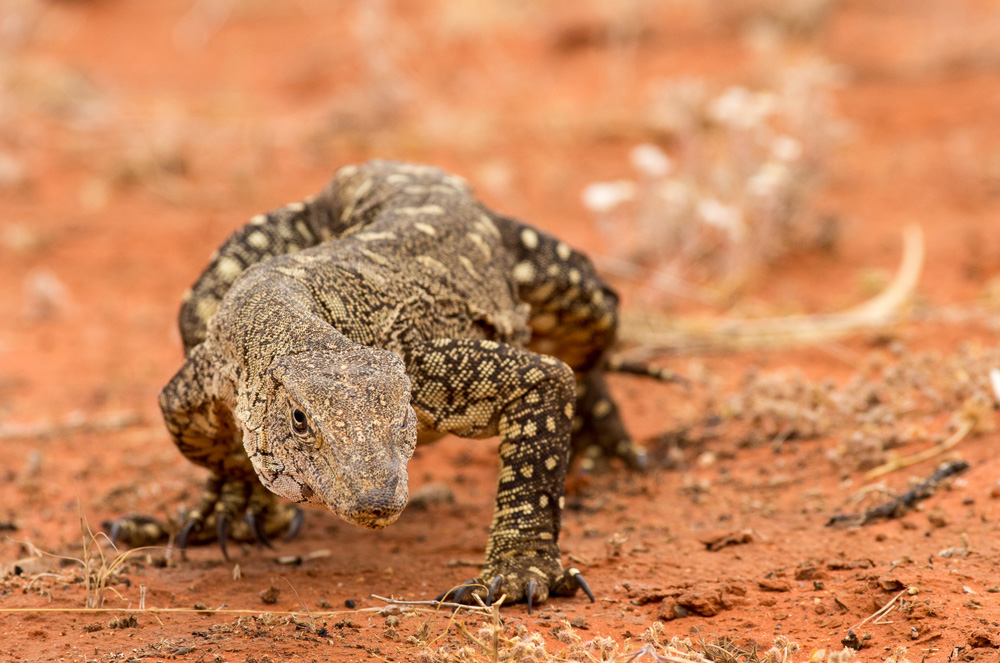 Another reptile that is an uncommon sight in the Simpson is the Perentie (Varanus giganteus). It seems to like rocky areas, so given our ‘habitat preference’ of the sandhills we don’t often come across it. While traversing the rocky range on the way out to Tobermorey, Dave’s team was lucky enough to spot one of these animals. In spite of being ‘only’ half grown at about 1.2 metres this individual was still an impressive sight. In an awesome wildlife encounter, the team was careful not to startle the lizard, approaching slowly and allowing it to continue moving through the area. The Perentie was on the prowl, checking out burrows and ‘sniffing’ around the bases of shrubs by licking the air. So confident was the animal that it showed no sign of aggression and even dropped its body to the ground and closed its eyes in the shade a couple of times. After many photographs were taken, we parted ways. 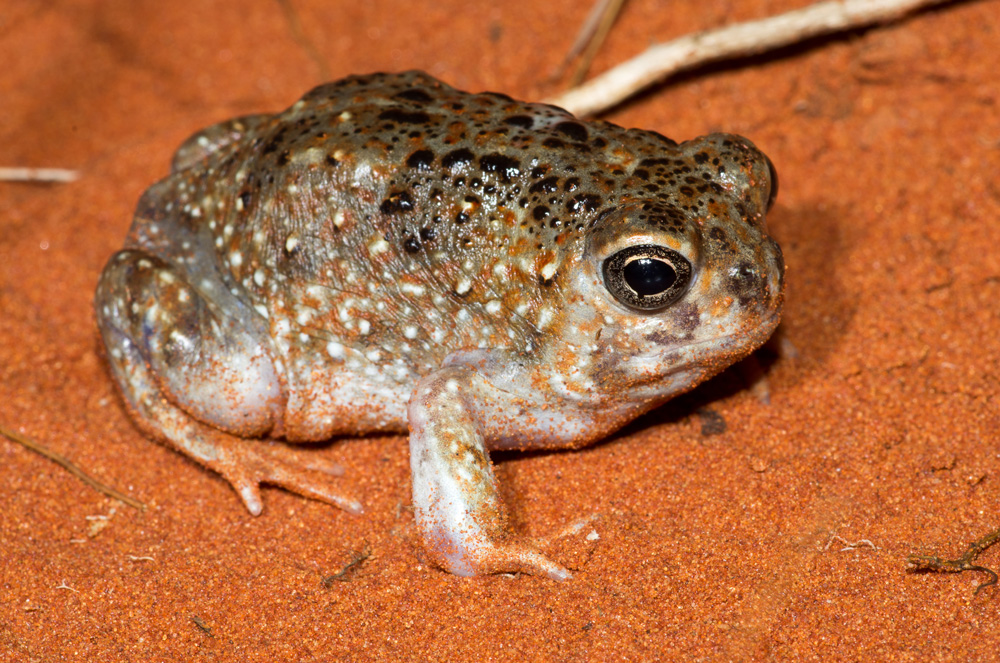 Out at Tobermorey, Dave’s group had some ‘fencing’ to do – replacing the burnt drift fences on the western grids. Just as we had finished a grid and were packing up to head back to camp, the dark clouds that had been gathering all afternoon burst above us. We started driving back through the rain with visions of our gear getting soaked back at camp, but we soon reached the edge of the rain’s extent. The little bit of weather was just enough, however, to bring out just a few frogs from aestivation, and a couple fell in our traps. They were Notaden nichollsi, a fat little termite-eating frog; also an animal that only the lucky volunteers ever get to see. 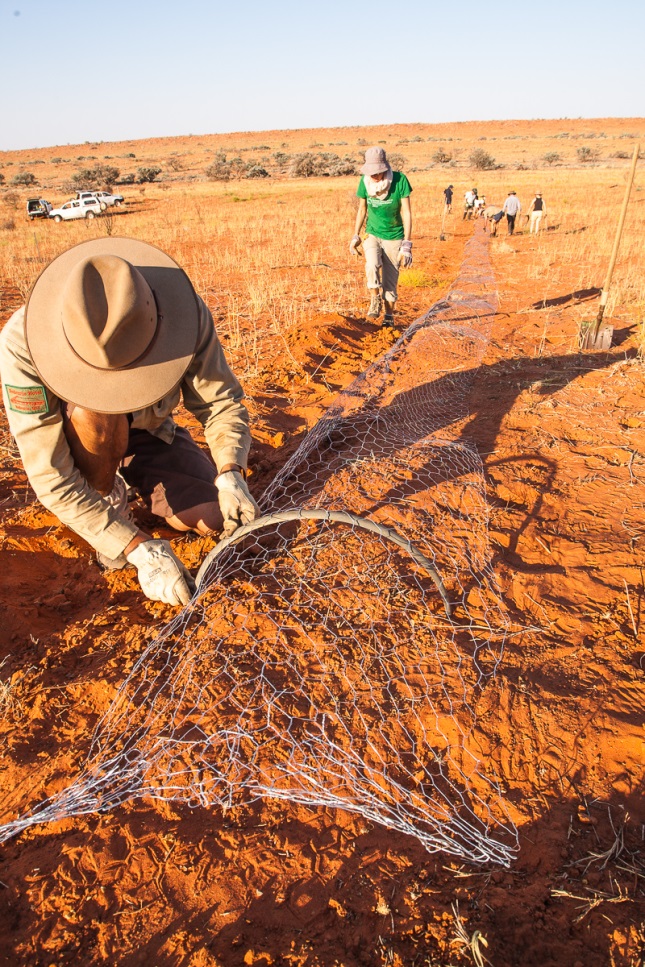 Despite the tough times, cats and foxes are surviving in the desert. Our spotlighting runs and the presence of scats and prints confirmed this. While ‘bust’ periods are a normal part of arid Australia’s ecology, the added pressure of these feral predators on small native animals is thought to be a big problem. However, the ferals are here to stay, so any sort of ‘leg up’ we can give our native animals may just give their populations a bit more time to adapt to the novel predators. One project that is just starting up involves the creation of areas with complete protection from predators. Hopefully, these refugia will be used by native animals for shelter while allowing them to forage and move around, particularly in places with almost no natural cover such as recently burnt spinifex areas. To this end, we made some above-ground ‘tunnels’ out of chicken-wire, 50 m long and about 500 mm wide, dug in to the ground on all sides and supported by metal ‘hoops’. We created four of these on one hot afternoon on grid 8 at Main Camp as part of a pilot study – stay tuned for more work on this project in the coming years.

While some ferals seem to be doing fine out there, we are a bit mystified about some of the others – specifically seven cats. These were caught last year in the area around Main Camp, had GPS collars fitted, then released. These collars record locations for a certain amount of time then automatically detach, after which they can be located from the radio signal they emit. While we’ve successfully recovered four collars that were attached to foxes, only one collar that we attached to a cat has ever been heard from again despite much searching, both vehicle based and from a light aircraft. Since the battery has only a finite life, this trip was the last opportunity to find four of the seven remaining collars. 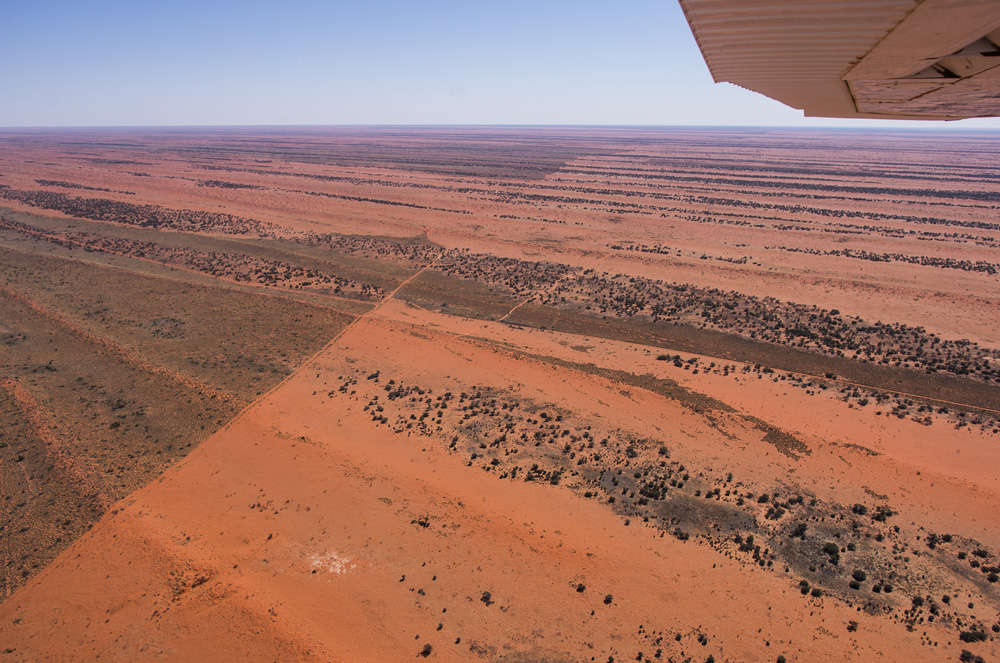 Bobby’s team did some searching by scanning from close to the places where the cats were caught. In addition, we were able to do a couple of hours of scanning from the air from Jim Smith’s aircraft. In the air, we first headed west out to fly over the Field River to no avail. The dune fields in the region had already been searched quite thoroughly, so with this in mind we focused on the Mulligan River and the channel country on the eastern edges of the desert. There were a few waterholes around here and we were hoping that the cats might have retreated to them given the dry conditions. We didn’t have any luck though, so flew west then south again. The signal from the one cat that we’ve detected reliably in previous searches came through loud and clear when we flew over the area south of Main Camp where it’s currently located. So, while we’re still scratching our heads about these cats, we can be pretty confident in saying that either they have moved very long distances to be outside our search area or their collars have failed. At this stage, we’ll probably never know. 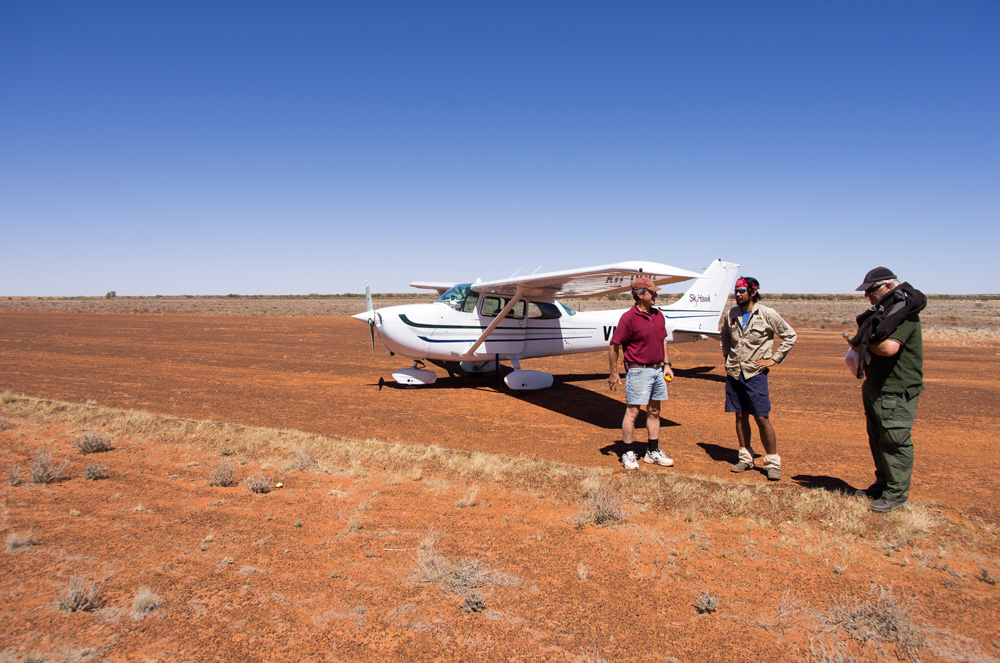 From the air, the perspective on the country we work on below is fantastic to see. Drainage patterns, fire scars, clay pans, water points, animal tracks and rock outcrops are very obvious.

Compared with ‘good’ years, bird life was relatively scarce on the trip. Notwithstanding, we made a few good sightings. The very rare Grey Falcon was spotted at Abudda lakes on Carlo station. Bee eaters brightened up the skies. Whiskered Terns dove for invertebrates at Beach Bore. Bustards peered out of the spinifex at us before hoisting their heavy bodies skywards. A couple of Spotted Nightjars sat resolutely still despite being photographed from only a metre away. A Brown Goshawk (or was it a Collared Sparrowhawk?) glared down imperiously from a tree near Oil Bore. A big flock of budgies was spotted south of Main Camp, and zebra finches hung around water points. Brolgas were spotted regularly. 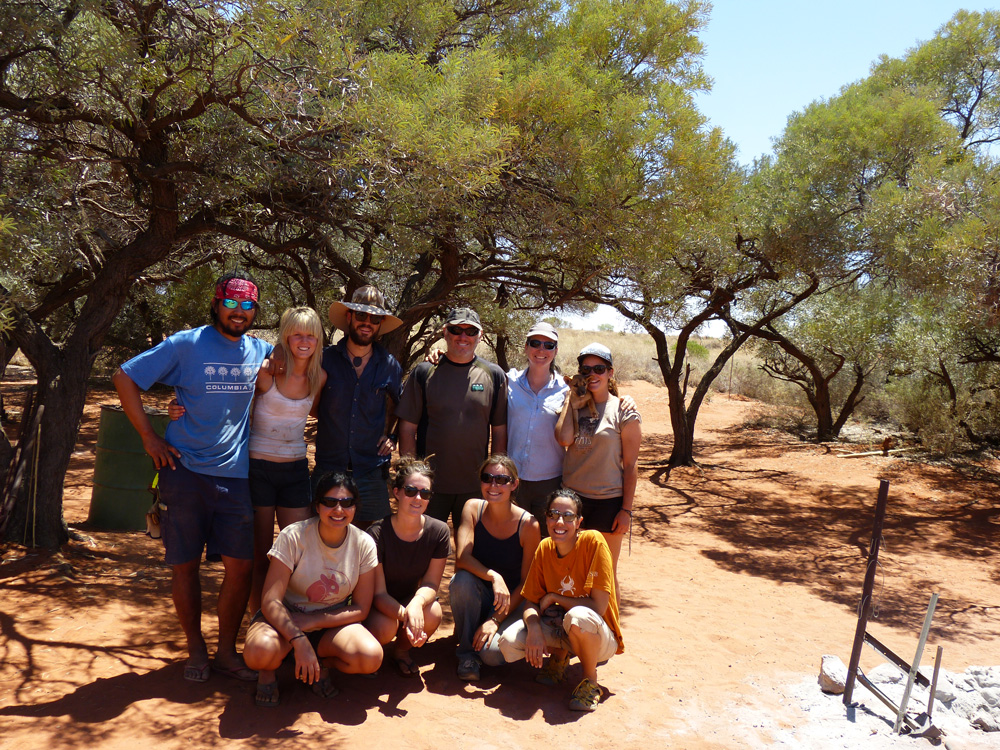 In conclusion, it was a diverse trip – despite the somewhat sparse captures from trapping we were all treated to some fantastic close encounters with wildlife.