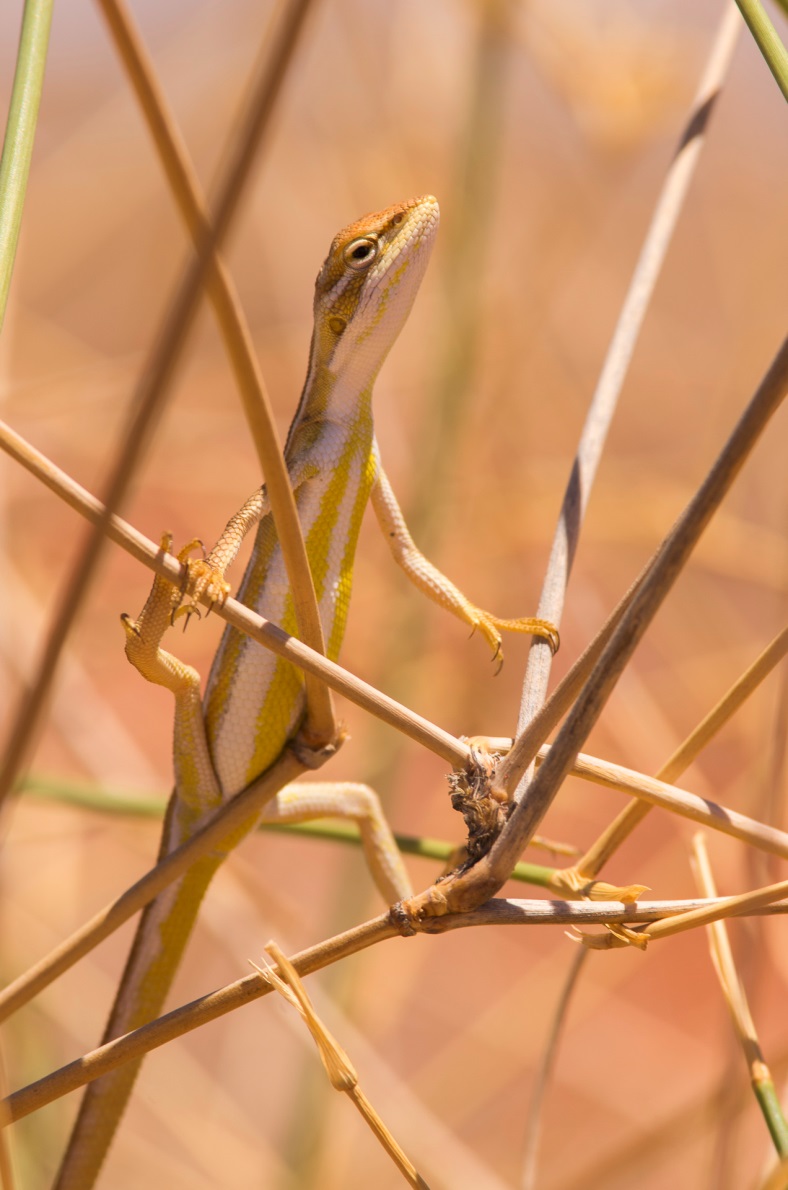 Diporiphora winneckei, sitting out on canegrass in the middle of the day. The species aligns its slim body with the sun’s rays to minimise the heat absorbed. Photo: David Nelson

As one might imagine, it is pretty hot in the Simpson Desert in summer. The typical day begins with a glow in the east and thirsty flies at 5:30 when it’s about 25° C, then the temperature begins to climb as soon as the sun does. By midday it’s already 40° C and it just stays hot. In fact, it doesn’t start to cool below that point until about 6 pm, an hour before sunset. Bedtime is before 10 pm, when the mercury still registers something like 33° C. The temperature in the shade got up to 43° on our hottest day, and venturing out of the shade one is met not just by the intense rays from above, but also a blast of radiant heat coming off the iron-rich sand.

Why visit the desert in summer? It’s actually a good time to capture lots of animals. While the middle of the day is marked by general inactivity when animals take shelter in the shade or other refugia, the morning and evening periods see plenty of life out and about on the dunes.  For nocturnal animals – reptiles, mammals and invertebrates alike – the warm nights are perfect for foraging or hunting.

The other aim of the trip was to conduct part of a study for Eveline’s PhD. Eveline will be looking at how predation shapes the differences in the ecology of two common species of dragon in the Simpson – the Central Netted Dragon (Ctenophorus nuchalis) and the Military Dragon (Ctenophorus isolepis). For this trip, we were to place plasticine models of both species in various microhabitats and examine what predators were attempting to attack them. 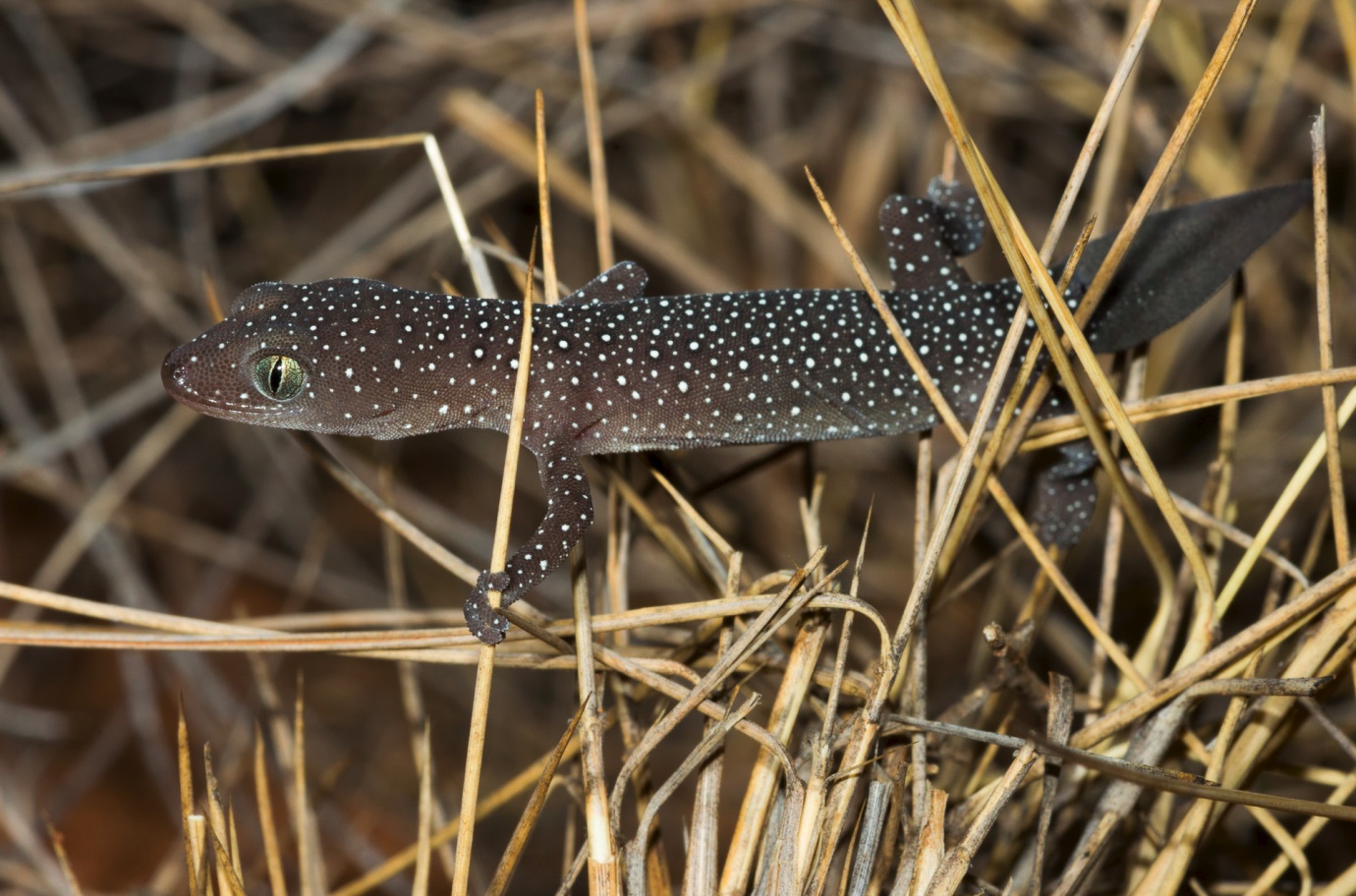 And so, late November saw a small team of four arriving on Ethabuka after a journey of three days. Highlights of the journey included finding the beautiful Jewelled Gecko Strophurus elderi in the spinifex around Windorah after escaping the heat with a dip in the Cooper Creek.

With only a small workforce available and five grids to trap during the trip, we conducted a trapping session with three grids (1, 2 and 4) followed by a second session of two grids (10 and 11) at Main Camp. We cleared and processed as early as possible before the day got too hot, and captures weren’t particularly high so we were able to finish in good time. 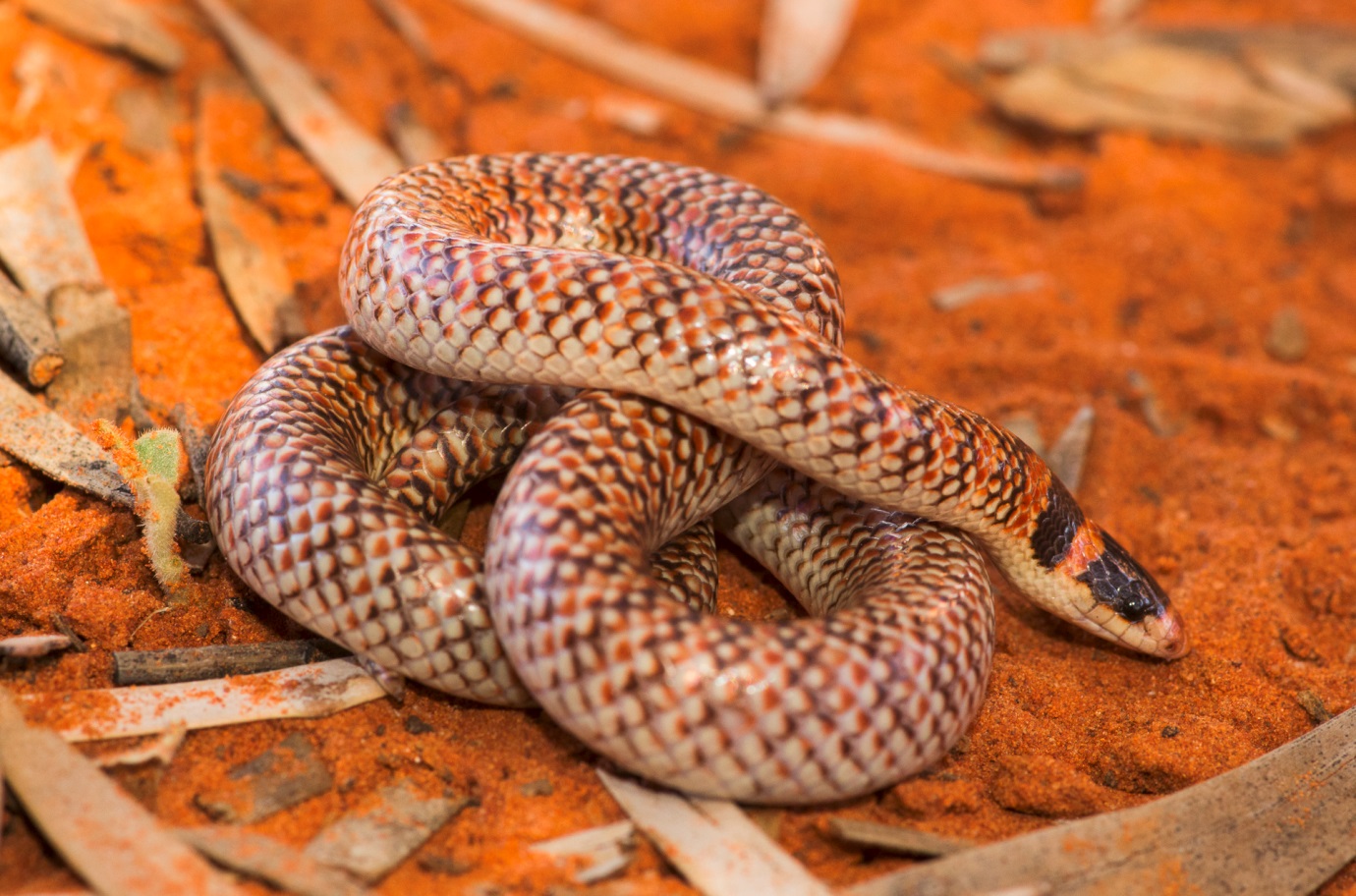 A few notable captures were fished from the traps. On the reptile front, the Narrow-Banded Shovel-Nosed Snake (Brachyurophis fasciolatus) is a beautiful small elapid snake that’s only rarely sighted. The Sharp-Snouted Legless Lizard (Delma nasuta) and the Yellow-Tailed Sandslider (Lerista aericeps) are also only occasional captures. We also trapped quite a few large scorpions – two species of Urodacus of massive proportions.

A smattering of mammal species was captured. The highlight was probably a single Desert Mouse (Pseudomys desertor). This is a species that used to be much more common in the early days of the project, but is now absent for long periods, popping up in limited numbers during the last boom. It’s a large mouse, with dark shaggy fur and an orange eye-ring. 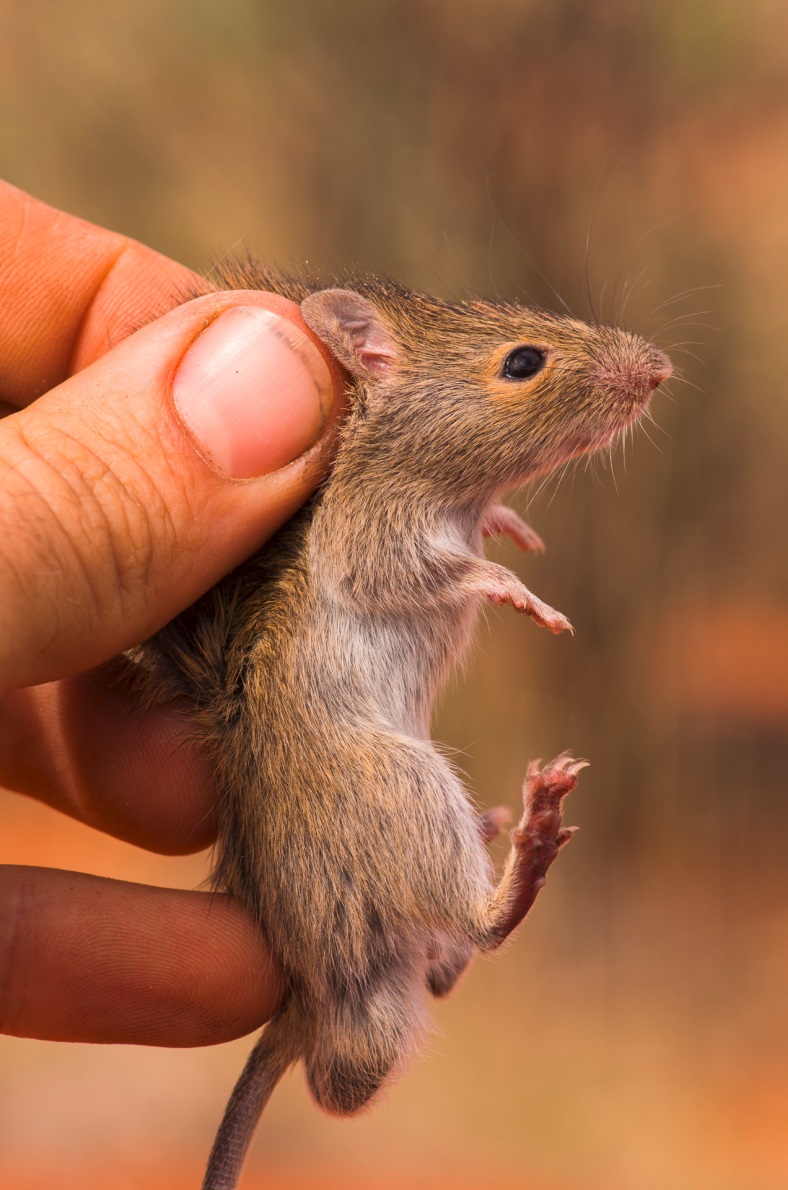 Outside of the traps, we made a couple of nice reptile sightings – three Pygmy Mulga Monitors (Varanus gilleni) were spied in dead gidgee just north of the Ethabuka-Carlo gate. A King Brown Snake (Pseudechis australis) was spotted hunting at night just off the shot-line road near grids 10 and 11. A couple of Long-Nosed Dragons (Amphibolurus longirostrus) could often be seen in the tops of the gidgee trees at Main Camp, well camouflaged amongst the twigs and foliage. Perhaps they were keeping clear of the two Sand Goannas (Varanus gouldii) that were frequently seen casually patrolling camp or digging around the trees. Finally, a single Thorny Devil (Moloch horridus) beside the main road near camp was spotted enjoying some morning sun. 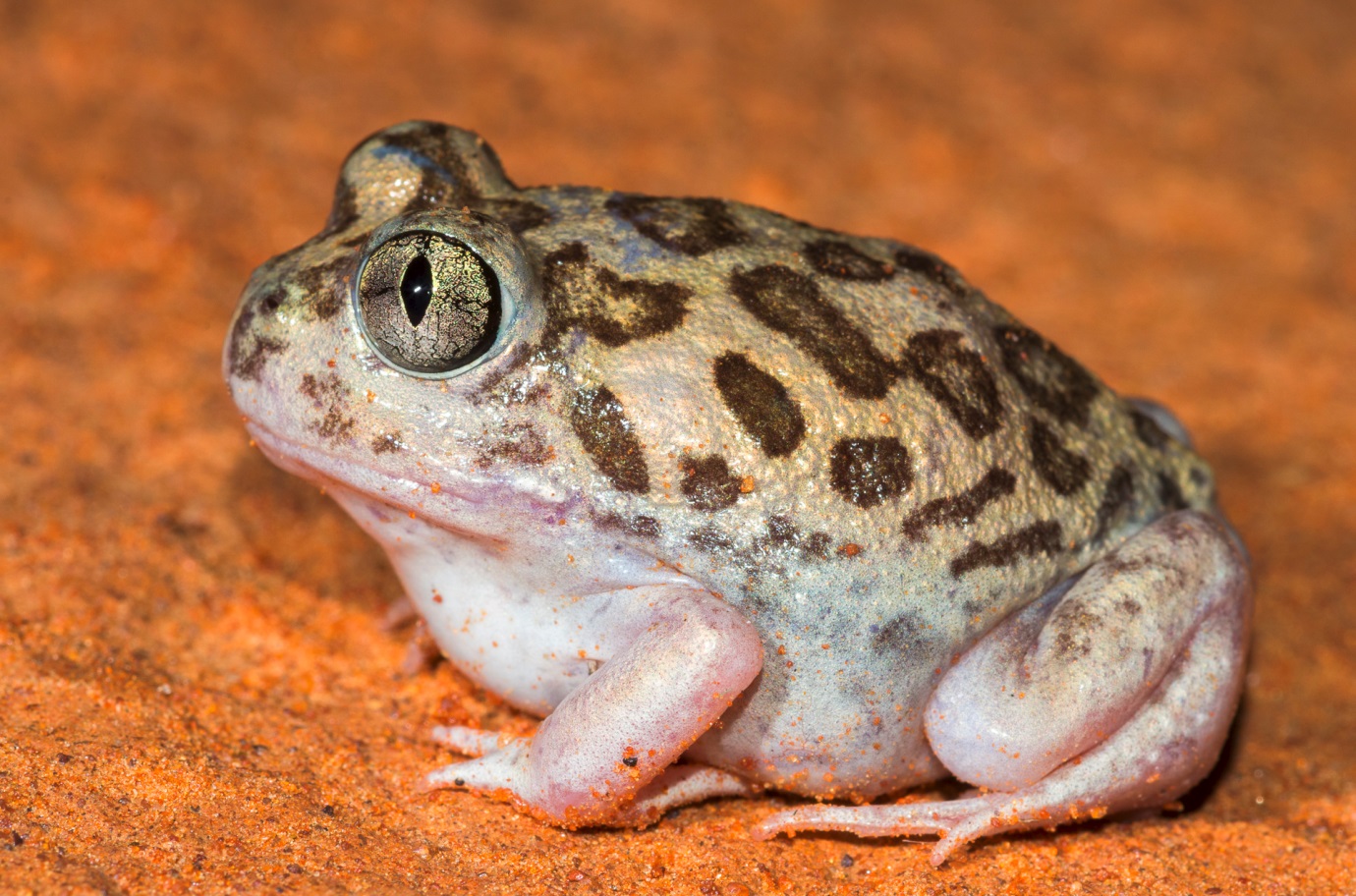 Around 10 mm of rain fell on the property the night before we arrived – just enough to dampen the sand and fill a couple of puddles in the claypans. While this wasn’t enough to bring up any vegetation, it did bring a couple of Desert Trilling Frogs (Neobatrachus sudellae) to the surface. As one of these frogs was being photographed on the sand, it gulped down several flying ants and beetles that landed near it, attracted to the lights.

For Eveline’s research, we placed 300 model dragons out amongst the spinifex and monitored them for predation attempts. Models of each species were arranged in a group with one in each of five microhabitats – within a spinifex clump, next to spinifex, in the open, amongst dead spinifex/leaf litter or perched on a log. The five models within a group were placed within 100m2 and groups were spaced 500m apart to control for predator independence. The models were set up from camp along the main road heading North into Carlo. Half of the groups were placed in burnt vegetation and the other half in unburnt habitat for comparisons later in the study. They were then examined every day in the morning and afternoon, and evidence of attempted predation and the probable perpetrator recorded.

The only minor glitch in this study was that some of the plasticine wasn’t able to stand up to the high temperatures on the sand, and became quite melted. This made it hard to see what attacks might have happened and also made it difficult to justify comparing melted models with solid models. 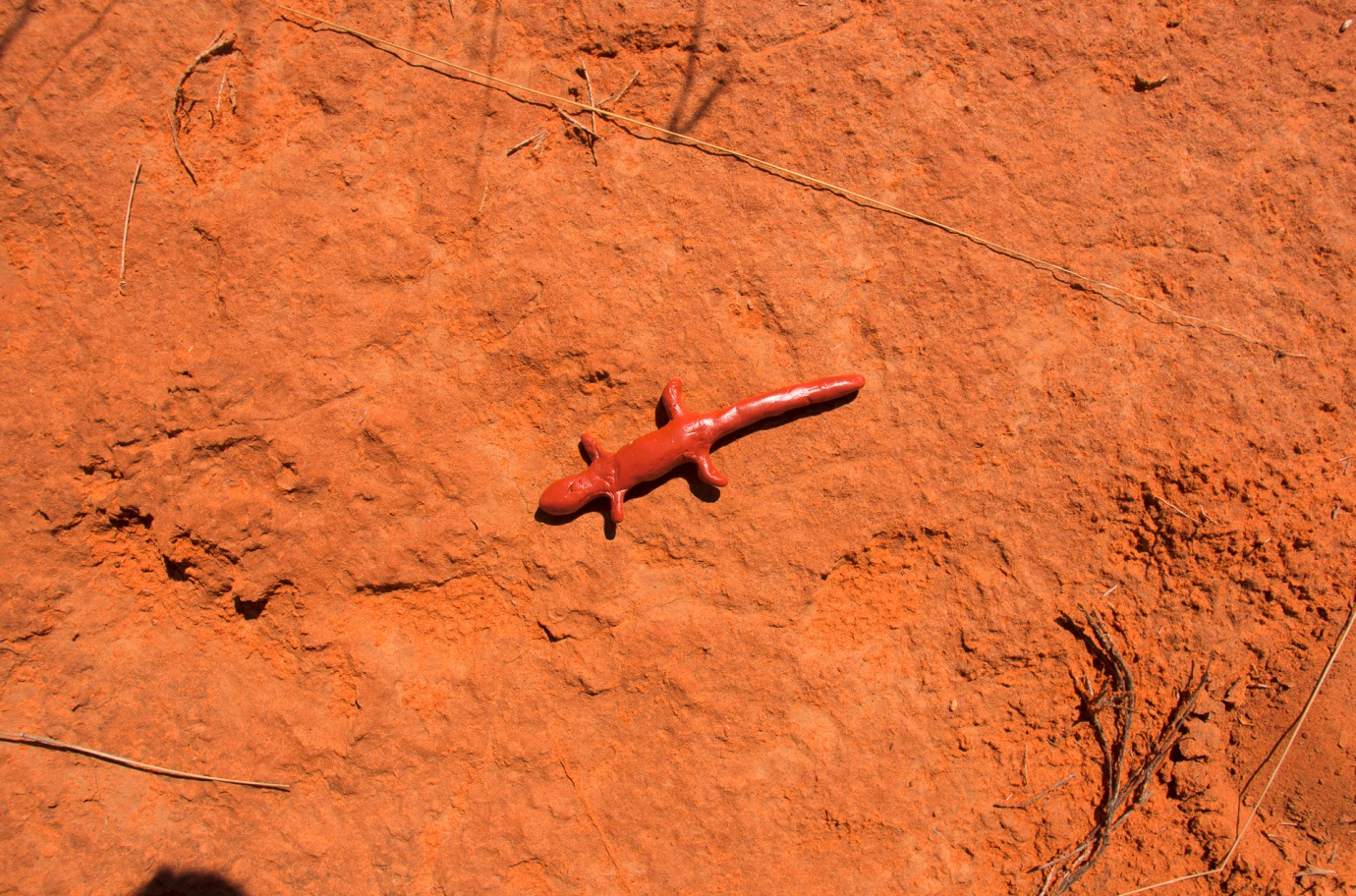 One of the plasticine models of Ctenophorus isolepis in the ‘open’ microhabitat. Photo: David Nelson

We also took the opportunity of the somewhat cooler evenings to try to track the radio signals of the GPS collars in the area (see previous trip reports for details on these). Though we picked up the signal from the ‘homestead cat’ that has been reliably heard since its deployment, we weren’t able to hear ‘bips’ on any other frequencies. We did notice that the signal was much clearer at night compared with the day time. 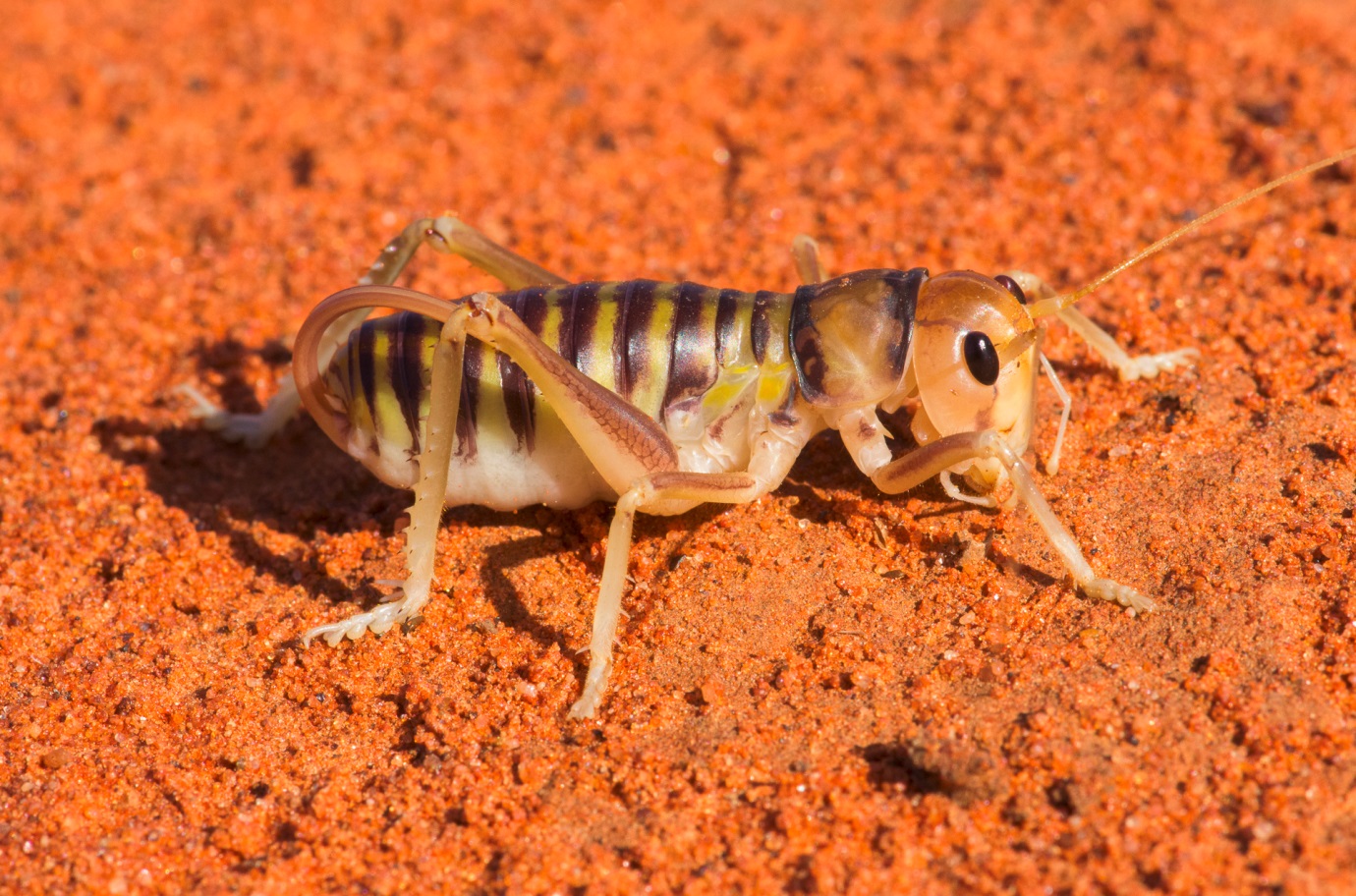 Our last job for the trip was to travel out to Tobermorey to replace the weather station at the western site. This is always a pretty pleasant drive, and it’s great to see some of the other country out there. Eveline took the opportunity to practice her dune driving and despite a little apprehension had no problems. With the old weather station and its solar panel swapped for a brand new one we returned to base.

All in all it was a successful, fairly straight-forward trip, and the crew put up with the heat admirably to get the work done without a hitch.