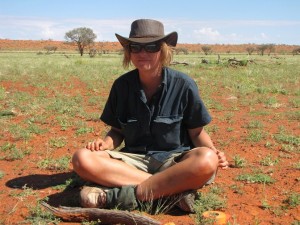 Predators can depress populations of their prey but often have subtle and surprisingly positive effects on the broader communities to which they belong. I am interested in investigating complex predator-prey interactions and vertebrate diversity in the Simpson Desert, Queensland. Primarily, my project seeks to disentangle the complex effects of two dominant predators – the introduced red fox (Vulpes vulpes) and native sand goanna (Varanus gouldii) – on small prey in the Simpson Desert, and identify their different roles in depleting and enhancing the rich small mammal and lizard faunas that characterize the inland regions. Specifically, I am interested in exploring the dietary preferences of dingoes (Canis lupus dingo), red foxes, cats (Felis catus) and goannas and the habitat use and population dynamics of four different species of goannas.