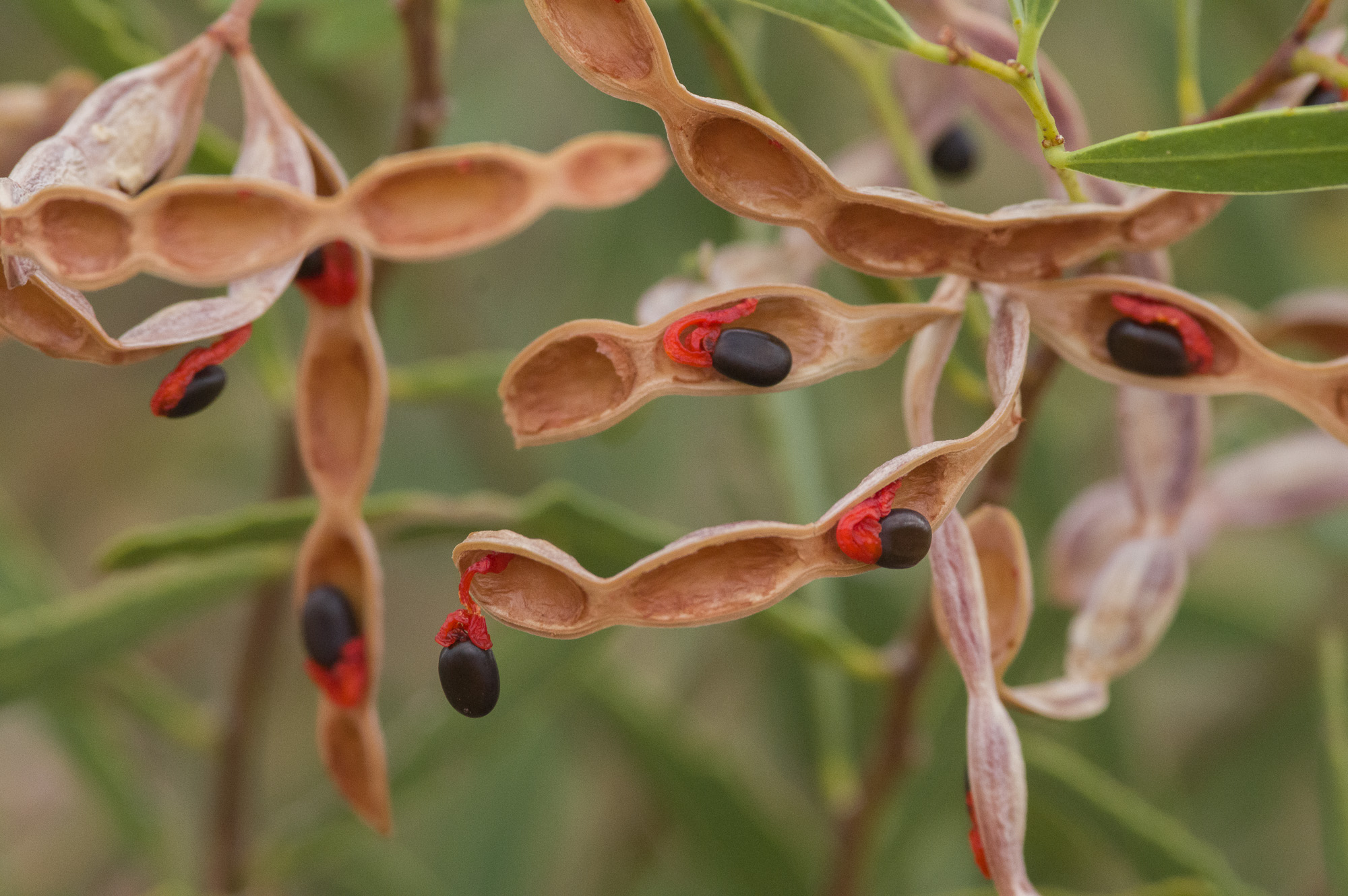 As we drove into the small Western-Queensland town of Bedourie on our way to the Simpson Desert at the start of November, we began to wonder if we would make it out to our study site at all. The cars on the main street were plastered with mud, and thick chunks of clay were sliding off the wheel wells onto the street. We’d encountered some rain on the drive already – some out around Nyngan and Bourke, and more as we crossed the Channel Country. It doesn’t take too much to make the dirt roads impassable out there, and it looked like there was some serious rain around.

We left town and headed for Ethabuka. The rain was really coming down and some areas were getting pretty wet with vast sheets of shallow water lying over flat areas and small rivulets running in the gullies. Luckily the road wasn’t terribly soft yet, though there were some slippery sections.

After a couple of vehicle issues we arrived at the homestead quite late in the day, taking up the kind offer of staying dry in the shed for the night and joining Bush Heritage staff Matt and Amanda and other visitors for a BBQ.

The following day dawned clear and bright. After investigating the state of the track to Main Camp, Matt pronounced it too wet and soft to drive on. Eveline was able to get to camp with Anthea in the little ‘side-by-side’ vehicle (which doesn’t wreck the roads when wet), while the rest of us waited and relaxed at the homestead. Luckily, after a day of hot sun and dry wind, the roads were mostly passable again. The only evidence of the rain was a few puddles and a bit of water remaining in the claypans.

There wasn’t any trapping required for this trip, instead we were focussing on two of Eveline’s PhD experiments and visiting our 13 weather stations to download data and perform checks. 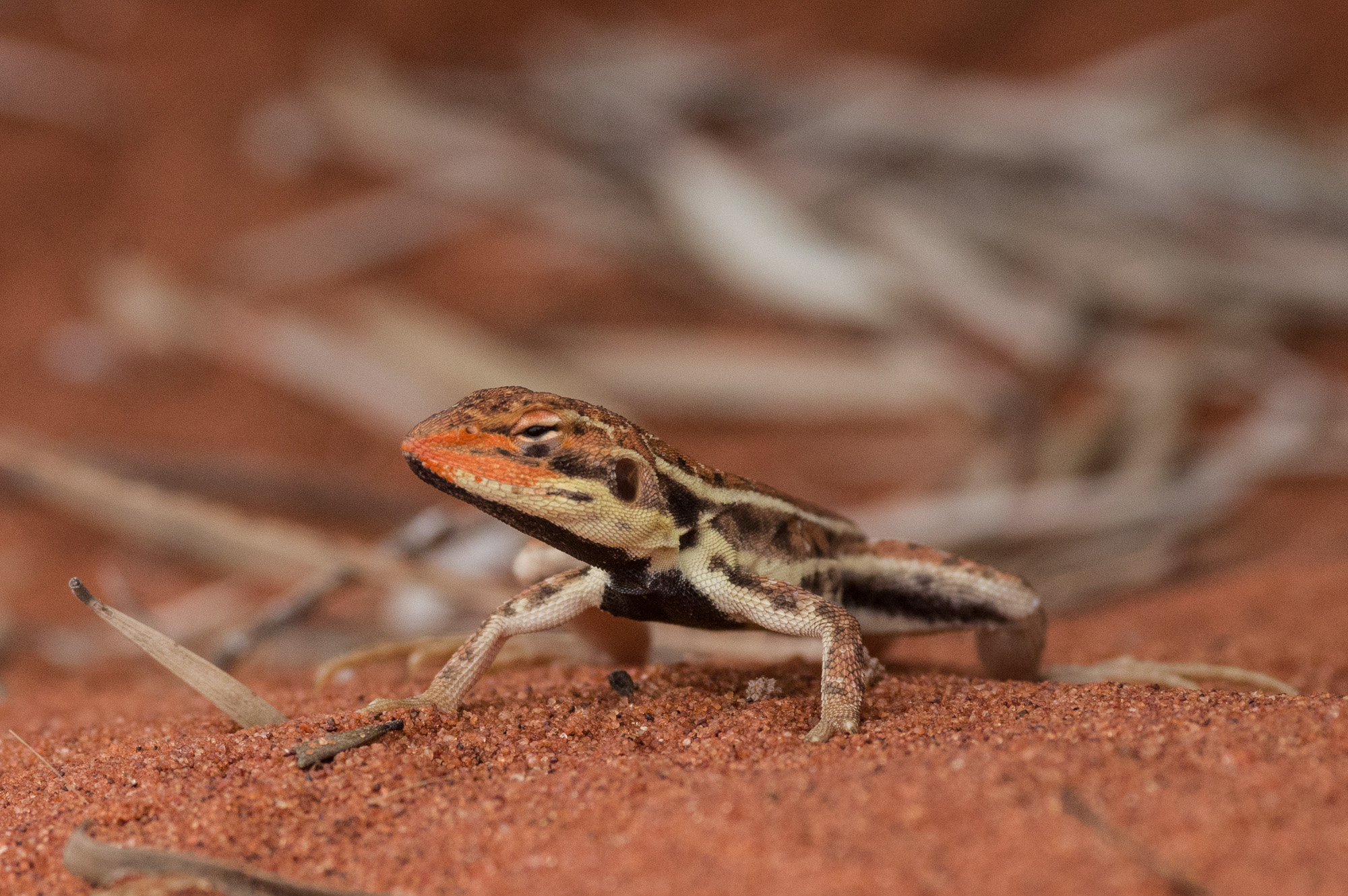 One of Eveline’s experiments explored how military dragons (Ctenophorus isolepis) change their habitat selection under different predator pressures. Dragons were caught and released into one of three field enclosures. Catching was done with the trusty fishing rods and all volunteers were turned into expert dragon catchers by the end of the trip. After a night of acclimatisation they were kept in their enclosure for two experiment days. On one of those we flew a kite in the shape of a raptor during the day in the middle of the enclosure. The kite acted as a predator cue which was thought to change the habitat selection of the residing dragon. The dragon could select between four habitat densities inside the enclosure, 100%, 50%, 25% and 0% spinifex. On the other experiment day we took the kite down and let the dragon make its selection free from extra predation pressure. This set-up provides us with a comparison of normal and stressed behaviour of the same animal, overcoming individual personality differences.

We used track counts to quantify habitat selection and activity in and around different habitats. We swept a 1m wide stretch around all four habitat plots to capture all activity in, out and around the plots. Some windy days and one dust storm made tracks harder to read on some days but tracks were mostly clearly visible.

The enclosures were in good shape but needed some fence repair work to keep the dragons in for the duration of the experiment. We lost a couple of dragons through holes in the plastic walls before we spent some time replacing and plugging. We managed four replications on all three enclosures, giving us data on 12 individuals. We had a couple of surprises throughout the experiment, notably discovering snake tracks throughout one of our enclosures warranting a very cautious approach on that particular morning. The dragon survived its unexpected visitor without any visible damage.

To check if the kite was indeed perceived as a predation risk Eveline conducted a second field experiment. At two locations, a kite was set up to fly on alternating days. We cleared and swept fourteen sand plots daily to record the tracks of passing dragons. The tracks were used as a measure of dragon activity. If dragons were stressed by the kite, then the number of tracks should decrease on days the kite was up compared to the days the kite was down. Having a first look at the rough count data it seems this is indeed consistently the case.

Dave visited all four properties over a few days to download and check the weather stations, giving him and any accompanying volunteers a snapshot view of the region. Field River in particular was looking quite spectacular, an oasis of lush regrowth sprouting from the bases of burnt eucalypts, dense grass and verbine (Cullen sp.), and mat-plants covering the soil. 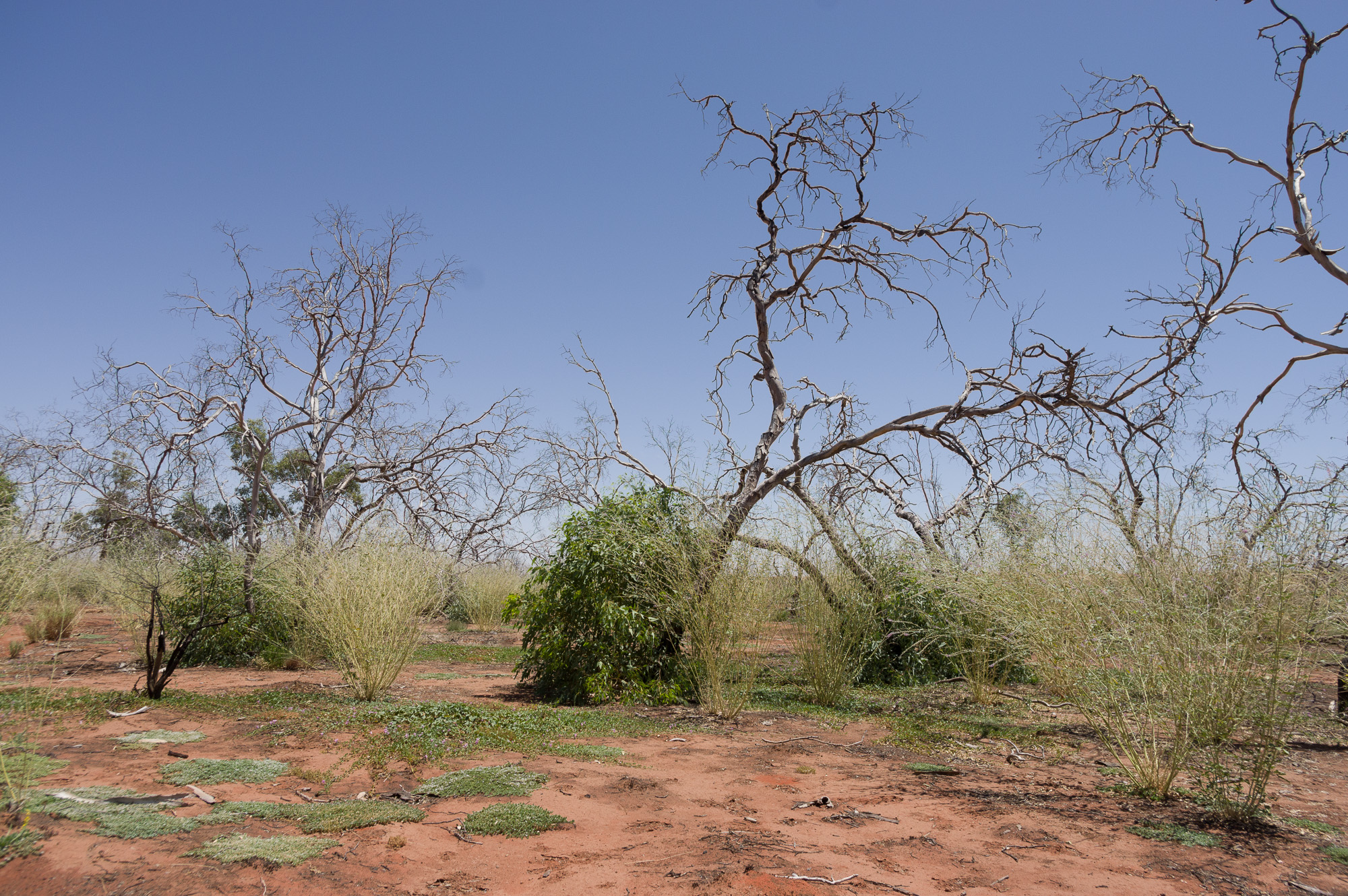 On our drives around the properties we saw a few interesting things. While stopping for a lunch break on Carlo we spied a tiny goanna on the tree that we were resting under. It was a Pygmy Mulga Goanna, Varanus gilleni – a species that we don’t often see out there as it lives and shelters in the gidgees. Another one turned up at camp a day or two later. We also saw a couple of dingos on Carlo near the boundary with Ethabuka, including a handsome black-and-tan individual.

Some of the claypans held water for a few days and became home to shield shrimp and ostracods. These crustaceans hatch from dormant eggs in the mud, and grow extremely quickly in the shallow muddy water. The water didn’t last long anywhere though, and it seemed that most of the shrimp perished before maturity. For many of the desert’s inhabitants that’s the reality of life. 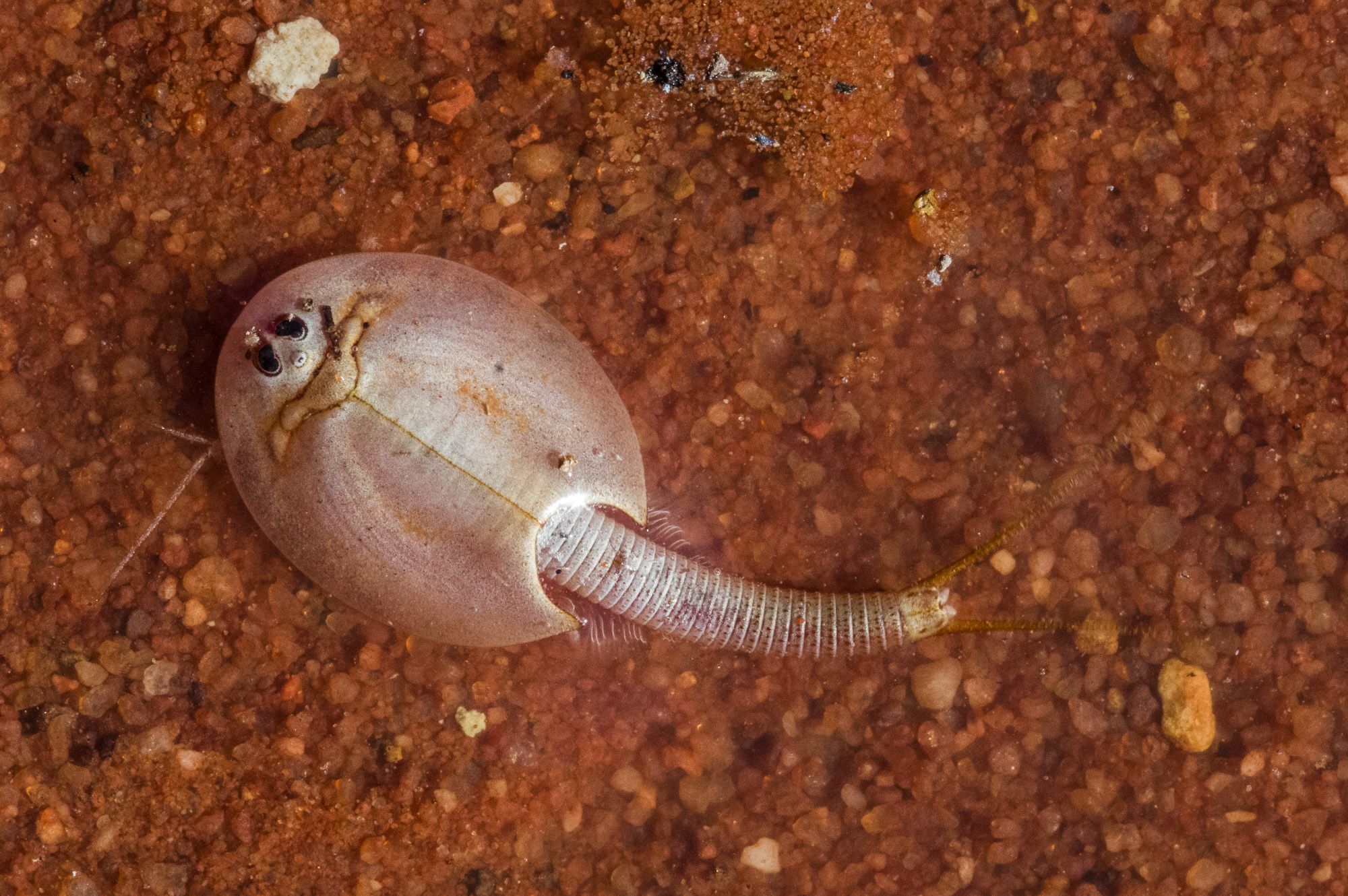 We saw some spectacular flowering from a couple of plant species – all the more brilliant for their contrast with the rest of the flora out there which isn’t doing much at all given the ongoing dry conditions. These included Newcastelia spodiotricha, Beefwood (Grevillea striata) and native orange (Capparis mitchellii) all surrounded by clouds of pollinators.

As on most summer trips, we tried to avoid exerting ourselves in the middle of the day. Apart from the rain on the day we arrived (about 13 mm at Main Camp) the weather was dry and fine. Most days got above 40° C and it got up to 44° C on one occasion. Nights were quite pleasantly cool however, sometimes getting below 20° C. 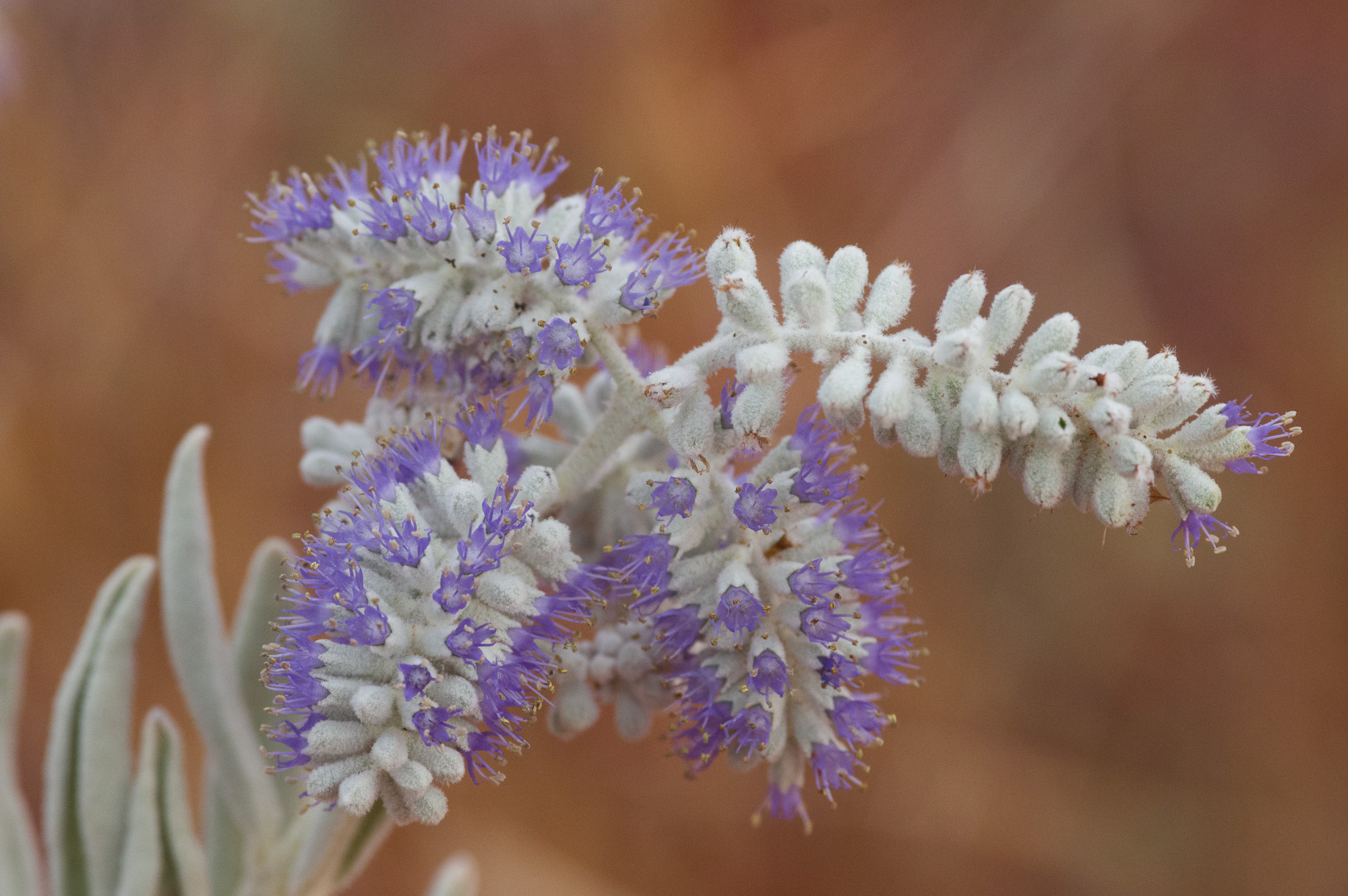 Late one afternoon Nik noticed a large dark plume on the horizon, and as the light faded it got closer, finally reaching us on a strong breeze just before dark. It was fine dust blowing on the wind and didn’t really present any problem. Not so for the sand whipped up by a windstorm the following evening just as we were cooking! So unpleasant was this event that we sheltered in the cramped caravan for the evening before retiring to our sand-filled, flapping tents!

A small pilot study was conducted this trip by placing a couple of fresh kangaroo carcasses out and monitoring the visitors to them with remote cameras. It was a success in that the carcasses attracted a good number of predators that were caught on camera (Ravens, Wedge-tailed Eagles and Dingos). The full-scale experiment will hopefully look at interactions of native and introduced predators at such carcasses. 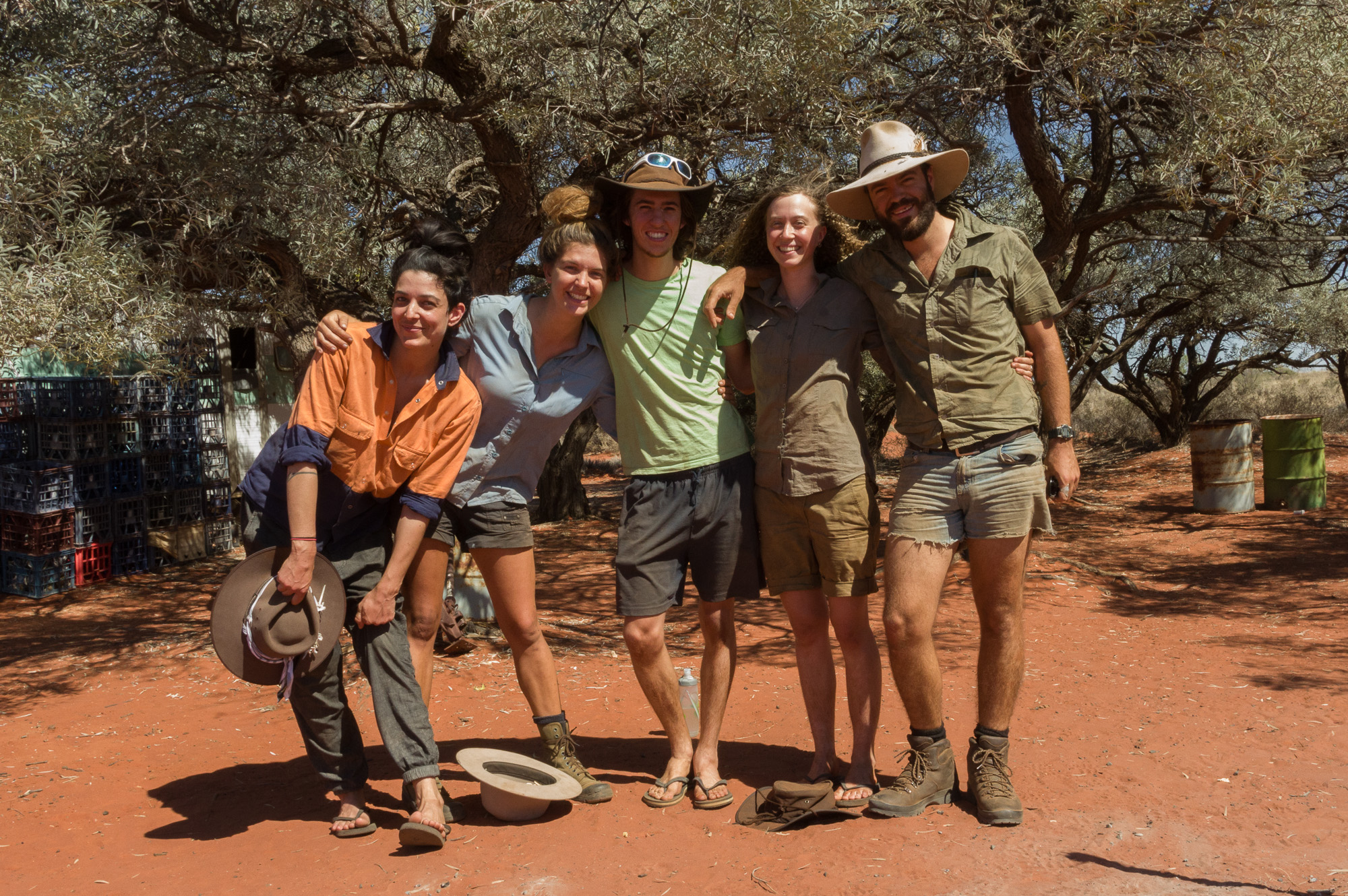 By the end of the trip it was pretty clear that the rain that fell at the start hadn’t really been enough to do much to the country out there. Only about 13 mm fell at Main Camp, and the conditions out there have been pretty dry for a while, so it’ll take more than that to really have a large effect.